Bioprosthetic valve fracture and remodeling (BVF and BVR) are part of the therapeutic arsenal in patients undergoing treatment of bioprosthetic valve failure through the implantation of a transcatheter heart valve (THV), also known as valve-in-valve (ViV). In simple terms, BVF and BVR consist of the use of non-compliant balloons inflated at very high pressures to modify the structure of a surgical valve.1 When the surgical valve ring is broken by this ballooning, the procedure is known as BVF, and when just a forceful dilation of the frame takes place with some structural modification, it is then known as BVR.

The rationale of BVF and BVR relies on patient-prosthetic mismatch (PPM). PPM consists of an incompatibility between the area provided by a prosthetic valve and the flow demands of an individual patient, represented by a mathematical relationship of effective orifice area (EOA) of the valve divided by the body surface area (BSA). Conventional ViV procedures consist of the implantation of a THV inside a relatively rigid structure whose ability to further dilate is limited. As such, implanting the THV inside such a constrained device can lead to the "Russian doll" phenomenon leading to residual stenosis, as demonstrated by data showing that elevated post-procedural gradients affect almost a third of aortic ViV procedures.2 While post-procedural gradients have not been consistently shown to be associated with mortality in ViV,2-4 they serve as a marker of PPM. One of the most significant factors affecting outcomes in aortic ViV is pre-existing PPM (i.e., PPM present before ViV). One can understand this concept as the mismatch existing at the time the index surgical valve was originally implanted, present over the long-term and prior to the patient's ViV procedure. Severe pre-existing PPM, encompassing around 10% of aortic ViV cases, was associated with a significantly higher 1-year mortality in a multivariate analysis5 and also with higher rates of reintervention over long-term follow-up.3 Similarly, a smaller true internal diameter (ID), another surrogate for pre-existing PPM, is also a significant predictor of long-term mortality in aortic ViV.3

Thus, BVF and BVR address the problem of PPM by dilating the failed surgical valve and allowing for the implantation of a better expanded and occasionally larger THV than would have been otherwise permissible, which tackles the issue of suboptimal hemodynamics and may potentially improve durability.6 The optimal scenario for BVF and BVR is where there is the greatest need of improved hemodynamics, such as small surgical valves (especially when the true ID is below 20 mm), and the lowest risk of complications, including known capability for fracture or dilatation and low chance of coronary obstruction. It is therefore clear that one must know whether the surgical valve at hand can or cannot be fractured. Tables are available with information about which valve models can be fractured and the pressure required during these procedures.7

BVF was first performed in the pulmonary position in 20148 and then described in the aortic position by Danish operators in 2015.9 The procedure only gained traction around the end of the decade when the largest experiences were published. In the most significant North American cohort, investigators from eleven centers reported the 1-year outcomes of 139 consecutive cases.10 The mean true ID was small among these cases (19.0 ± 2.1 mm) and the majority of valves failed by stenosis (77.7%), meaning that the odds of residual stenosis in this group was high. While there was no control group in this series, 83.5% of cases underwent BVF after ViV. Among these cases, investigators identified a significant invasive mean gradient decrease from 43.1 ± 16.4 mmHg at baseline to 19.9 ± 8.8 mmHg following ViV, and then a further decrease to 8.7 ± 5.5 mmHg after BVF.10 Survival was high among these patients (97.7% at 30 days and 91.3% at 1 year). Regarding durability of results, while there was an increase of around 5 mmHg in gradients at 30 days, there was no further change at 1 year. In Europe, investigators performed a comparison of 81 BVF patients to 79 conventional aortic ViV patients.11 Significant baseline differences included smaller valves, more stenosis, and more PPM in the BVF group. Gradient decrease was significantly higher in the BVF group compared to the control (37 mmHg to 10.8 mmHg compared to 35 mmHg to 15.8 mmHg), and this remained stable at follow-up. Both studies identified the use of self-expandable valves as a predictor of lower gradients after BVF. A recent meta-analysis summarized all the available data of 242 patients12 and confirmed a decrease in post-procedural mean gradients as well as an increase in aortic valve area.

There are multiple important procedural aspects that need to be taken into consideration for successful BVF. The two most frequently utilized non-compliant balloons are the True™ Dilatation Balloon Valvuloplasty Catheter and the Atlas™ Gold PTA Dilatation Catheter (both produced by Bard Peripheral Vascular Inc.). In the largest European experience, the True™ Dilatation balloon was used in almost 90% of cases.11 These balloons were not originally designed for BVF. The main advantage of the True™ Dilatation balloon is the wider variety of sizes (20 to 28 mm) compared with the Atlas™ Gold (14 to 26 mm). Given the need for very high pressures in BVF, one must pay attention to the rated burst pressure (RBP) (i.e., pressure at which 99% of balloons can withstand at 95% confidence13). The listed RBP per the manufacturer is 6 atmospheres for the True™ Dilatation, but bench testing has demonstrated that the balloon may sustain up to 15 atmospheres in its smaller sizes.13 The Atlas™ Gold balloon has higher RBPs per the manufacturer, but no bench data has been published so far. Operators should be mindful that the pressure to crack certain rings, such as the Magna Ease (Edwards Lifesciences), may take as much as 24 atmospheres,7 making proper balloon selection fundamental as excessive inflation may lead to balloon rupture.

In terms of balloon sizing, there are limited data to support any specific strategy. Expert opinion would advise sizing up the balloon 3 to 4 mm larger than the true ID or commonly 1 mm larger than the label size. One analysis found that balloons larger by 1 mm or less than the true ID are a significant predictor of higher gradients after BVF.14 Another analysis reached similar conclusions about the protective nature of larger balloons (3 mm or more above the true ID) when aiming for lower gradients.15

Another important question pertains to the timing of BVF. Operators may not be sure of the clinical need for BVF when performed prior to ViV as final hemodynamics will still be unknown; performing BVF could then expose patients to unnecessary risk, including acute aortic regurgitation. BVF after ViV, on the other hand, may be associated with better hemodynamic results due to more complete expansion of the THV,15 though not all studies are in agreement.10 Conversely, this approach may expose the new THV leaflets to the high pressures of ballooning, which could lead to tears16 and potentially impair durability.11 The counterpoint would be that BVF following ViV may actually increase durability by achieving complete THV expansion.17 Given this clinical equipoise, there is a clear need for further high-quality data to guide operators on the optimal timing of BVF.

While there are a number of possible complications following BVF, the incidence is quite low. A recent meta-analysis suggests rates of less than 1% for annular rupture, paravalvular leak, and pacemaker implantation, and rates of less than 1.5% for stroke and coronary obstruction.12 Ballooning of surgical valve leaflets leads to micro-emboli which can contribute to strokes.16 Operators should be mindful of excessive balloon sizing as it may lead to left ventricular outflow tract or annular rupture.11 Coronary obstruction is an especially feared complication given the very high mortality rate associated with it.18 When planning all ViV cases, but especially BVF ones, operators should take into consideration the valve-to-coronary (VTC) distance. The most commonly used cutoff for VTC is <4 mm, and in those cases BVF may increase the risk even further by approximating the stent posts and surgical leaflets to the coronary ostia. In high risk cases, operators may consider ancillary interventions, such as catheter electrosurgery for leaflet laceration (Bioprosthetic or Native Aortic Scallop Intentional Laceration to Prevent Iatrogenic Coronary Artery Obstruction, commonly known as BASILICA19) or coronary protection, in order to reduce the likelihood of a potentially fatal complication.11 Future directions of BVF and BVR include balloons specifically designed for the procedure and the more common implantation of surgical valves like the Inspiris Resilia (Edwards Lifesciences), which is specially designed to be remodeled and expanded at the time of ViV.

In conclusion, BVF is an adjunct procedure to ViV that may have a key role in improving hemodynamics. While the improvement in gradients appear durable and the rate of complications is low, it is still unknown whether this will translate into better long-term outcomes after ViV. Future studies will need to be adequately powered to evaluate clinically important outcomes such as the rate of reintervention after ViV and mortality. 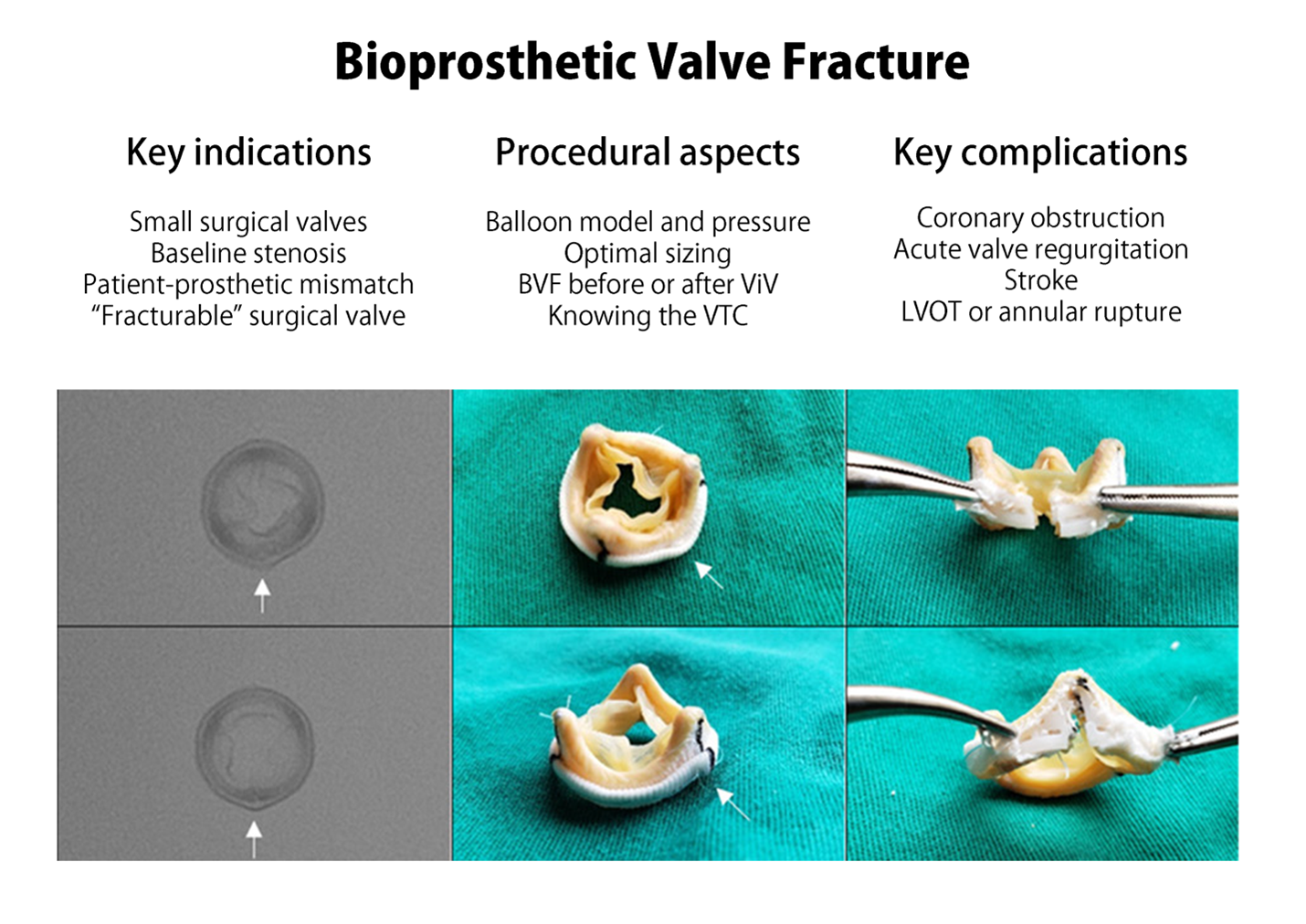 YOU ARE HERE: Home > Latest in Cardiology > Bioprosthetic Valve Fracture and Remodeling During Valve-in-Valve TAVR