In this poll, a 72-year-old woman, with a history of type 2 diabetes, hypertension, hyperlipidemia, osteoarthritis and heart failure with recovered ejection fraction presented to the hospital for a C2 laminectomy and C3-5 laminoplasty for cervical spinal stenosis. 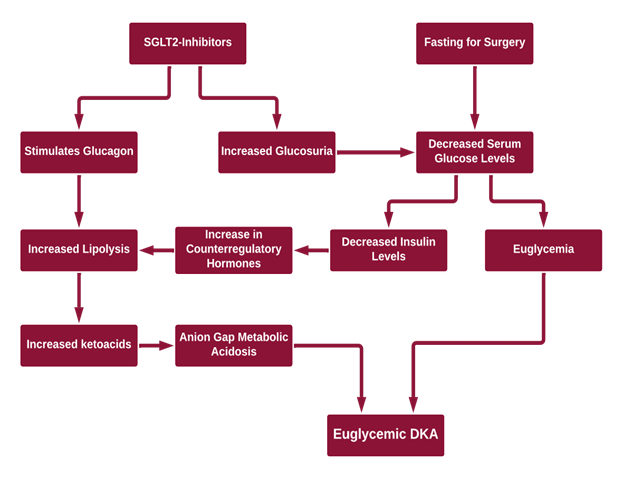 Most responding to this poll agreed that canagliflozin should have been held for 3 days preoperatively. There is an increased risk of euglycemic diabetic ketoacidosis with sodium/glucose cotransporter-2 inhibitors (SGLT2i) as well as the prolonged fasting state with surgery. In 2020, the US Food and Drug Administration released a statement indicating canagliflozin, dapagliflozin, and empagliflozin should be stopped 3 days before and ertugliflozin at least 4 days before scheduled surgery.1

Current pre-operative recommendations are to prescribe half dose of long-acting insulin the night prior to surgery to compensate for the patient's fasting state.

Metformin should not be taken the day of surgery to minimize the risk of lactic acidosis.

There is currently no evidence suggesting the need to stop carvedilol. Furthermore, this patient's blood pressure is currently ideal, without orthostatic hypotension and without symptoms of lightheadedness.

Increasing the losartan dose would (if any) provide very marginal major adverse cardiovascular event reduction but may increase the incidence of serious adverse events.

As for the patient's follow-up, surgery was completed without any intraoperative complications. Per anesthesia protocol to minimize the risk of postoperative nausea/vomiting, the patient received dexamethasone 8 mg intravenously. Postoperative, the patient was started on insulin glargine 15 units at bedtime and an aggressive lispro insulin sliding scale.

The patient developed bilious emesis that night. Her postoperative day 1 labs were notable for: sodium 136 mmol/L, potassium 4.5 mmol/L, bicarbonate 17 mmol/L, BUN 12 mg/dL, creatinine 0.48 mg/dL, glucose 68 mg/dL, and anion gap 19 mmol/L. She was able to eat breakfast with ondansetron and explained that she has had nausea and vomiting with anesthesia in the past. She also said that about ten percent of time at home, she would have hypoglycemic episodes with her glucose being <70 mg/dL.

The team decided to decrease her glargine to 10 units at bedtime given the nausea, vomiting, and hypoglycemia. However, the patient had persistent bilious emesis. Her POD2 labs were notable for: sodium 133 mmol/L, potassium 5.1 mmol/L, bicarbonate 14 mmol/L, BUN 12 mg/dL, creatinine 0.54 mg/dL, glucose 91 mg/dL, and anion gap 22 mmol/L. An abdominal radiograph was normal. The patient insisted that her nausea and vomiting coincided when she received narcotic pain medications and stated that this has occurred in the past after surgery. A lactate was checked given the elevated anion gap and it was borderline elevated at 2.0 mmol/L. The beta-hydroxybutyrate level was elevated at 6.9 mmol/L.

The primary hospitalist team was concerned about starvation ketoacidosis from nausea and vomiting versus euglycemia diabetic ketoacidosis (DKA). They consulted endocrinology who felt that given that the patient had now been off her SLGT2i for 3 days, the risk of euglycemic DKA was less likely. The patient was subsequently started on an intravenous dextrose drip to treat starvation ketoacidosis. Her repeat labs that afternoon showed sodium 134 mmol/L, potassium 5.8 mmol/L, bicarbonate 10 mmol/L, BUN 13 mg/dL, creatinine 0.47 mg/dL, glucose 115 mg/dL, and anion gap 26 mmol/L. A repeat beta-hydroxybutyrate was elevated further at 7.3 mmol/L. A venous blood gas was notable for pH 7.08 with a pCO2 39 mmHg.

Given the severe metabolic acidosis, the intensive care unit (ICU) team was consulted. The patient was transferred to the ICU and started on an intravenous dextrose infusion and a DKA protocol. The patient's anion gap improved to 18 mmol/L and she was then allowed to take in food by mouth to allow for higher insulin dosing. This resulted in closure of her anion gap and the patient was transitioned back to her home dose of insulin and discharged off her SGLT2i.