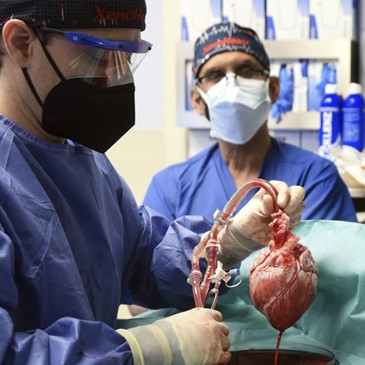 On January 7, 2022, a pig’s heart saved a man’s life. Photography courtesy of University of Maryland School of Medicine.

On January 7, 2022, David Bennett, Sr. became the first person to live with a pig's heart beating inside his chest. After languishing for months in the hospital due to end-stage heart failure, Bennett was too ill to undergo human-donor transplantation and was experiencing arrhythmias which made him a poor candidate for ventricular assist device implantation. Ultimately, he consented to the orthotopic transplantation of a pig heart with Bartley Griffith, MD, and his team at the University of Maryland Medical Center, who received emergency authorization under compassionate use criteria from the FDA.1 In a press release to CBS on January 28, 2022,2 Griffith confirmed that Bennett is recovering well and is undergoing physical therapy for the first time.

If pig hearts could be safely transplanted into patients, the critical shortage of human transplant donors would be solved. According to estimates by UNOS,3 tens of thousands of Americans per year might benefit from heart transplantation, but fewer than four thousand are performed. The reason research in xenotransplantation is now beginning to bear fruit is not due to lack of trying. For decades, scientists have struggled with graft rejection, which occurs earlier and far more intensely when the organ derives from another species. Advances in gene editing have finally begun to tackle this problem. In October 2021, a pig's kidney was transplanted in a brain-dead patient in New York for three days.4 Now, Bennett's team is "feeling progressively confident that [they] are ahead of issues with respect to heart rejection". After 50 years, January 2022 may mark a watershed moment in the emerging field.

Indeed, the first heart transplant ever performed had its roots in xenotransplantation. In 1964, at the University of Mississippi Medical Center, James Hardy, MD, transplanted a chimpanzee heart into Boyd Rush, who was in cardiogenic shock after a heart attack. The chimpanzee heartbeat in Rush's chest for approximately one hour before failing, presumably from hyperacute rejection. This reaction is caused by preformed antibodies to galactose-α1,3-galactose (alpha-Gal),5 which are widely expressed in pig endothelium, and is analogous to the reaction that occurs after transfusion of ABO incompatible blood. Initial efforts to overcome this were directed at depleting recipients of anti-Gal antibodies by plasmapheresis or infusions of binding molecules. Inevitably, the antibodies would return causing the graft to fail within days to weeks.

However, the pig used for Bennett's transplant did not express alpha-Gal. Using CRISPR, its genome was edited in several ways. Genes encoding porcine antigens recognized by the human immune system, including alpha-Gal, were deleted. Human genes were added that express immune inhibiting proteins, as well as an antithrombotic protein which inhibits the aggregation of platelets and fibrin, another major mechanism of graft rejection. A gene encoding a growth factor was also removed to prevent enlargement of the heart after transplantation, which has been observed in animal trials. A total of ten modifications were made by the Virginia-based regenerative medicine firm, Revivicor, who supplied the donor animal used here.

Compared to allotransplantation, greater immunosuppression is required to prevent acute cellular rejection even after gene editing. New agents blocking the T-cell costimuluation pathway may be more effective and are being used in Bennett's case.6 It is also possible that endogenous porcine retroviruses may infect the transplant recipient7 (exogenous microorganisms will be absent as the donor pigs are bred in a sterile environment). It is unclear if these viruses will be pathogenic in humans. Finally, the regulatory framework that will encompass this therapeutic "tool" will be complex. CRISPR-modified pigs will occupy a heretofore unknown and potentially unsettling area between an animal, a GMO, and a medical device. Attention must be paid toward ethical management of this resource as well as public perception of its use.

Nevertheless, the potential benefits of clinical cardiac xenotransplantation cannot be understated. Limitations on repeat transplantation will be considerably lower, and patients will no longer wither in an ICU with a garden hose stuck in their leg for weeks. The ethical dilemmas surrounding candidacy faced regularly at transplant meetings will be drastically mitigated. In theory, pigs could also be bred to provide any organ, though the heart is particularly convenient as it is generally less prone to rejection and its function is largely mechanical. If Bennett's transplant proves durable, it is likely that clinical trials of heart xenotransplantation will begin in the next few years. These are only first steps toward the goal of providing a porcine graft as potential destination therapy for patients with end-stage heart failure. But for the first time in history, a human has survived for nearly a month with pig's heart, and a field over 50 years in the making has finally begun to bloom.

This article was authored by Steven (Shiyang) Zhang, MD, a fellow at Washington University in St. Louis. Twitter: @notquiteSteven.