Left Atrial Appendage Exclusion Devices – Where Are They Going?

Cardioembolic stroke is the most severe consequence of atrial fibrillation (AF) and is increased 4-5 fold in patients with AF. The annual risk of cardioembolic stroke increases sharply with age, as does the risk of severe bleeding complicating oral anticoagulation (OAC) therapy.1

The inherent challenges and consequences with the use of OAC therapy for stroke prevention in AF has led to the development of alternative methods for stroke prevention such as left atrial appendage (LAA) closure. Surgical closure of the LAA was first proposed in the 1940’s, based on an observation that the LAA was a potential site of thrombus. A more recent analysis found that in 91% of patients with non-rheumatic AF and 57% with rheumatic AF, left atrial thrombi were isolated to or originated from the LAA.2 As a prophylactic measure during mitral valve procedures, suture ligation from the endocardial surface of the left atrium is often performed as recommended in the AHA/ACC guidelines for the management of patients with valvular heart disease.3 Percutaneous LAA implant devices were initially developed as alternatives to surgical closure of the LAA. The demonstration of non-inferiority in the PROTECT AF trial of the LAA implant compared to warfarin provided the proof of concept that exclusion of the LAA is beneficial in preventing cardioembolic events and bleeding consequences related to OAC therapy.4 This has led to the development of both endocardial and epicardial approaches for the exclusion of the LAA. Endocardial implants are perceived as being easier to use, while epicardial approaches do not leave a foreign body in the LAA. Which device or approach for exclusion of the LAA is dependent upon morphology and size of the LAA, but ultimately will be based on efficacy of LAA closure and complication rates. 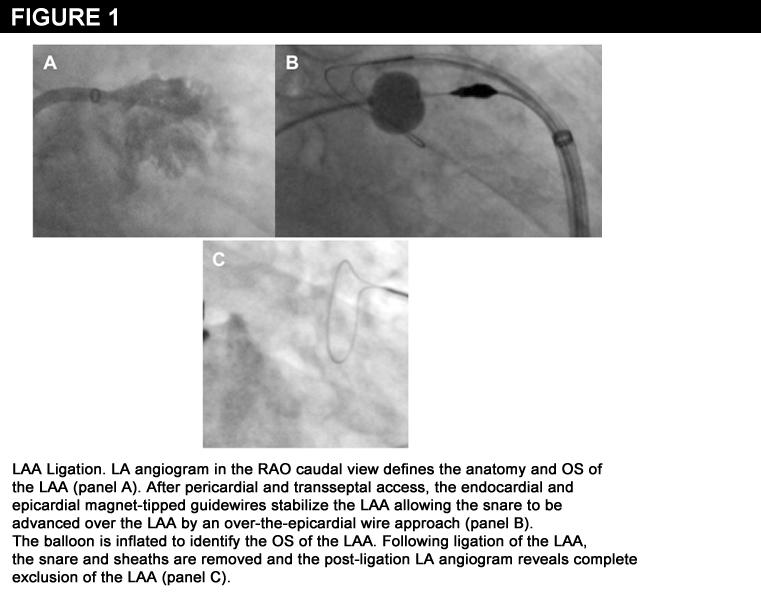 The LAA implant device used in the PROTECT AF trial has become the prototype for LAA implants due to the vast clinical experience and trial data. Recently, a catheter-based LAA ligation procedure has been developed using an epicardial approach.5 Pericardial and transseptal access is used to connect an endocardial magnet-tipped guidewire to an epicardial magnet-tipped guidewire to stabilize the LAA (Figure 1). The suture delivery device consists of a snare with a pre-tied suture that is advanced over the LAA by an over-the-epicardial wire approach. Once the suture delivery device is positioned over the LAA, the snare is closed, suture released, knot tightened, remnant suture cut and the suture delivery device is removed resulting in complete closure of the LAA without a foreign body. LAA ligation with the suture delivery device has been shown to produce a LAA complete closure rate of 96%, no device complications and an acceptably low access related complication rate.5

With the development of effective LAA closure devices, is there a rationale for LAA exclusion during AF ablation? The HRS/EHRA/ECAS Expert Consensus Statement on Catheter and Surgical Ablation of Atrial Fibrillation states that decisions regarding the use of warfarin more than two months following ablation should be based on the patient’s risk factors for stroke and not on the presence or type of AF.6 Discontinuation of warfarin therapy post ablation is generally not recommended in patients who have a CHADS score > 2. Therefore, the concomitant exclusion of the LAA during or following pulmonary vein isolation (PVI) for the treatment of AF would provide a strategy of performing AF ablation for the treatment of symptoms related to AF and exclusion of the LAA for the prevention of thrombus formation in the LAA, thus providing an alternative to long-term OAC therapy post-PVI. With the results of the Protect AF study demonstrating non-inferiority to warfarin therapy, one could consider PVI with implantation of an LAA implant device. After two months of warfarin therapy post-PVI and LAA device implantation, discontinuation of warfarin could be considered.

An appealing use of LAA ligation with the suture delivery device is the potential to perform a closed chested MAZE procedure. A pilot study at the University of California, San Francisco has demonstrated feasibility of concomitant LAA ligation and PVI. Additional studies are needed to determine whether LAA ligation may also improve AF ablation outcomes.

YOU ARE HERE: Home > Latest in Cardiology > Left Atrial Appendage Exclusion Devices – Where Are They Going?