Sudden death in young competitive athletes is a highly visible event with enormous impact on physicians and families.1-4 A number of different clinically identifiable cardiovascular diseases are often responsible for these tragic events, raising the need for increased recognition and diagnosis. In the United States, hypertrophic cardiomyopathy (HCM) remains the most common cause of sudden death in athletes, followed by anomalous origin of the coronary arteries with numerous other structural heart diseases, valvular disease and ion channelopathies comprising the remaining causes.1,2 The mechanism of sudden death appears to be related to intense competitive sports promoting ventricular tachycardia (VT)/ventricular fibrillation (VF) in the presence of underlying abnormal myocardial substrate. For these reasons, reliable identification of athletes with heart disease is of critical importance, since disqualification from competitive sports may decrease risk of a life-threatening event.4

Recently, cardiovascular magnetic resonance (CMR) has emerged as an important imaging technique, particularly well-suited to provide detailed characterization of the heart and an important aid for diagnosis of underlying heart disease in athletes.5 CMR provides 3-dimensional tomographic imaging with high spatial and temporal resolution, with the ability to image the heart in any plane and without ionizing radiation. Contemporary functional cine CMR imaging sequences (i.e., steady-state free precession) allow clear delineation of the endocardial and epicardial borders by producing sharp contrast between the interface of darkened myocardium and bright blood pool, permitting precise wall thickness measurements in any location of the left ventricular (LV) myocardium. Furthermore, CMR provides truly tomographic imaging by acquiring a stack of short-axis images (with no interslice gap), with full ventricular coverage and therefore the opportunity to inspect the entire LV myocardium for abnormalities, including focal hypertrophy or regional wall motion abnormalities.5 CMR images are not encumbered by the same limitations inherent in echocardiographic imaging, such as poor image quality related to thoracic or pulmonary parenchyma or inaccurate wall thickness measurements due to short-axis obliquity.6 Lastly, myocardial fibrosis can be identified with contrast-enhanced CMR sequences after the intravenous injection of gadolinium images, which identify select patients at increased risk of adverse disease consequences.7,12

Among trained athletes in whom left ventricular wall thickness falls into a ''grey zone'' of overlap of physiologic non-pathologic LV hypertrophy associated with systemic training, with that of HCM with mild phenotypic expression, a number of variables should be taken into consideration in order to differentiate between these two entities (Figure 1).3,4,8,9 Within this strategy, CMR now plays an increasingly important role in the diagnosis of HCM versus athletes heart for several reasons.10 First, when echocardiographic images are technically suboptimal and nondiagnostic, CMR has the distinct advantage of defining LV wall thickness measurements with high-resolution imaging. CMR has also proved advantageous in identifying the presence of LV hypertrophy not seen on echocardiography, particularly when regions of increased wall thickness are completely (or predominantly) limited to focal areas of the LV wall such as the anterior free wall, posterior septum and apex.11 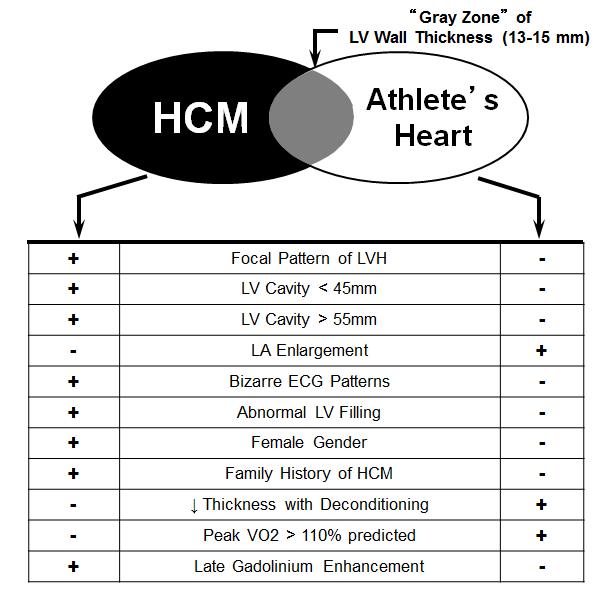 Forced detraining of the athlete may also serve as another useful strategy to resolve differential diagnosis between athlete's heart and HCM.8 Patients who decondition over a short three month period, and in whom wall thickness regresses greater than 2 mm, supports a diagnosis of athletes heart while hypertrophy that remains unchanged suggests HCM (Figure 2). Due to its high spatial resolution and ability to make reliable wall thickness measurements, CMR is well-suited to accurately compare maximal LV wall thickness measurements before and after a period of systematic deconditioning.9

Figure 2. Role of CMR in evaluation of athletes with borderline increased LV wall thickness measurements. A symptomatic 19-year-old basketball player was identified on a pre-participation history and physical examination to have an abnormal 12-lead electrocardiogram. During the initial cardiovascular evaluation, CMR (A) demonstrated a focal, localized area of increased LV wall thickness (maximal 14 mm) in posterior septum (asterisk). After a 3-month period of deconditioning from competitive sports and training a repeat CMR (B) showed no change in the posterior septal maximal wall thickness. In addition, on contrast-enhanced CMR images (C) a focal area of LGE was present in the same location as the mild LV wall thickening. The presence of LGE and a focal area of LV hypertophy unchanged in thickness following athletic deconditioning support a diagnosis of HCM. Modified from Pelliccia A, Maron MS, Maron BJ. Assessment of left ventricular hypertrophy in a trained athlete: differential diagnosis of physiologic athlete's heart from pathologic hypertrophy. Prog Cardiovasc Dis 2012;54:387-96.

Results from contrast-enhanced CMR with late gadolinium enhancement (LGE) can also aid in the differentiation of HCM from athletes heart. LGE is present in about half of individuals with hypertrophic cardiomyopathy.12 In contrast, LV remodeling associated with the athlete heart should not result in focal areas of myocardial scarring/fibrosis, especially in younger individuals. Multiple small CMR-based studies have demonstrated the absence of LGE in young competitive athletes, despite the presence of elevations in cardiac biomarkers following prolonged exertion, an observation which has raised concern that competitive sports and vigorous exercise training may result in adverse LV remodeling due to myocardial injury.13 Therefore, in an athlete in whom suspicion has been raised for HCM, the presence of LGE on contrast-enhanced CMR favors a diagnosis of HCM (Figure 2).6,9 However, the absence of LGE cannot be used to reliably exclude the possibility of HCM, as this is found in half of patients with a clinical diagnosis of HCM.

A novel and promising CMR technique, T1 mapping provides assessment of the total extent of expanded extracellular space, rather than the detection of regional areas of myocardial fibrosis identified by traditional LGE imaging.14 Therefore, T1 mapping may emerge as a reliable diagnostic imaging marker in differentiating pathologic cardiovascular diseases such as HCM from that of physiologic remodeling in athletes heart. However, further investigations applying T1 mapping to these specific patient populations is necessary to better to define the role of this technique.

Arrythmogenic Right Ventricular Cardiomyopathy (ARVC). CMR is also capable of providing detailed characterization of the right ventricle (RV) to aid in the diagnosis of ARVC, a genetic heart disease associated with fibrous/fatty replacement of the RV free wall.15 This is particular relevant since morphologic changes to the RV, including RV dilation, can be observed as part of the benign remodeling observed with systemic training in athletes.3,4,16 Therefore, differentiating between these changes to the RV as part of athlete's heart and pathology due to ARVC is crucial. One of the major criteria for diagnosis of ARVC is predicated on the identification of morphologic abnormalities of RV free wall motion and cavity size/function.15 High-spatial resolution imaging with CMR can provide accurate quantification of chamber volumes and function while reliably identifying focal wall motion abnormalities of the RV, a finding supportive of a diagnosis of ARVC (Figure 3).16 In this regard, CMR can be particularly advantageous given the limitations inherent in assessing the RV on two-dimensional echocardiogram, due to its unique shape and position in the chest wall. Of note, RV cavity enlargement in athletes almost always occurs in presence of LV enlargement, and thereby if isolated RV enlargement is present, suspicion should be raised for underlying disease.16 In addition, tissue characterization to identify fatty infiltration of the RV is possible with CMR, and while the identification of fat by imaging is currently not one of the major or minor criteria for diagnosis, the presence of this finding on CMR can aid in the determination of diagnosis. Finally, LGE of the RV free wall can be seen as part of the spectrum of ARVC, a finding not associated with athlete's heart.15 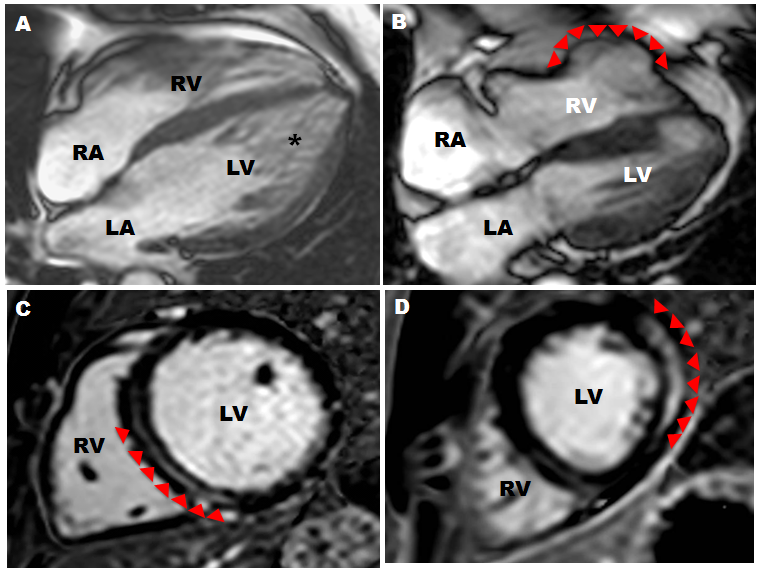 LV noncompaction (LVNC). LVNC is characterized by increased trabeculations throughout the LV chamber with a thin subepicardial compact layer and a non-compact thicker hypertrabeculated layer. Due to its super spatial resolution in imaging the distal LV myocardium, CMR is generally superior to echocardiography for identification of hypertrabeculated myocardium and allows for more definitive diagnosis (Figure 3).17 In addition, CMR may alter diagnosis of some patients initially diagnosed with apical HCM. In this regard, the LV trabeculations associated with LV noncompaction may appear as apical hypertrophy when imaged with lower spatial resolution two-dimensional echocardiography, potentially resulting in a misdiagnosis of apical HCM in these patients.6

Anomalous Origin of Coronary Arteries. In athletes who present with unexplained chest pain or syncope, anomalous origin of the coronary arteries from the wrong sinus of valsalva should be considered.18 An anomalous course of either the right or left coronary from the opposite sinus with a course between the great vessels is associated with potentially increased risk during intense physical activity. The majority of patients with this congenital abnormality of the coronaries have a normal 12-lead electrocardiogram, suggesting that a high index of suspicion is often needed to prompt testing for diagnosis. In this regard, CMR can play an important role in depicting proximal coronary artery anomalies using coronary magnetic resonance angiography (MRA), with high specificity and sensitivity for identification of anamolous origins of the coronary artery, without exposing patients to ionizing radiation of cardiac catheterization or computed tomography angiography.19

Myocarditis. CMR can raise suspicion of myocarditis in an athlete through identification of a number of abnormalities including: 1) quantification of decreased systolic function, with or without regional wall motion abnormalities; 2) patchy, often diffuse areas of LGE localized to the midmyocardial or epicardial layer and in a noncoronary artery distribution (Figure 3); 3) in the acute phase of disease, areas of increased signal intensity on T2 weighted images representing edema.21

The evaluation of heart disease in competitive athletes can often be complex and challenging, with diagnosis often impacting numerous important management decisions, including potential restriction from continued participation in organized sports. CMR has now emerged as a powerful complimentary imaging technique unique suited for the evaluation of the diverse disease spectrum associated with structural heart diseases in athletes. CMR can provide relevant diagnostic information which may not be obtainable with traditional echocardiographic imaging, including precise assessment of LV and RV morphology as well as tissue characterization with LGE. Indeed, CMR should now be regarded as part of the contemporary assessment of nearly all athletes in whom suspicion of structural heart disease is raised.

YOU ARE HERE: Home > Latest in Cardiology > Cardiovascular Magnetic Resonance Imaging in the Assessment of Athletes with Heart Disease