Who Needs an IVC Filter?

Venous thromboembolism (VTE) is estimated to account for 60,000-100,000 deaths per year in the United States, most often due to pulmonary embolism.1 The mainstay of therapy is anticoagulation, which comes at the cost of increased risk of bleeding that cannot be tolerated in some patients. Use of a physical barrier to prevent thrombus migration was first proposed in 1865 by Armand Trousseau.2 In the 1930s, the connection between deep vein thrombosis (DVT) and pulmonary embolism (PE) was reported by John Homans and femoral vein ligation was suggested as treatment and prevention of fatal VTE events.3 Marion "Bill" de Weese is credited with the first partial luminal interruption of the inferior vena cava (IVC) to prevent PE by creating a harp-grid network out of interrupted silk sutures that could catch emboli.4 In the 1960s and 1970s, filters that could be introduced via short venotomy were popularized and followed by percutaneous filters – their use has expanded over the decades despite very real complications and harms for patients.5 The FDA released a warning in response to a reported high fracture rate with the Bard Recover inferior vena cava filter (IVCF) in 2010.6 This resulted in a reduction in IVCF use, and widespread public awareness of risks associated with IVCF. However, higher than expected implantation rates persist.7 The purpose of this analysis is to evaluate who may benefit from IVCF implantation, considering the risks of filter complications and the lack of alternative treatment options for VTE patients with contraindications for anticoagulation.

Providers today operate under a number of limitations with respect to the data and guidelines surrounding use of IVCF. There are only two prospective randomized control trials investigating permanent and retrievable IVCF, respectively, in patients with acute thromboembolism: the Prevention due Risque d'Embolique Pulmonaire par Interruption Cave (PREPIC) Study and PREPIC2 Study.8,9 The remaining body of evidence is a mix of observational data and cohort studies. Additionally, the various societal guideline statements on the use of IVCF is conflicting (Table 1). The only universally accepted indication for IVCF placement remains patients with an acute thromboembolism and an absolute contraindication to anticoagulation.10-16

Table 1: Guideline Recommendations Regarding the Use of Inferior Vena Cava Filters

The PREPIC studies evaluated the role of IVCF in patients receiving systemic anticoagulation. The first PREPIC study enrolled 400 patients with proximal DVT, with and without symptoms of PE, who were randomized to permanent IVCF with anticoagulation versus anticoagulation alone for at least 3 months.8 The follow up at 2 years and 8 years was identical: a lower rate of symptomatic PE was noted in the IVCF group (6.2% vs 15.1%, p = 0.008), which was offset by a higher rate of symptomatic DVT with IVCF placement (35.7% vs 27.5%, p = 0.042). There was no difference in mortality between the groups. PREPIC 2 evaluated the performance of retrievable IVCF (ALN, ALN Implants Chirurgicaux) as a randomized open-label, blinded endpoint trial that enrolled patients with acute, symptomatic PE and associated lower limb DVT with at least one criterion for severity (Table 2).9

Table 2: Inclusion and Exclusion Criteria for the PREPIC 2 Study9

At 6 months follow-up, there was no significant difference in recurrent fatal PE between the filter and non-filter groups (3% vs 1.5%; RR with filter, 2.00; 95%CI 0.51 – 7.89; p = 0.5); all events occurred prior to IVCF retrieval at 3 months follow-up. Filter thrombosis occurred in 3 patients; there was no other difference in outcomes between groups. Notably, three-fourths of the population did not have identifiable, reversible risk factors (i.e. unprovoked VTE) and two-thirds had at least one sign of right ventricular dysfunction based on imaging or biomarkers. According to current definitions, the population therefore represented patients with low to intermediate risk PE.13 In this setting, these studies support that IVCF do not provide additional protection in patients receiving anticoagulation.

Use of IVCF in patients with significant bleeding risk is perhaps the only indication that does not generate significant controversy among providers, however data to support IVCF use in this setting is sparse. Prospective cohort data from RIETE (Computerized Registry of Patients With Venous Thromboembolism) reported that placement of IVCF compared to anticoagulation alone was associated with a lower risk of PE-related death (1.7% vs 4.9%, p = 0.12) and higher risk of VTE at 30 days (6.1% vs 0.6%, p < 0.001) in propensity score-matched patients presenting with VTE and a high bleeding risk as determined by the local investigator.17 Design limitations prevent any conclusions on a causal effect of this outcome, however in the absence of alternatives it seems reasonable to offer IVCF to patients with a high bleeding risk. Failure of anticoagulation is often raised as a potential indication for placement of IVCF, however, many cases of recurrent VTE do not represent anticoagulation failure but rather inadequate anticoagulation (e.g. sub-therapeutic dosing, patient-related factors leading to increased thrombosis).18-20 Thus, these cases should prompt the provider to first consider adherence to medication, underlying malignancy or thrombophilia (e.g. antiphospholipid antibody syndrome, heparin-induced thrombocytopenia) and if there truly is a recurrent VTE (See Figure 1). In the event that new VTE is confirmed, therapy should be adjusted prior to consideration of IVCF placement.11

Figure 1: Algorithm for Management of Patients with Suspected Anticoagulation Failure

The data for IVCF is less robust in patients with poor cardio-pulmonary reserve, including intermediate-high and high-risk PE. Stein et al performed a retrospective analysis of over 2 million patients from the United States Nationwide Inpatient Sample to determine in-hospital all-cause case fatality rate according to the use of IVCF in across categories of PE patients (e.g. stable, unstable, and those who received lytic therapy).21 The greatest benefit was observed in the unstable patient that did not receive lytic therapy, which demonstrated a 35% reduction in-hospital case fatality rate in patients that received IVCF (p<0.001; NNT = 5, 95% CI: 5-6). This is in line with other studies like the International Cooperative Pulmonary Embolism Registry (ICOPER), which also demonstrated a protective effect of IVCF in patients with massive PE.22 In patients undergoing surgical embolectomy for acute PE, there is a high rate of post-operative PE, which may be fatal in the context of underlying RV failure. Case series have shown a protective effect of IVC filters in this setting, prompting many centers to routinely place IVCF pre- or peri-operatively in patients undergoing pulmonary embolectomy.10,23,24 Similar practice was historically observed in patients with chronic thromboembolic pulmonary hypertension (CTEPH), however, a recent prospective registry data showed that presence of an IVCF in 40% of patients undergoing pulmonary endarterectomy did not influence long-term survival, leading practitioners to abandon routine placement for peri-operative protection.25

It is likely that some higher risk patients with VTE benefit from the added protection of IVCF in the setting of a vulnerable RV, however, this decision should be made on a case-by-case basis. Involvement of a multidisciplinary discussion through a VTE team such as PERT (Pulmonary Embolism Response Team) may help facilitate these decisions. Emerging data has shown decreased mortality rate in higher risk PE patients with utilization of PERT, as well as lower IVCF implantation rates.26 The absence of stronger data precludes routine use of IVCF for all patients with poor cardiopulmonary reserve, especially if they are able to receive other therapies, including thrombolysis and anticoagulation. Recent observational data from the National Inpatient Sample database revealed no mortality benefit to IVCF placement in patients with proximal DVT undergoing catheter-directed thrombolysis, but higher hospital charges and longer hospital stay.27

Patients with major trauma are at high risk for VTE especially in absence of thromboprophylaxis with unfractionated heparin or low molecular weight heparin (LMWH).28 The rationale for retrievable IVCF use in this setting to offer protection during a high-risk period for bleeding and VTE in trauma patients that may not be able to receive anticoagulation. However, data from one Level I trauma center suggests that IVCF placement for this indication most often occurs after the contraindication to anticoagulation has passed and most patients could receive appropriate pharmacologic thromboprophylaxis.29 Additionally, a recent multicenter, randomized controlled trial of 240 patients with severe injury and a contraindication to anticoagulation did not demonstrate a lower incidence of pulmonary embolism of death with early IVCF placement as compared to no IVCF.30 Roughly two-thirds of the patients in this trial were started on anticoagulation within 7 days after severe injuries. Symptomatic pulmonary embolism was not identified in any of the patients with IVCF in the remaining one-third of patients with on-going contraindication to anticoagulation but was identified in five patients from the control group (14.7%). Guidelines are directly conflicting with regard to the use of prophylactic IVCF, however it is worth noting that the recommendation by the Eastern Association for the Surgery of Trauma (EAST) in favor of IVCF use has not been updated since 2002.31

The goals of IVCF use across the various scenarios explored above include prevention of thromboembolism in patients that cannot be adequately treated with anticoagulation and to provide a literal safety net for clinically perceived high-risk patients. The use of these devices has proliferated with transition from permanent to retrievable IVCF, however actual retrieval rates remain very sub-optimal even after initiation of anticoagulation.32 The majority of complications (Figure 2), including thrombosis, post-thrombotic syndrome, migration, embolization or penetration of struts/device, and filter fracture occur out of the acute implantation period and are directly related to IVCF dwell times.32,33 New investigations into bioconvertible IVCF, which convert from a filtering to non-filtering configuration after 60 days, as an alternative to overcome these complications are promising.34 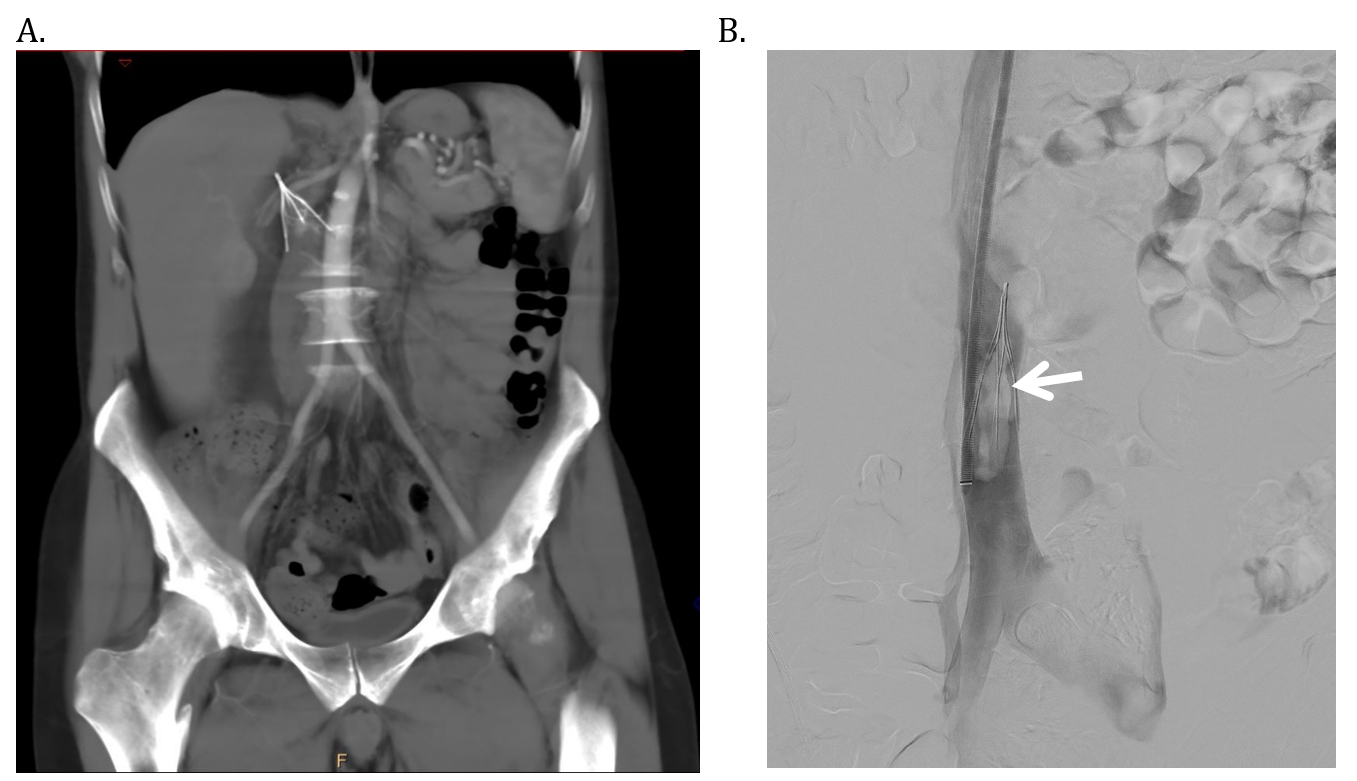 The available data today supports circumspect use of IVCF in patients that cannot receive systemic anticoagulation, and on a case-by-case basis for patients with poor cardiopulmonary reserve particularly if they cannot receive more advanced rescue therapies like thrombolysis or if they are undergoing embolectomy for acute PE. When considering IVCF implantation, the risks and benefits should be weighed for each individual case, with recognition that the best way to avoid IVCF complication is to avoid implantation unless deemed truly necessary.

YOU ARE HERE: Home > Latest in Cardiology > Who Needs an IVC Filter?