Pericardial decompression syndrome (PDS) is defined as a paradoxical worsening of hemodynamics and development of pulmonary edema after an uncomplicated pericardial drainage in patients with pericardial effusions (often large) or those with cardiac tamponade physiology.1 PDS is also known as post-pericardial drainage low cardiac output syndrome.1-3

Although the precise pathophysiology of PDS is still not well understood, this seems to have a strong association with some underlying ventricular dysfunction. There are three plausible mechanisms of PDS. The first plausible hypothesis is paradoxical hemodynamic derangement [Figure 1]. 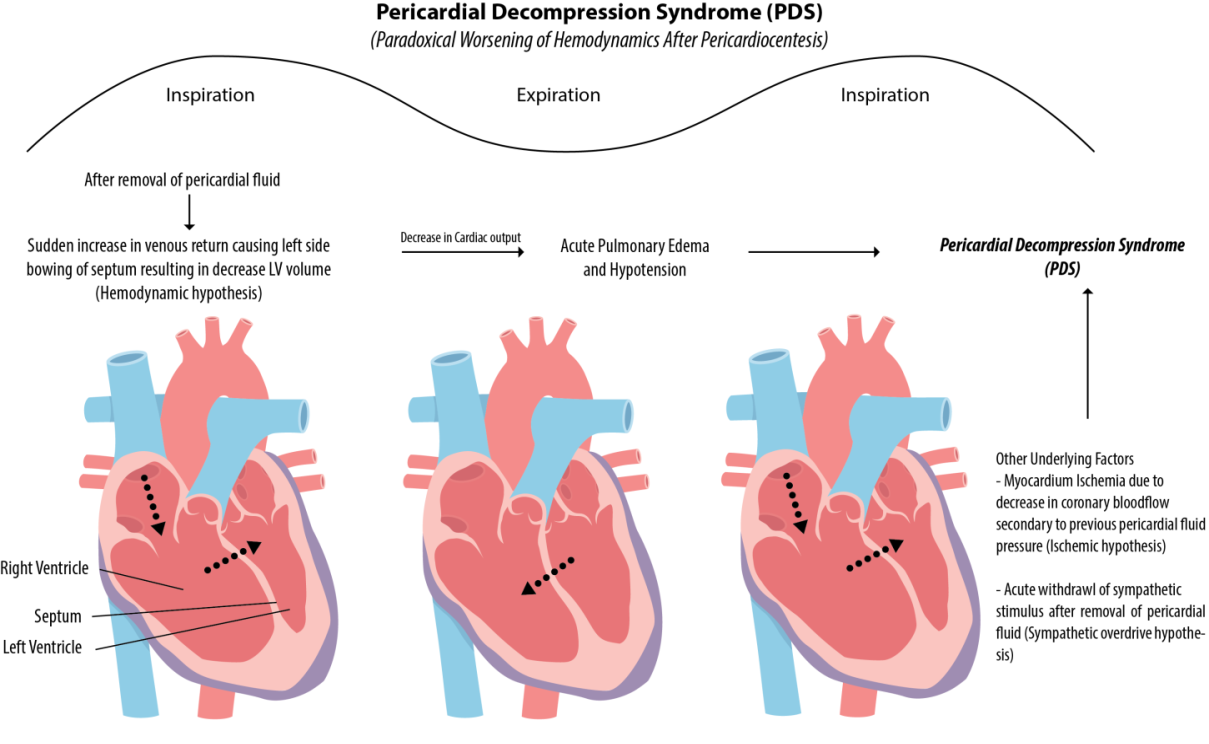 The rapid removal of the pericardial fluid originally compressing the right-sided chambers during tamponade results in an increased venous return which leads to significant right ventricular expansion at the expense of the left ventricle resulting in a reduced effective cardiac output and causes decompensated left heart failure and pulmonary edema.1,4,5 The rapid tamponade release is also followed by a net increase in the pulmonary venous return while adaptive systemic vascular resistance may be still high (usually a compensatory phenomenon in tamponade to counteract hypotension). This can cause a preload/afterload mismatch and precipitate acute onset heart failure. The second plausible hypothesis is, 'ischemia caused by coronary compression'. It is postulated that an increased intrapericardial pressure during tamponade physiology can impair coronary artery perfusion leading to myocardial ischemia and left ventricular myocardial stunning. Myocardial stunning may transiently persist even after the pericardial drainage and can result in diastolic dysfunction thereby increasing the risk of PDS.1,6 The third mechanism is related to an imbalance in the autonomic system.7-9 Autonomic imbalance may develop due to an acute withdrawal of sympathetic stimulus after pericardiocentesis, which may also precipitate myocardial dysfunction [Figure 2].

The actual incidence of PDS is not well known but is best estimated to be around 5%, although some smaller case series have reported variably higher occurrence rates.1-3 Clinical variables such as history of malignancy, low ejection fraction, prior radiotherapy use, pericardial calcification, and connective tissue disorders are associated with an increased risk of PDS.1

The symptoms of PDS are very similar to those of acute heart failure exacerbation, such as development of dyspnea, leg swelling, and increasing oxygen requirements, which usually lead to a rapid clinical deterioration including pulmonary edema and/or shock state. These symptoms usually succeed a brief initial improvement in hemodynamics.1 To conclude the diagnosis of PDS, one should also entertain and first exclude other differential diagnoses such as septic shock, cardiogenic shock resulting from causes such as myocardial infarction (MI) or intraprocedural mechanical trauma (resulting in cardiac puncture), and also exclude a concomitant type A aortic dissection.15

The treatment of PDS is essentially supportive in nature and most survivors usually develop a spontaneous improvement in ventricular function.1,3 Patients should be closely monitored in an intensive care unit for at least first 24 hours. Patients may require advanced intensive support measures including inotropic support, aggressive heart failure therapy with vasopressors and diuretics, and sometimes hemodynamic device support such as the use of an intra-aortic balloon pump or an impella device. Although there are no clear evidence-based guidelines that specifically address prevention of PDS, a commonly recommended expert clinical approach is to not drain large quantities of pericardial fluid in a single procedure, especially in those with large malignant pericardial effusions and those which demonstrate an impressive chamber collapse.16,17 The most reasonable approach would be to remove the amount of pericardial fluid just enough to result in the resolution of the cardiac tamponade physiology (which can be easily achieved by hemodynamic or echocardiographic monitoring) and then place a prolonged pericardial drain in order to achieve a slow removal of additional pericardial fluid. The drainage catheter can be then removed when there is a daily fluid return less than 30-50 ml.1,3 European Society of Cardiology 2004 guidelines generally recommend drainage of pericardial fluid in steps of less than 1 liter at a time to potentially avoid PDS.18 Although judicious pericardial drainage may be potentially protective against PDS, PDS may rarely develop even after a small pericardial drainage with volume as little as 450 ml. Many experts recommend halting the initial drainage following an improvement of symptoms and hemodynamics and then followed by a slow gradual decompression through an indwelling pericardial catheter.3 The slow gradual drainage is potentially protective against PDS by providing a reasonable time for myocardial adaptation to the hemodynamic and filling pressure changes.1 Since most reports of PDS in literature are related to usually large malignant effusions, it would be reasonable to subject patients with malignant effusions undergoing pericardial drainage to a more closer monitoring for the possible development of PDS.2 A few authors have also argued about the technique of pericardial drainage. Based on the results of a case series of cases with PDS, PDS is associated with a higher mortality with pericardiotomy compared to pericardiocentesis.2 One likely explanation for this observation could potentially be that the surgical drainage may lead to a more rapid expansion of the right ventricle ensuing PDS due to a rapid pericardial decompression, although it may also be due to a notable selection bias of the data obtained from published case reports.3

PDS may be associated with a high mortality rate without an early recognition and prompt supportive care. Larger studies are however needed in the future to better understand the pathophysiology and prevention strategies of PDS. A multicenter registry database would also be helpful to compare different drainage techniques and treatment choices.

YOU ARE HERE: Home > Latest in Cardiology > Pericardial Decompression Syndrome