Physical activity (PA) has an inverse association with heart failure (HF) risk. It is not known, however, whether regular PA is equally protective against HF in the general population and among persons with high-risk conditions such as obesity, diabetes mellitus, hypertension, metabolic syndrome, and pre-existing atherosclerotic cardiovascular disease (ASCVD).

In the present study, the authors utilized data from the ongoing ARIC (Atherosclerosis Risk in Communities) cohort, including nearly 14,000 participants with and without various risk factors for HF to assess the association of regular PA with HF incidence.1,2 Compared to poor PA, recommended levels of PA were associated with lower HF risk in the overall study population, as well as in persons with obesity, diabetes mellitus, hypertension, and metabolic syndrome; however, this association was not seen in persons with established ASCVD. Thus, while regular PA should be recommended broadly due to numerous benefits in persons with ASCVD, it may be less effective in preventing HF in this population.

The prevalence of HF has risen due to improvements in survival of persons with coronary heart disease (CHD) in addition to the overall aging of the population. The American Heart Association (AHA) estimates about 1,000,000 new cases of HF occur each year, with 6.5 million Americans currently affected. About half of HF patients will die from the condition within 5 years of their diagnosis.

A staging system for HF has been instituted to help refine subgroups and therapeutic approaches, which ranges from stage A (asymptomatic but at high risk for HF) to stage D (end-stage HF). Stage A HF includes persons with hypertension, obesity, diabetes mellitus, metabolic syndrome, and ASCVD.

Each of these conditions alone are risk factors for HF and current guidelines recommend following a heart-healthy lifestyle, which includes engaging in recommended levels of physical activity (PA) (≥75 min/week of vigorous or ≥150 min/week of moderate and/or vigorous physical activity), as part of strategies to prevent HF. However, previous studies have been unclear as to if the same preventive strategies will be effective across the various at-risk subgroups.

Previous observational studies have shown a dose-dependent inverse association between PA and HF incidence, in addition to improvements in various cardiometabolic conditions like obesity, diabetes mellitus, and metabolic syndrome. Regular PA protects against the development of ASCVD and increases survival after the incidence of ischemic events. However, regular PA may be less effective at preventing HF as a result of myocyte death and replacement fibrosis, which are consequences of ischemic events.

The ARIC (Atherosclerosis Risk in Communities) study is an ongoing prospective, observational, predominantly bi-racial, cohort study, consisting of adults from four communities in the US. The study began between 1987-1989, with 15,792 participants from 45 to 64 years of age who were followed prospectively with serial study visits. For the purpose of this study, participants were categorized based on the presence of the various HF risk conditions described previously, with the primary exposure variable being exercise PA assessed at each of the study visits.

PA was measured utilizing an interviewer-administered Baecke questionnaire in which participants answered questions about participation in various sports or exercise activities as well as frequency of participation. Each activity was assigned a metabolic equivalent of task (MET) in order to quantify the intensity of activity. 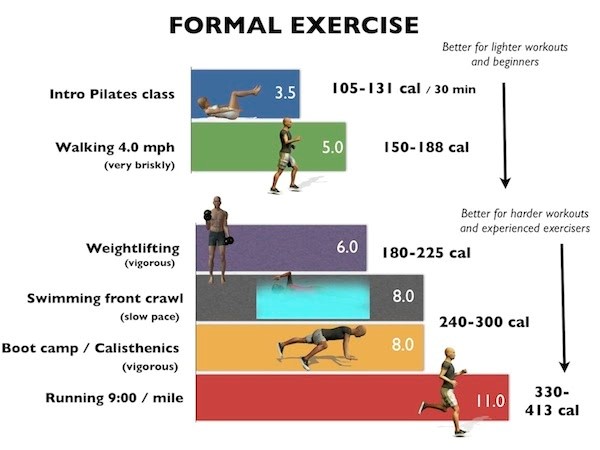 The primary outcome for this study was incidence of HF defined by either a HF-related hospitalization or death after baseline visit up until December 31, 2016. Various in-depth statistical analyses were performed in order to assess the association between PA and HF, with stratification for the various high-risk subgroups, along with proper statistical controls, and with tests for interaction.

In the overall study population of 13,810 ARIC participants, 37% reported poor, 25% intermediate, and 39% recommended levels of PA at baseline visit. The mean age was 55 years, 54% were women, and 26% were black. Additionally, half of the group had hypertension, 27% obesity, 11% diabetes mellitus, 23% metabolic syndrome, and 9% prevalent ASCVD.

Over a median of 26 years of follow-up, there were nearly 3,000 HF events. Each high-risk condition was strongly associated with HF risk. Persons with hypertension and obesity had 2.0x, those with diabetes had 3.1x, those with metabolic syndrome had 2.1x, and those with ASCVD had 2.5x higher risk of HF.

As demonstrated in Figure 2 below, higher PA was associated with lower rates of incident HF in the overall study population and in most high-risk subgroups, except for those with established ASCVD. 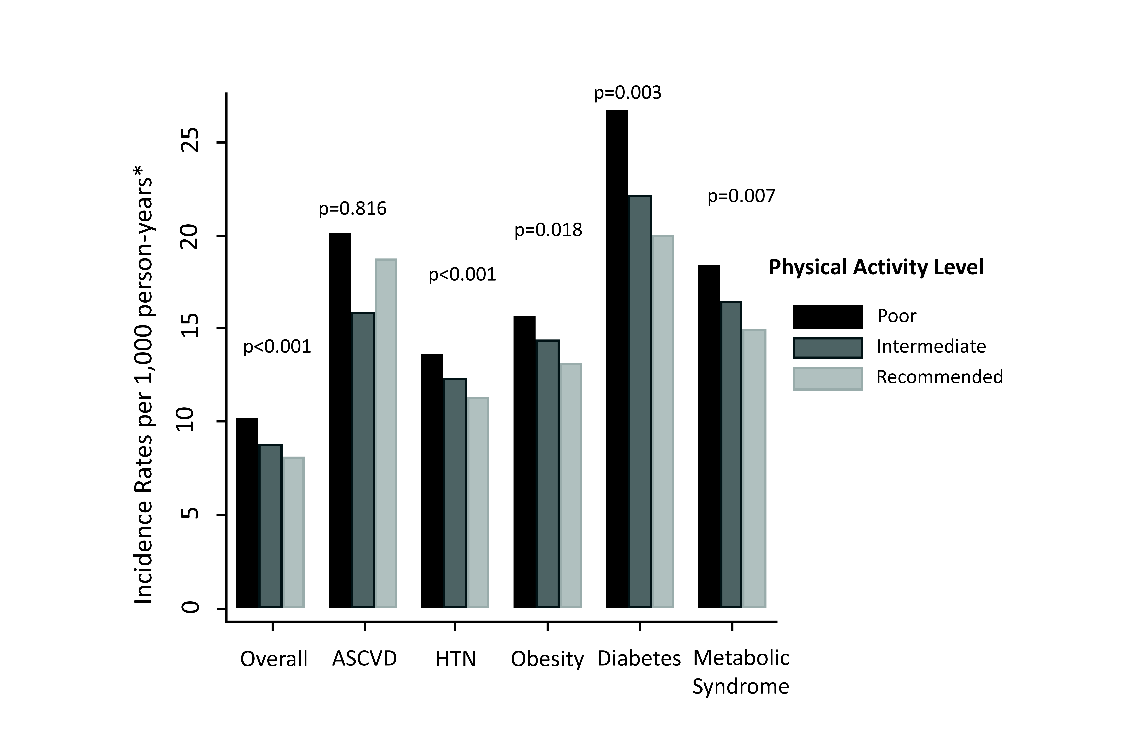 Importantly, in analyses considering PA levels over a 6-year period, persistently recommended PA was associated with a non-significant trend towards lower HF risk in persons with ASCVD.

This analysis of the ARIC study showed protective associations between higher levels of PA and lower incidence of HF among the overall study group of nearly 14,000 community-based participants. Additionally, regular PA was associated with lower HF risk in high-risk subgroups of participants with obesity, hypertension, diabetes mellitus, and metabolic syndrome; this association was not found to be significant among the high-risk subgroup of persons with established ASCVD.

These results reaffirm the importance of regular PA in prevention of HF not only in the general population, but maybe even more importantly, in those at higher risk for HF due to pre-existing conditions. PA has been shown to reduce blood pressure (BP) and promote favorable cardiac remodeling in persons with hypertension, and to have beneficial effects on insulin resistance, glucose homeostasis, and weight reduction in persons with obesity, diabetes mellitus, and metabolic syndrome, all of which may contribute to a lower HF risk in these groups.

While there was no significant protective association between higher PA and incident HF in persons with established ischemic heart disease, PA has other health benefits in this population, including improved survival. Furthermore, analyses incorporating PA levels over 6 years, indicated that performing recommended PA over prolonged periods may lead to some HF risk reduction in this population. As such, PA should continue to be recommended and promoted for this population.

It is important to consider other factors that might have participated in the lack of apparent "protective effect" of PA after an ASCVD event. Often, cardiac rehabilitation and other secondary prevention interventions involving PA are used more aggressively in persons with the most severe cases of acute myocardial infarction or stroke. These persons also have a higher risk of developing HF. Consequently, in persons who have had an ASCVD event, higher levels of PA could be a marker of greater severity of the event, and therefore, be a marker of increased risk of developing HF. Nonetheless, the findings of this study are consistent with previously published studies suggesting weaker associations of PA with incident HF once ischemic disease is established.

The findings of this study have important implications for HF prevention in the clinical setting. While achieving recommended PA levels is still an important approach to prevention, more research is needed to determine additional approaches to more effectively prevent HF and other cardiovascular events within different high-risk subgroups. Importantly, in this study, the majority of individuals did not meet guideline-recommended PA levels, indicating that effective strategies to promote PA could have significant population impact for HF prevention.

Higher PA is associated with lower HF risk among persons with hypertension, obesity, diabetes, and the metabolic syndrome. Even though higher PA level is associated with lower incidence of ASCVD, it may be less protective against HF in those with previously established ischemic heart disease. Despite its observational nature, this study highlights the large potential public health benefits that adequate levels of PA can have in the US population for prevention of HF, particularly among several very large at-risk subgroups.

YOU ARE HERE: Home > Latest in Cardiology > Physical Activity and Heart Failure in High-Risk Subgroups