Cardiovascular Care of the Tactical Athlete: More Than Just the Score

The views expressed in this article are those of the authors and do not necessarily reflect the official policy or position of the Department of the Navy, Department of Defense, nor the US Government.

Case History: A 23-year-old active duty Marine infantryman presents to your office after recurrent episodes of syncope. Over the past 2 months he reports three episodes of syncope all occurring in the setting of physical exertion. The first occurred during a field exercise when he was marching with 70 lbs. of gear and equipment. The second occurred during a five-mile run with his unit for physical training. The third episode occurred last week during the "maneuver under fire" event of the Combat Fitness Test. This event is a 300-yard course consisting of multiple events including sprinting, high and low crawling, dragging and carrying another Marine, grenade throwing, and ammunition resupply.1 He is of Caribbean descent. His physical exam is normal. He has an electrocardiogram (ECG) (Figure 1) that demonstrates T wave inversions in the anterior leads. They are deploying overseas in 4 weeks. His unit commander asks you if he will be able to go on the deployment. 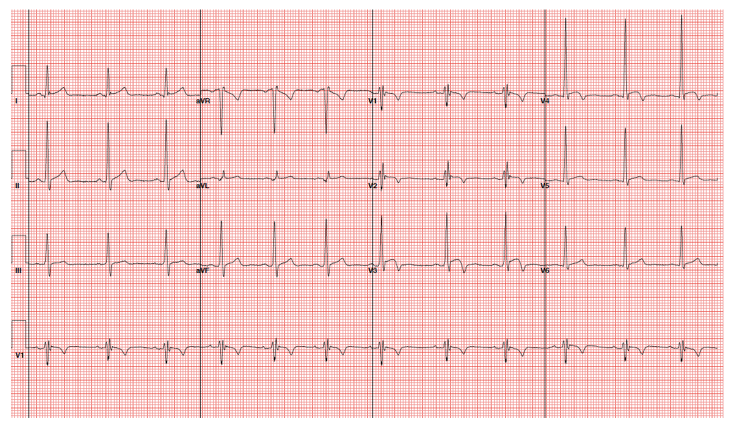 The definition of a competitive athlete from the revised Bethesda guidelines is "one who participates in an organized team or individual sport that requires regular competition against others as a central component, places a high premium on excellence and achievement, and requires some form of systematic (and usually intense) training".2 This definition does not include, however, the tactical athletes that make up our military, first responders, law enforcement, and fire departments. The tactical athlete is one who puts service first, not competition. They are often asked to perform their duties under life-threatening conditions while carrying heavy loads of gear and equipment. The tactical athlete frequently operates in austere and extreme environments. The extreme heat of a burning building or the high altitude of mountain warfare are common stressors encountered by the tactical athlete. Maximum output of the cardiovascular system, often with little advanced warning or warm up, is commonly encountered by these individuals. The catecholamine surge that results from suddenly coming upon an ambush as an infantryman or having to chase down and restrain a perpetrator on foot after a traffic stop goes awry, compound the load on the cardiovascular system. This abrupt need for maximal output from the cardiovascular system, while under potentially life-threatening psychological duress, is unique to the tactical athlete. Moreover, there is no off-season for the tactical athlete. This lack of structured rest and recovery time intensifies the stresses faced by these athletes. Failure to perform can not only put their life at risk, but the lives of their teammates and the victims they serve and protect.

Cardiovascular disease is common among tactical athletes. A 2018 report by the National Fire Protection Association on firefighter fatalities notes that approximately 45% of on duty firefighter deaths were due to cardiovascular causes with the vast majority due to sudden cardiac death.3 A similar study examining the type and incidence of injuries in firefighters found that the most common injury sustained by firefighters in the line of duty was overexertion or strain representing roughly one third of all injuries.4 A 2014 study found that up to 10% of all on duty deaths for law enforcement officers were due to sudden cardiac death.5 Psychologically and physically stressful situations such as restraints, altercations, and pursuits were associated with a 30-70 times higher risk of sudden cardiac death than routine/non-emergency duties.5 The 2017 study on the Health of the Force for the US Army found that cardiovascular disease afflicted 7.4-10.6% of the force between 2006 and 2016 and was the most prevalent chronic disease affecting soldiers.6 The cardiologist caring for the tactical athlete should know that cardiovascular disease is relatively common in tactical athletes and be familiar with the stresses encountered by these patients.

These physical demands required of the tactical athlete are different than those of the competitive athlete and require special consideration and knowledge by the physician caring for these individuals. Careful and detailed questioning about the patients physical training, frequency, modalities, job expectations and requirements are crucial to understanding what these patients encounter as part of their daily lives. The Marine infantryman described in the case report routinely will go on 5-10-mile ruck (a forced activity carrying heavy gear) marches carrying 50-100 pounds of gear and equipment. He or she (the same demands apply to soldiers of both gender) will participate in field exercises for several days at a time where they may encounter extremes of temperature, humidity, and altitude. They will need to be prepared to meet the demands of suddenly finding themselves immersed in the chaos of a firefight with little or no advanced warning. The catecholamine surge from the psychological stress of these encounters is not insignificant. Several studies have independently demonstrated a five to sevenfold increase in the risk of sudden cardiac death among firefighters in the alarm response period alone.7 A 2007 study examining causes of deaths of US Firefighters between 1994 and 2004 found a 2.8-14.1 fold increase in the risk of cardiovascular death just during the alarm response period before any physical exertion was performed.8 The same study found that 32% of deaths from coronary heart disease occurred during fire suppression activities despite the fact that fire suppression accounted for only 1-5% of the firefighters on duty time.8 Nutrition, rest, and recovery are often not able to be controlled by the tactical athlete. Our Marine patient example will exercise mostly with his unit and may not be able to modify his workouts based on his individual level of fatigue. This inability to regulate pace, intensity, load, and rest periods, particularly in workplace, has been linked to an increased risk of cardiovascular disease.9

When asked to determine "fitness for duty", it is important for the physician to consider who may be impacted by the incapacitation of the patient sitting in their office. For example, we can hypothesize that our Marine is returned to duty before his evaluation is completed. He then has a syncopal event on the battlefield, drops his firearm which discharges and strikes one of his fellow Marines; or he has a syncopal event while playing a critical role in defending another soldier and many other team members die. The safety of the other unit members and the success of the mission have now been compromised. For this reason, the burden of proof for the tactical athlete is higher than the competitive athlete, and the concept of "shared decision making" needs to be broadened to include all stakeholders. Diagnostic testing will likely be required to ensure an accurate diagnosis and to screen for the presence of high-risk conditions. Often the diagnosis can be made with a careful history and physical exam, however, there should be a low threshold to order additional testing such as an ECG, echocardiogram, stress testing, and potentially advanced cardiac imaging such as a computed tomography (CT) or magnetic resonance imaging (MRI) when appropriate. Implantable loop recorders can be particularly useful in addition to extended wear ambulatory rhythm monitors for symptom-rhythm correlation. During stress testing, attempts should be made to achieve a maximal test that simulates the conditions of the tactical athlete as best as possible.10 Customized exercise protocols other than the standard Bruce are virtually always necessary due to the fitness level of those being tested. Ramp protocols geared to the athlete's fitness are useful for estimating maximal oxygen uptake, but high intensity, repetitive burst efforts that simulate the demands of the conditions are especially important, particularly if the key question is arrhythmia provocation or hemodynamic integrity. Due to the heterogeneity of exercise protocols that are used, exercise capacity should be reported in estimated (or even better, directly measured) metabolic equivalents (METs), not minutes exercised unless the specific protocol used is described.11 Attempts should be made to recreate the conditions of work place exertion. The simplest way to do this is to perform the test while the patient is wearing their battle dress uniform or the attire worn in the field as opposed to shorts and a T-shirt. When evaluating the tactical athlete, the treating physician should be sufficiently satisfied that the patient is acceptably low risk, both to themselves and the other members of his or her team.

A standardized, cost effective, and diagnostically efficient approach to evaluating the tactical athlete with cardiovascular complaints is paramount. In addition to considering the unique physical demands of the tactical athlete, the physician caring for the tactical athlete should be aware of the medical fitness standards for the athlete's line of work. Every branch of the military has general guidelines for medical fitness for duty and retention.12-14 Additional guidelines exist within the military for high risk activities such as pilots, aircrew, or special operations. The National Fire Protection Association publishes protocols and initiatives to promote the health and safety of firefighters.4 Medical fitness standards for law enforcement officers are published locally and can vary by city and state. These standards are useful tools in focusing the evaluation of these patients and should be referenced early in the evaluation process. Familiarity with the expectations for medical fitness and readiness of the tactical athlete's organization will avoid unnecessary delays in returning these patients to duty.

Tactical athletes are not the same as competitive athletes. The tactical athlete is exposed to unique forms of cardiovascular stress and should be approached differently than a competitive athlete by the treating physician. A thorough evaluation is essential for determining the risk of returning the patient to full duty. The evaluation may require highly specific testing in order to prove the patient is low risk. References exist to help guide these evaluations. One of the goals of the upcoming tactical athlete cardiovascular guidelines will be to provide primary care physicians and cardiologists with a standardized approach to these patients.

YOU ARE HERE: Home > Latest in Cardiology > Cardiovascular Care of the Tactical Athlete: More Than Just the Score