The normal pericardium consists of a double-layered fibroserous sac that contains the heart and serves the functions of fixing it within the thorax, preventing its overfilling, reducing frictions and protecting it from infections of the surrounding structures. The pericardium develops during the fifth week of embryonic life from the fusion of the pleuropericardial membranes. Failures of this process, possibly due to premature atrophy of the left or right duct of Cuvier, lead to rare congenital defects such as the complete or partial agenesis of the pericardium.1

The first description of a congenital pericardial agenesis (CPA) is attributed to the Paduan anatomist Realdo Colombo, in 1559. It is an exceedingly rare condition with an estimated incidence < 1:10.000, more frequent in males.1,2 The true prevalence may be, however, underestimated, as most patients are asymptomatic, and the diagnosis is tricky and likely to be missed. CPA is generally an isolated finding, but is occasionally associated with other congenital cardiac or systemic disorders, most notably atrial septal defects, tricuspid atresia, bronchogenic cysts, pectus excavatum, or included in the spectrum of rare congenital syndromes, like the VATER syndrome (vertebral defects, anal atresia, trachea-esophageal fistula, and radial and renal dysplasia).3

According to the extension and location,4 CPA are commonly classified as in Table 1.

Data from1,4 The left-sided pericardial defects are more frequent than the right-sided ones, due to embryologic differences in the development of the two sides.2 The complete pericardial defects are generally free of complications. Conversely, partial defects may be occasionally life-threatening, due to the risk of herniations or strangulation of cardiac structures,10 or compression of coronary artery.6

Complete CPA is normally a silent condition, characterized by no or nonspecific symptoms and an unremarkable physical examination. Therefore, the diagnosis is mostly incidental during cardio-thoracic surgery or thoracic imaging performed for other reasons.5 When present, symptoms may include atypical chest pain (reported as squeezing or stabbing, unrelated to physical exertion), dyspnea, palpitations and dizziness.3 On physical examination, the apical beat can be migratory and displaced in postero-lateral position, past the midaxillary line; a systolic ejection murmur due to excessive heart motion may be sometimes appreciable.

By contrast, patients with partial CPA are more often symptomatic. Typical complaints include trepopnea (dyspnea occurring when lying on one side, more frequently the left one6), and chest pain, due to the compression of the coronary arteries by the rim of the defective pericardium; cases of sudden cardiac death due to these mechanisms are anecdotally reported.7

Electrocardiogram (ECG) is mostly unremarkable in patients with partial CPA. Conversely, in complete left CPA, ECG commonly shows right-axis QRS deviation associated with incomplete right bundle branch block and poor R wave progression, due to the leftward displacement of the precordial transition (Figure 1).3 Electrical alternans of both P and QRS potentials have also been described, due to the increased mobility of the heart in the chest.8 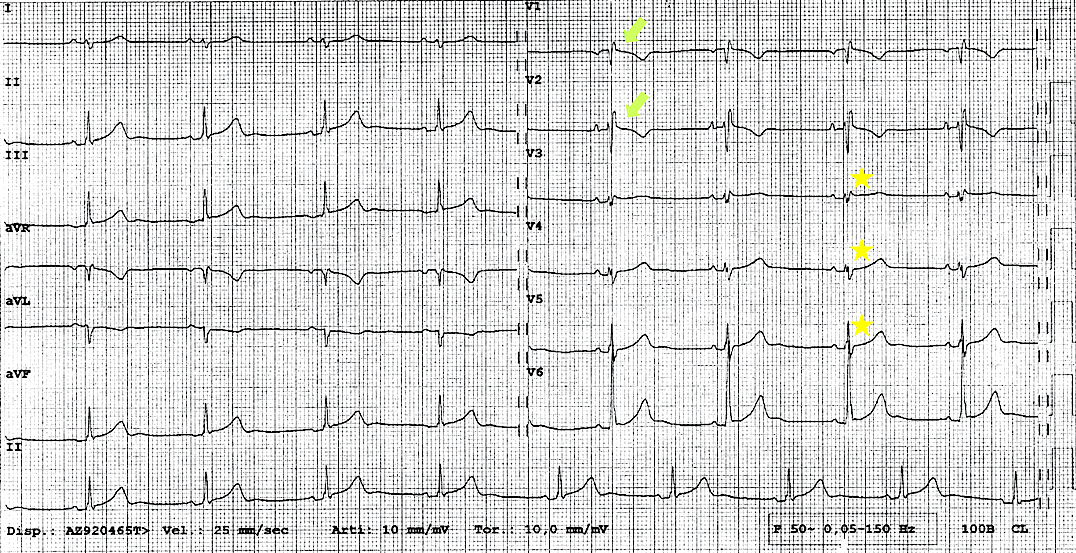 In patients with complete left CPA, chest X-ray can reveal the posterior and leftward shift of the heart, which is characterized by the straightening and elongation of the left border of cardiac silhouette ("Snoopy sign")9 and by the loss of its right border, covered by the spine (Figure 2). Another typical sign is the interposition of lung tissue (seen as a black band) between the aorta and the pulmonary artery, and between the base of the heart and the left hemidiaphragm (Figure 2). In non-complicated partial CPA, chest X-ray is generally normal. Left-sided partial defects can occasionally present a bulge of the left upper heart border which may suggest the herniation of the left atrial appendage through the defect.10 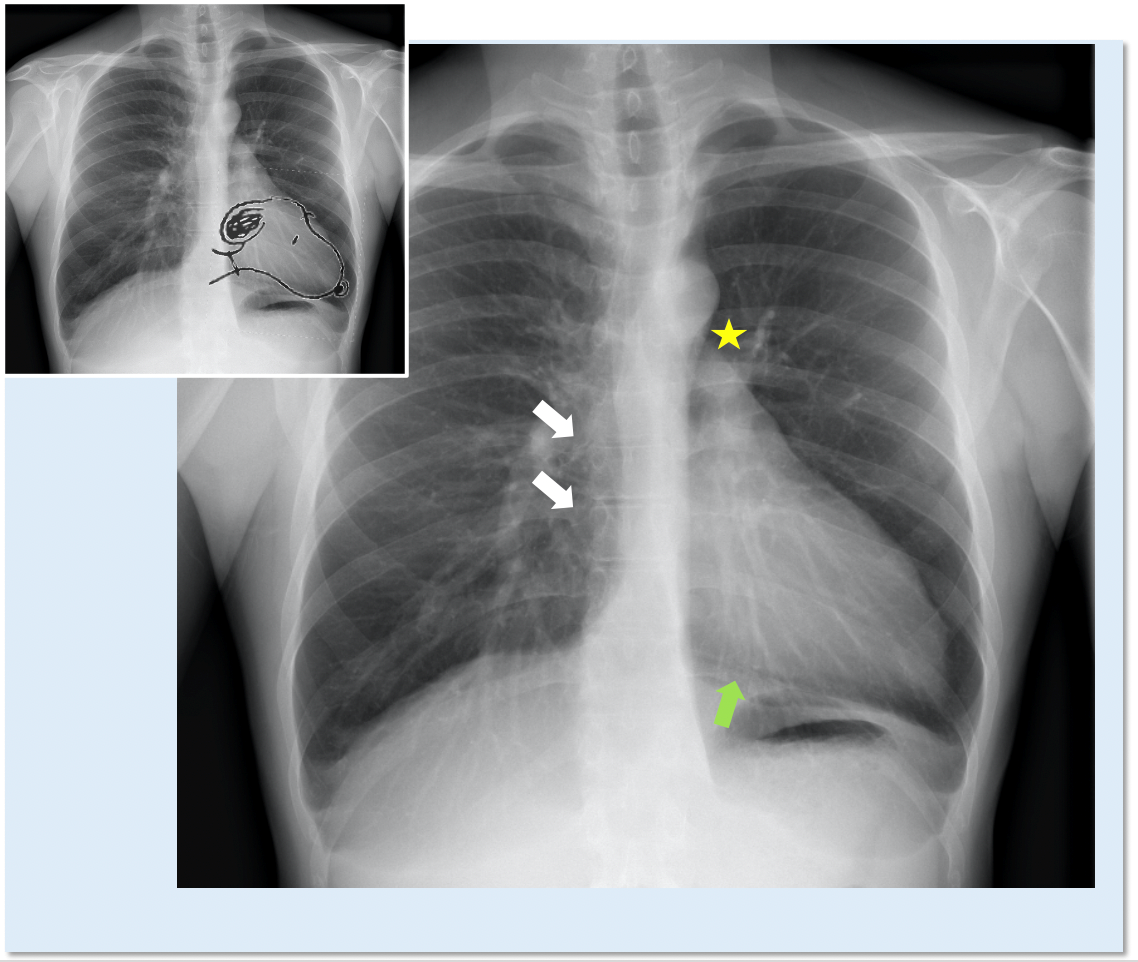 Cardiac imaging findings in complete CPA are mostly attributable to the abnormal position and orientation of the heart in the chest. In partial defects, they are more variable in relation to location, size and eventual complications of the pericardial defect.

Echocardiography is the cardiac imaging modality which first can give some clues to the presence of complete CPA.4 Conventional acoustic windows are generally poor, because of the unusual heart position. For this reason, supine decubitus, rather than the left-lateral, can help improve the image quality (Figure 3). 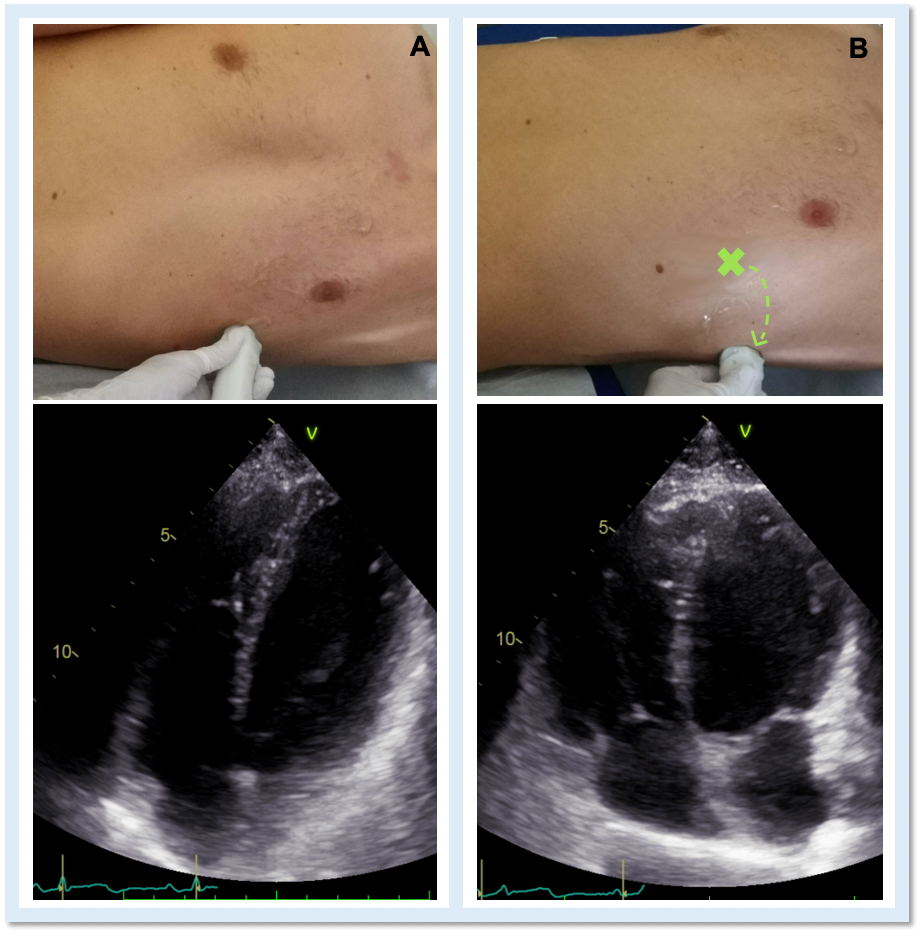 In left defects, from the parasternal views, the leftward shift of the heart results in the visualization of a wider part of the right ventricle, giving the impression of a right ventricular (RV) dilatation, which frequently leads to the suspicion of arrhythmogenic RV cardiomyopathy or cardiac shunts (Video 1).11

The exaggerated movement of left ventricular (LV) posterior wall can produce a paradoxical motion of the interventricular septum, which moves anteriorly during systole and posteriorly during diastole. The apical view is laterally-displaced and the heart shape may resemble a "teardrop", due to the elongation of the atria and widening of the ventricles. Additional features are a sharp angulation of the atrio-ventricular groove and an outward bulging movement of the LV inferior wall, appreciable on 2-chamber view. Exercise-stress echocardiography can reveal an exaggerated, "pendulum-like" movement of the heart, the equivalent sign of the electrocardiographic electrical alternans (Video 1).12 Since strain analysis does not commonly show significant anomalies, it can be inferred that the absence of the pericardium might not alter the myocardial performance.4 Doppler techniques may detect decrease of the systolic flow and systolic-to-diastolic flow ratio on pulmonary vein flow analysis, possibly due to the absence of the negative intrapericardial pressure.2

In patients with partial CPA, similarly to chest X-ray, also echocardiography is normally unremarkable. In particular cases, regional bulging of the ventricles, herniation of atrial appendages, wall motion ventricular abnormalities due to coronary compression, can be appreciated.4

When the suspicion of CPA is raised from first-line examinations, more advanced cardiac imaging modalities like cardiac magnetic resonance and cardiac computed tomography can be useful to confirm the diagnosis.

On cardiac magnetic resonance (CMR), the normal pericardium appears as a curvilinear structure, with intermediate-to-low signal on both T1 and T2-weighted images, surrounded on either side by high-signal epicardial and mediastinal fat; the presence of this fat and eventual fluid makes visualization of the pericardium easier.4 However, this structure can be difficult to visualize in the area of the LV lateral wall, particularly in young individuals with minimal epicardial fat. With this regard, T1-weighted images can be more accurate in displaying pericardial defect areas. Accordingly, as in echocardiography, CMR diagnosis of CPA relies more on the identification of indirect features, rather than direct ones. In complete left CPA, the levorotation of the heart with postero-lateral shift of LV apex is easily recognizable on axial images (Figure 4A-B). As in chest X-ray, the interposition of lung tissue in the anterior space between the aorta and the pulmonary artery or between the diaphragm and the base of the heart can also be appreciated on CMR (Figure 4D).5 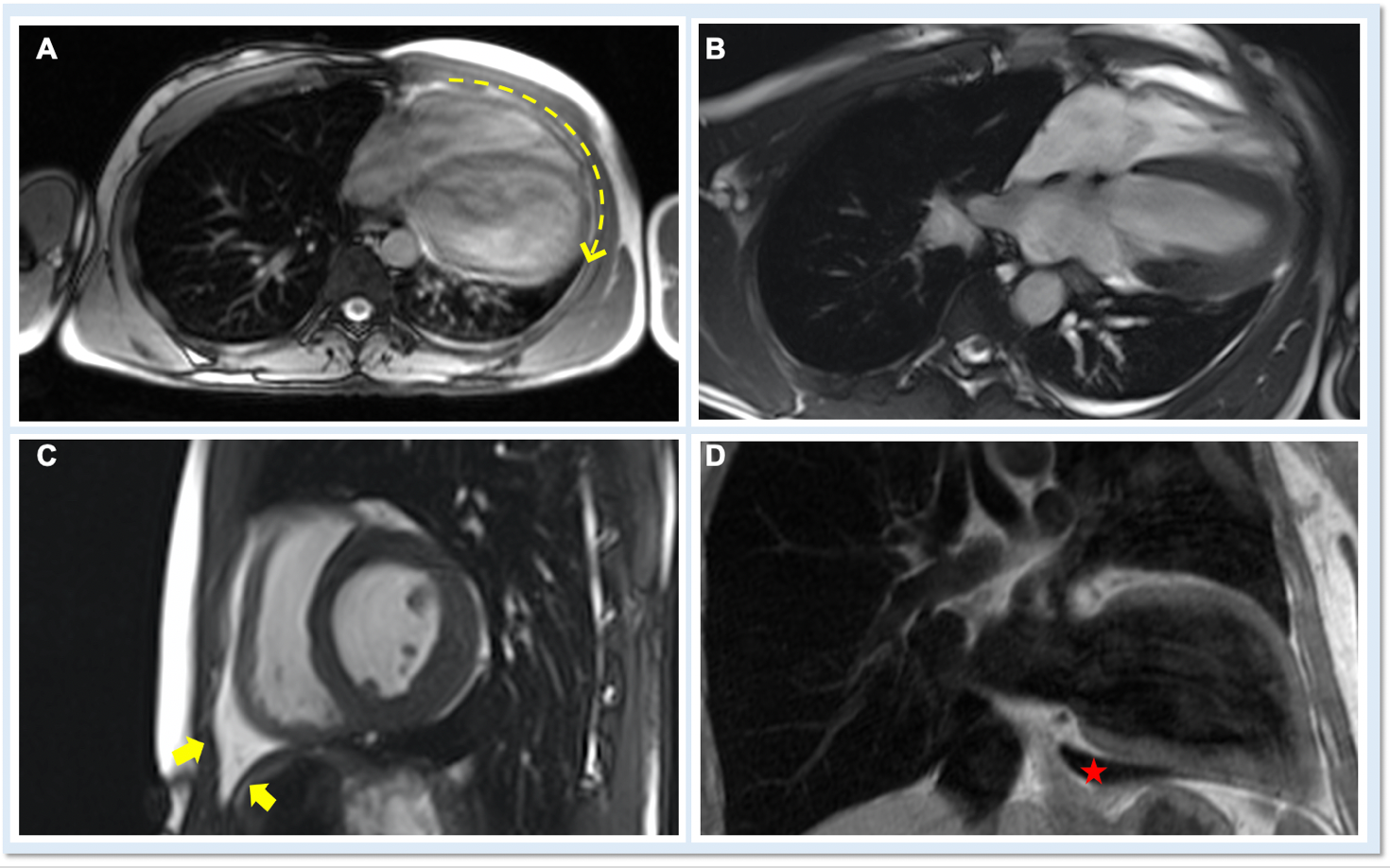 Cine images can better show the anatomical and functional abnormalities visualized by echocardiography, such as the excessive mobility of the cardiac apex (up to 15 mm instead of the normal 1,5-2 mm) or the "teardrop" cardiac shape (Video 2).7

Scanning the patient in prone position could be useful in demonstrating the "vertical cardiac flop", which can occur in hearts with a pericardial defect.13 CMR has higher sensitivity in detecting high-risk features of partial CPA, as the presence of LV myocardial creases, coronary artery compression, or evidence of ischemia on perfusion imaging. Complications as the herniation of chambers through a partial defect can be easily detected as a prominent convexity along the cardiac silhouette. CMR is also helpful to exclude alternative diagnosis, like arrhythmogenic RV cardiomyopathy or congenital heart disease, suspected by echocardiography.

Compared with CMR, cardiac computed tomography (CCT) is more sensitive in identifying pericardial morphological abnormalities, even in case of small and incomplete defects, thanks to a greater spatial resolution. Acquisition time is shorter than CMR, however the ionizing radiation exposure and the lack of cine-images for ventricular function analysis may limit the CCT application, especially in pediatric population.14

An ECG-gated CCT scan with administration of contrast medium is advisable to obtain clear and motion-free images of the pericardium. The normal pericardium is best seen in systole and appears as a bright, linear structure with thickness of 1-2 mm, well contrasted by the surrounding low attenuation of the adipose tissue. Visualization of the pericardium well correlates with the amount of fat present, so that it is better recognizable over the right atrium and right ventricle than in proximity of the lateral or posterior wall of the LV. The identification of absence of both pericardial tissue and fat is therefore a direct sign of CPA (Figure 5A). Other indirect, but pathognomonic signs are described in Figure 5B.

The majority of patients with total or left CPA is asymptomatic and do not require any intervention. Conversely, patients with symptomatic or complicated partial defects (ischemic disease, cardiac chambers herniation) should undergo cardiac surgery.2 Treatment can consist on patch closure of the defect, total pericardiectomy or enlargement of the defect for incarceration prevention. Management of asymptomatic and uncomplicated defects is still debated.1

YOU ARE HERE: Home > Latest in Cardiology > Congenital Pericardial Agenesis