Aldosterone has been implicated in cardiovascular (CV) pathophysiology for many decades, specifically for its contribution to heart failure (HF) as well as kidney and vascular disease.1,2 This review presents an overview of the physiology and clinical studies involved with both steroidal (spironolactone and eplerenone) mineralocorticoid receptor antagonists (MRA) along with the newer nonsteroidal MRAs like finerenone. Before we can appreciate the contribution of aldosterone to the pathophysiology of CV and renal disease, we need to understand its physiology.

Aldosterone Excess
Like most things in biology, there is a "bell curve" relationship between hormonal levels and stable biological function. This relationship is also true of aldosterone. Increased aldosterone levels exert detrimental effects on the heart and kidneys in patients suffering from HF, primary hypertension, chronic kidney disease (CKD), and primary aldosteronism. Aside from promoting sodium retention and potassium loss in the kidneys, aldosterone is associated with myocardial fibrosis and cardiac remodelling by promoting collagen formation and vascular fibrosis and dysfunction, baroreceptor dysfunction, and reduced myocardial uptake of norepinephrine.3-7

Aldosterone holds a vital role in the pathophysiology of HF. At the same time, blockade of the renin-angiotensin-aldosterone system (RAAS) with angiotensin-converting enzyme (ACE) inhibitors or angiotensin receptor blockers (ARBs) may not attenuate its detrimental effects due to the phenomenon of aldosterone escape.8,9 Aldosterone blockade can thus attenuate HF progression by preventing sodium retention and myocardial fibrosis. In contrast, it may further prevent sudden cardiac death by attenuating potassium loss and increasing the myocardial uptake of norepinephrine.

Implications of Aldosterone Escape
Interruption of the RAAS has become established as a leading therapeutic strategy in treating chronic heart and kidney disease. ACE inhibitor and ARB suppression of aldosterone is not uniform. Plasma aldosterone levels have been documented to be elevated in a subset of patients despite therapy. This phenomenon termed aldosterone escape or aldosterone breakthrough constitutes a rationale for the current mineralocorticoid receptor blockade in a wide array of CV disorders.12 The most conservative and most clinically relevant definition for aldosterone breakthrough is a serum aldosterone level that exceeds a baseline (pre-ACE inhibitor and/or ARB therapy) value 6-12 months after initiation of RAAS-blocking therapy.13

Aldosterone escape is relevant to the panoply of CV disorders.1,14 Elevated aldosterone concentrations have been reported in up to 40% of patients with symptomatic congestive HF13 despite use of an ACE inhibitor and in 50% of those with left ventricular (LV) hypertrophy.17 As early as 1984, Cleland et al. studied patients with HF and reported a mean fall of only 20% in plasma aldosterone levels after 6-weeks' treatment with captopril in patients with congestive HF.18

Aldosterone levels are also known to increase progressively in patients treated with an ACE inhibitor following acute myocardial infarction (MI).19 To the extent that the constellation of HF and CKD are complementary in reinforcing and exacerbating each other, it should be noted that over 20 years ago, it was postulated that aldosterone constitutes a determinant of progressive renal disease. In concert, these reservations collectively support the formulation that aldosterone levels are frequently elevated despite renin-angiotensin system blockade in patients with symptomatic HF or LV hypertrophy. Consequently, they constitute a platform for considering the extensive range of pathophysiological mechanisms whereby aldosterone via mineralocorticoid receptor activation promotes progression of LV hypertrophy and HF.

Steroidal MRAs in CV Trials
Heart Failure
All major trials of HF with MRAs are summarized in Table 1. Steroidal MRAs, including the first-generation spironolactone and the second-generation eplerenone, have a Class IA recommendation for HF with reduced ejection fraction (HFrEF) based on trials showing improved outcomes in terms of mortality and hospitalization for HF.20,21

The first large-scale randomized controlled trial of MRA in HFrEF was RALES (Randomized Aldactone Evaluation Study) that randomized 1,663 patients with severe HF (New York Heart Association [NYHA] Class III or IV) and an LV ejection fraction (LVEF) ≤35%, already treated with an ACE inhibitor, a loop diuretic, and digoxin, to spironolactone (at 25 mg daily) or placebo.22 The trial was discontinued early after a mean period of 24 months due to the superiority of spironolactone; the drug significantly reduced the primary endpoint of all-cause death compared to placebo (relative risk [RR] 0.70; 0.60-0.82; p < 0.001), an effect that was attributed to reductions of death from HF progression and sudden cardiac death. Spironolactone also significantly reduced the risk of hospitalization for worsening HF (RR 0.65; 0.54-0.77; p < 0.001) and improved HF symptoms.

Because spironolactone binds not only to the mineralocorticoid receptor but also to androgen and progesterone receptors, it may result in gynecomastia or impotence in men or menstrual disorders in women. In RALES, spironolactone was followed by a significant increase in the occurrence of gynecomastia or breast pain in 10% of men.22 This effect can be attenuated by the second-generation MRA eplerenone that has a greater selectivity for the mineralocorticoid receptor than spironolactone. Eplerenone was evaluated in two large-scale randomized controlled trials in HFrEF.

A network meta-analysis comparing spironolactone, eplerenone, and canrenone/potassium canrenoate in HFrEF based on 14 randomized controlled trials with a total of 12,213 patients showed no significant superiority of MRA in the primary endpoint of all-cause mortality, the secondary endpoints of CV mortality and HF hospitalization, and the safety endpoints of hyperkalemia and acute renal failure.25 There was, however, a difference in male gynecomastia in favor of eplerenone. To extend the spectrum of MRA effects in HF, a separate meta-analysis of spironolactone in HF with preserved ejection fraction (HFpEF), based on 7 studies totalling 4,147 patients, showed that spironolactone improved LV diastolic function indices but had no effect on all-cause mortality and hospitalization or 6-min walk test distance.26

In HFpEF, the large-scale trial TOPCAT (Treatment of Preserved Cardiac Function Heart Failure With an Aldosterone Antagonist) evaluated the effects of spironolactone versus placebo in 3,445 symptomatic patients with an LVEF ≥45%.27 Spironolactone (at 15-45 mg daily) failed to reduce the primary endpoint of death from CV causes, aborted cardiac arrest, or hospitalization for HF (HR 0.89; 0.77-1.04; p = 0.14); hospitalization for HF was, however reduced with spironolactone (HR 0.83; 0.69-0.99; p = 0.04), and there was an increase in the incidence of serum creatinine elevation as well as hyperkalemia (18.7% in the spironolactone group versus 9.1% in the placebo group). A post-hoc analysis of the study showed diverging results between patients randomized in Russia and Georgia, who had a low event rate in both treatment arms and for whom spironolactone did not affect outcomes, and those randomized in Americas (United States, Canada, Brazil, and Argentina), who had a fourfold higher event rate and for whom the drug was effective.28 It has been postulated that these differences accounted for the diverse mode of HFpEF diagnosis between the two regions.

Novel Nonsteroidal MRAs
Steroidal MRAs are limited by adverse events, including hyperkalemia, worsening renal function, gynecomastia and impotence (in men), and menstrual disturbances (in women). To overcome these limitations, nonsteroidal selective MRAs have been developed. There are four such agents in various stages of development; however, the only one with any outcome data is finerenone.

Preclinical studies show that finerenone exhibits a high selectivity toward the mineralocorticoid receptor along with a low affinity for androgen, glucocorticoid, progesterone, and estrogen receptors, thus combining a higher selectivity than spironolactone with a higher affinity than eplerenone (Figure 1).2,34 These properties lead theoretically to the maintenance of on-target efficacy with minimization of off-target adverse events.25 In addition, according to preclinical evidence, finerenone seems to have a balanced tissue distribution between the heart and the kidneys, in contrast to steroidal MRAs that seem to focus more on the kidneys rather than the heart.35 These properties may provide an advantage to finerenone over steroidal MRA, particularly in high-risk patients, such as those with CKD and diabetes mellitus (DM). 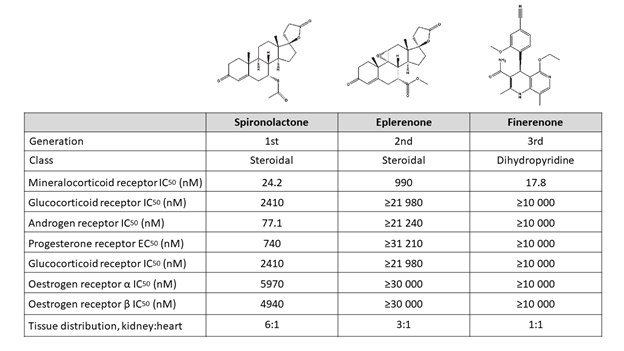 Heart Failure
Several clinical trials have evaluated the effects of finerenone compared to placebo, spironolactone, or eplerenone in patients with HF (Table 1). In the ARTS (Mineralocorticoid Receptor Antagonist Tolerability Study) program, different dosing schemes of finerenone (2.5, 5, or 10 mg once daily or 5 mg twice daily) were initially assessed in 65 patients with HFrEF and mild CKD and subsequently compared with placebo and open-label spironolactone (at 25-50 mg daily). These were tested in 392 patients with HFrEF and moderate CKD.36 Finerenone at 5-10 mg daily was as effective as spironolactone in decreasing natriuretic peptides, and it was associated with a lower risk of worsening renal function and hyperkalemia. In ARTS-HF (Mineralocorticoid Receptor Antagonist Tolerability Study-Heart Failure), 1,066 patients with worsening HF and DM and/or CKD were randomized to finerenone (at 2.5, 5, 7.5, 10, or 15 mg, titrated to 5, 10, 15, or 20 mg) or eplerenone (25 mg every other day, titrated to 25 and 50 mg daily).37 Finerenone was well tolerated and had an effect similar to eplerenone on the primary endpoint of patients with a >30% decrease in plasma N-terminal pro-B-type natriuretic peptide (NT-proBNP) until day 90. In addition, finerenone at 10-20 mg significantly reduced the exploratory clinical endpoint of death from any cause, CV hospitalizations, or emergency presentation for worsening HF (HR 0.56; 0.35-0.90; p = 0.02).

A meta-analysis of ARTS, ARTS-HF, and ARTS-HF Japan (A Randomized Controlled Study of Finerenone vs. Eplerenone in Japanese Patients With Worsening Chronic Heart Failure and Diabetes and/or Chronic Kidney Disease)38 on a total of 1,520 patients showed that finerenone improved cardiac and renal biomarkers such as NT-proBNP and urinary albumin/creatinine ratio.39 In addition, finerenone at 10 mg daily has similar anti-remodeling effects with steroidal MRA at 25-50 mg daily with a lower incidence of adverse events, associated with lower serum potassium and higher estimated glomerular filtration rate (eGFR) levels.

The ongoing FINEARTS-HF (Study to Evaluate the Efficacy [Effect on Disease] and Safety of Finerenone on Morbidity [Events Indicating Disease Worsening] & Mortality [Death Rate] in Participants With Heart Failure and Left Ventricular Ejection Fraction [Proportion of Blood Expelled Per Heart Stroke] Greater or Equal to 40%) will enroll approximately 5,500 patients aged 40 or older with HFpEF (LVEF ≥40%) to evaluate the effects of finerenone on the composite of CV death and HF events, Kansas City Cardiomyopathy Questionnaire score, a composite renal endpoint, and death from any cause.

Diabetic Kidney Disease
The FIDELIO-DKD (Finerenone in Reducing Kidney Failure and Disease Progression in Diabetic Kidney Disease) trial of advanced diabetic kidney disease and high CV risk randomized 5,734 patients already treated with renin-angiotensin system blockade to finerenone or placebo.40 Finerenone significantly reduced the primary composite endpoint of kidney failure, a sustained decrease of at least 40% in the eGFR from baseline, or death from renal causes (HR 0.82; 0.73-0.93; p = 0.001) as well as the key secondary composite CV endpoint of death from CV causes, nonfatal MI, nonfatal stroke, or hospitalization for HF (HR 0.86; 0.75-0.99; p = 0.03). Importantly, the drug reduced the composite CV endpoint consistently in patients with and without CV disease.41 Additionally, in a subgroup analysis, finerenone reduced the risk of new-onset atrial fibrillation (HR 0.71; 95% confidence interval, 0.53-0.94; p = 0.016).42 The rates of both adverse events and drug discontinuation due to hyperkalemia were generally low (2.3% and 0.9%, respectively).

The companion trial to FIDELIO-DKD, the FIGARO-DKD (Efficacy and Safety of Finerenone in Subjects With Type 2 Diabetes Mellitus and the Clinical Diagnosis of Diabetic Kidney Disease) trial, randomized 7,437 patients with less-severe CKD. It investigated the effects of finerenone on the primary endpoint of CV death, nonfatal MI, nonfatal stroke, or hospitalization for HF.43 The top-line results of this trial were recently announced in the press and were positive. The remaining trial results of FIGARO-DKD will be presented at the upcoming European Society of Cardiology meeting.

Lastly, relative to this review, a recent animal study shows additivity when combining low doses of finerenone with a low dose of a sodium-glucose cotransporter-2 inhibitor. The pathology findings in this animal study showed greater reduction in renal fibrosis and clinically great albuminuria reduction in the combination group relative to high doses of either agent alone.44 Further analyses of the FIDELIO-DKD and FIGARO-DKD trials will examine this observation.

YOU ARE HERE: Home > Latest in Cardiology > Aldosterone Antagonists and CVD