A Recreational Athlete with Sudden Cardiac Arrest and Coronary Artery Disease: Part I

He had a protracted hospital course, including prolonged intensive care unit (ICU) stay requiring extracorporeal membrane oxygenation (ECMO). On repeat catheterization, the LM thrombus was once again demonstrated but multiple attempts at aspiration were incompletely successful. A definitive etiology of the coronary thrombus was never identified. Review of intravascular ultrasound (IVUS) images from his catheterization suggested proximal LAD atherosclerosis with positive remodeling, raising the likelihood of his acute coronary syndrome being secondary to plaque pathology. Repeat echocardiograms showed LVEF in the mid-30s%, severe hypokinesis of the anterior, septal, and apical walls and no LV thrombus.

After a month-long hospitalization, a regadenoson stress CMR showed the LVEF improved to 38%, no ischemia, and less than 50% gadolinium enhancement in the LAD territory, suggestive of residual viability (Figure 2). As the patient was readied for transfer to an acute rehabilitation facility, the plan for risk stratification and safe rehabilitation/eventual return to participation in physical activity was discussed.

Figure 2: CMR scan at time of discharge post-myocardial infarction, demonstrating LVEF 38%, anterior/anteroseptal/apical hypokinesis and subendocardial LGE in the LAD territory comprising 25-50% of wall thickness, suggesting viable myocardium. The LGE noted in the previous CMR appeared to have resolved on this scan, with equivocal LGE versus blood pool artifact remaining in the anterolateral papillary muscle. 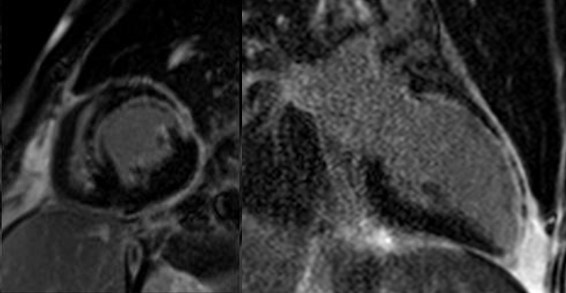 Given the reduced LVEF, residual LM thrombus post STEMI, and a possible episode of myocarditis 3 months ago, what would be the appropriate recommendation on rehabilitation (rehab) and return to his prior activities?

The correct answer is: B. Steady state cardiac rehab, not HIIT cardiac rehab, followed by a functional assessment for LVEF, ischemia and arrhythmias to guide exercise prescription.

Decisions regarding the timing and intensity of cardiac rehabilitation and the encouragement or prohibition of activity are difficult, particularly in highly active athletes. Both the American College of Cardiology (ACC) and the European Society of Cardiology (ESC) have published guideline/consensus recommendations regarding return to play (RTP) decision making for athletes with myocarditis1,2 as well as coronary artery disease (CAD).3,4

For this patient, the guidance of his activity should initially be based on his myocarditis. Both ACC and ESC guidelines recommend exercise prohibition in athletes with myocarditis for 3-6 months depending on their clinical course, with return to participation determined by recovery of LV systolic function, biomarker resolution of myocardial injury/inflammation, monitoring for ventricular arrhythmias, and exercise ECG testing.1,2 This recommendation rests on data showing exercise-induced accelerated viral replication during the active phase of infection and increased rates of sudden cardiac death and ventricular arrhythmia in the immediate post-inflammatory period. In this patient's case, it is not clear that the myocarditis and acute coronary syndrome events were causally related in any way.

The ACC recommends that athletes with atherosclerotic CAD undergo maximal exercise testing to evaluate functional tolerance and to identify any inducible ischemia or arrhythmia. The LVEF should also be known.1 This evaluation may occur as part of the initiation of cardiac rehabilitation. The ESC notes that athletic patients with CAD and a LVEF <50% are considered high-risk for exercise-related morbidity and mortality.2 The ACC/AHA STEMI guidelines contain a Class IIb recommendation for low level exercise stress testing to guide post-discharge exercise prescription. In this case, due to significant debility from a prolonged ICU course, he was unable to participate in exercise testing, so this was deferred.

The STEMI guidelines do support the predictive value of post-myocardial infarction (MI) pharmacologic stress imaging for risk stratification of residual coronary lesions.5 The lack of hemodynamically significant obstruction from the LM thrombus was encouraging.

After requiring acute rehabilitation due to severe deconditioning, the patient eventually completed a steady state cardiac rehab program, as recommended by post-myocardial infarction guidelines.5 High intensity interval training (HIIT) cardiac rehab has demonstrated objective benefits (particularly increases in peak VO2) for patients with cardiovascular disease and a favorable safety profile in numerous studies and meta-analyses,6,7 and may be an attractive option for athletes who are enthusiastic to return to higher levels of fitness and activity. However, it may be discouraged in this situation, since the patient was <6 months from his myocarditis episode, with an intervening event, and had residual LV systolic dysfunction and LGE (though this was largely due to MI).1,2

Implantable cardioverter-defibrillator (ICD) placement for secondary prevention had been considered during the patient's hospitalization but deferred. The cause of the arrest was felt to be known and reversed and his LVEF was >35% and was improving, with viability demonstrated by CMR. The VEST trial8 failed to show a mortality benefit in patients utilizing wearable cardioverter-defibrillators, thus was also deferred.

Three months after discharge, despite maximally tolerated medical therapy, an echocardiogram showed the EF had decreased to 30%. A decision was made to place a subcutaneous ICD. He gradually resumed high-intensity activities, including hiking and cross-country skiing, until AND THEN... to be continued in Part II.

YOU ARE HERE: Home > Education and Meetings > A Recreational Athlete with Sudden Cardiac Arrest and Coronary Artery Disease: Part I