A 29-year-old prior collegiate basketball player and recreationally athletic male developed myocarditis and 3 months later suffered a cardiac arrest secondary to a ST elevation myocardial infarction, with thrombus identified in the left anterior descending and left main coronary arteries as described in Part I of this case. In brief, he had a complicated course requiring extracorporeal membrane oxygenation and repeat catheterizations showing residual thrombus. Attempts at mechanical thrombectomy and aspiration were incompletely successful, and additional stenting to overlap the thrombus was deemed to be high risk. Cardiac magnetic resonance imaging demonstrated subendocardial late gadolinium enhancement (25-50% wall thickness) along the basal to distal anterior, anteroseptal, and apical segments. He developed a right bundle branch block (RBBB) with a QRS duration of 160 msec. He underwent subcutaneous implantable cardioverter defibrillator (S-ICD) implantation for secondary prevention, began reverse-remodeling medical therapy with a beta-blocker and an angiotensin II receptor blocker, and completed a steady state cardiac rehabilitation program.

After recovering from the S-ICD placement, he steadily increased his physical activity. At a follow-up appointment he reported that he had done a 50-mile bike ride in 3.5 hours without any chest pain, excessive dyspnea, or lightheadedness. He resumed yoga and recreational swimming. Two months later, he restarted cross country skiing for 2-3 hours at a time.

Four months after S-ICD placement, he suffered syncope while surfing in cold waters. He was taken to his local cardiac hospital where device interrogation (Figure 1) revealed that a shock had been appropriately delivered for an episode of ventricular fibrillation (VF). Given his history, repeat coronary angiography was performed, revealing a patent stent without any residual thrombus. His electrophysiology team recommended a patch monitor and a cardiopulmonary exercise test to help guide therapy. The patch monitor demonstrated rare (<1%) premature ventricular contractions (PVCs). Prior to his scheduled stress test, the patient suffered a second VF arrest while running. He was appropriately rescued with a single shock from his ICD. 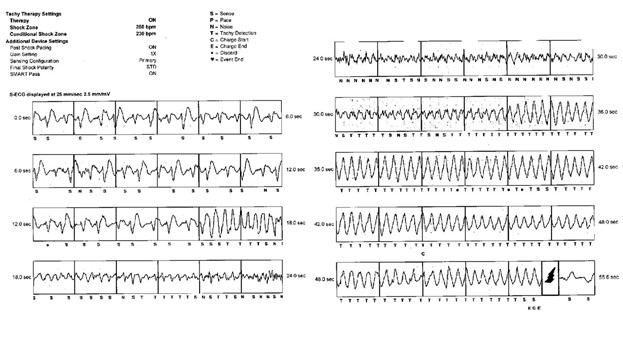 The stress test was performed a few days later. The patient exercised into stage 5 (12:20) of a Bruce protocol and to a heart rate of 134 bpm (71% of maximum predicted) but the test was halted due to the development of frequent monomorphic PVCs; however, the respiratory exchange ratio (RER) (1.10) indicated a near maximal effort, with peak VO2 37 mL/kg/min (84% predicted). The PVC morphology was consistent with an exit at the inferomedial papillary muscle or along the inferoapical border zone of his infarct (Figure 1). The mechanism driving the PVCs was thought to be related to automaticity or scar reentry. Ischemia can enhance Purkinje fiber automaticity and the papillary muscles are heavily innervated by these fibers. Scar reentry along the inferoapical infarct border zone could also explain these findings.

What therapy would you recommend for the recurrent ventricular arrhythmias?

The correct answer is: A. Start sotalol

In patients with ischemic heart disease and recurrent ventricular arrhythmias despite beta-blocker therapy, treatment with sotalol or amiodarone is a class IB indication.1 Although amiodarone is a more effective antiarrhythmic than sotalol, its long-term adverse profile makes it a poor initial choice in a young patient. Mexiletine, quinidine, and ranolazine could also be considered although data are more limited.

Sympathetic activation is generally proarrhythmic in patients with ventricular tachycardia (VT)/VF. Autonomic modulation with left/bilateral sympathectomy has been proven in Long QT syndrome and catecholaminergic polymorphic ventricular tachycardia, although data regarding its use in other cardiac conditions remain sparse. Cardiac sympathetic denervation is a reasonable option after failure of medical therapy or ablation.2

PVC ablation is reasonable to consider after failure of medical therapy or even as a first-line option in many cases. However, in this particular case, ablation of rare PVCs triggering VF would likely prove challenging for several reasons. First, ablation of rare PVCs can be limited by the lack of PVCs to map. In addition, these PVCs may become incessant during a procedure as a result of provocation (i.e. with isoproterenol) and lead to a VF storm. Lastly, the triggering PVC in this case is likely to be located near the left posterior fascicle. In this particular patient with a bundle branch block, ablation in this region would increase the risk of developing complete heart block.

For these reasons, an initial trial of sotalol seemed most reasonable. If this failed, then further attempts at medical therapy would likely have been attempted prior to PVC ablation followed by cardiac sympathectomy.

YOU ARE HERE: Home > Education and Meetings > A Recreational Athlete with Sudden Cardiac Arrest and Coronary Artery Disease: Part II