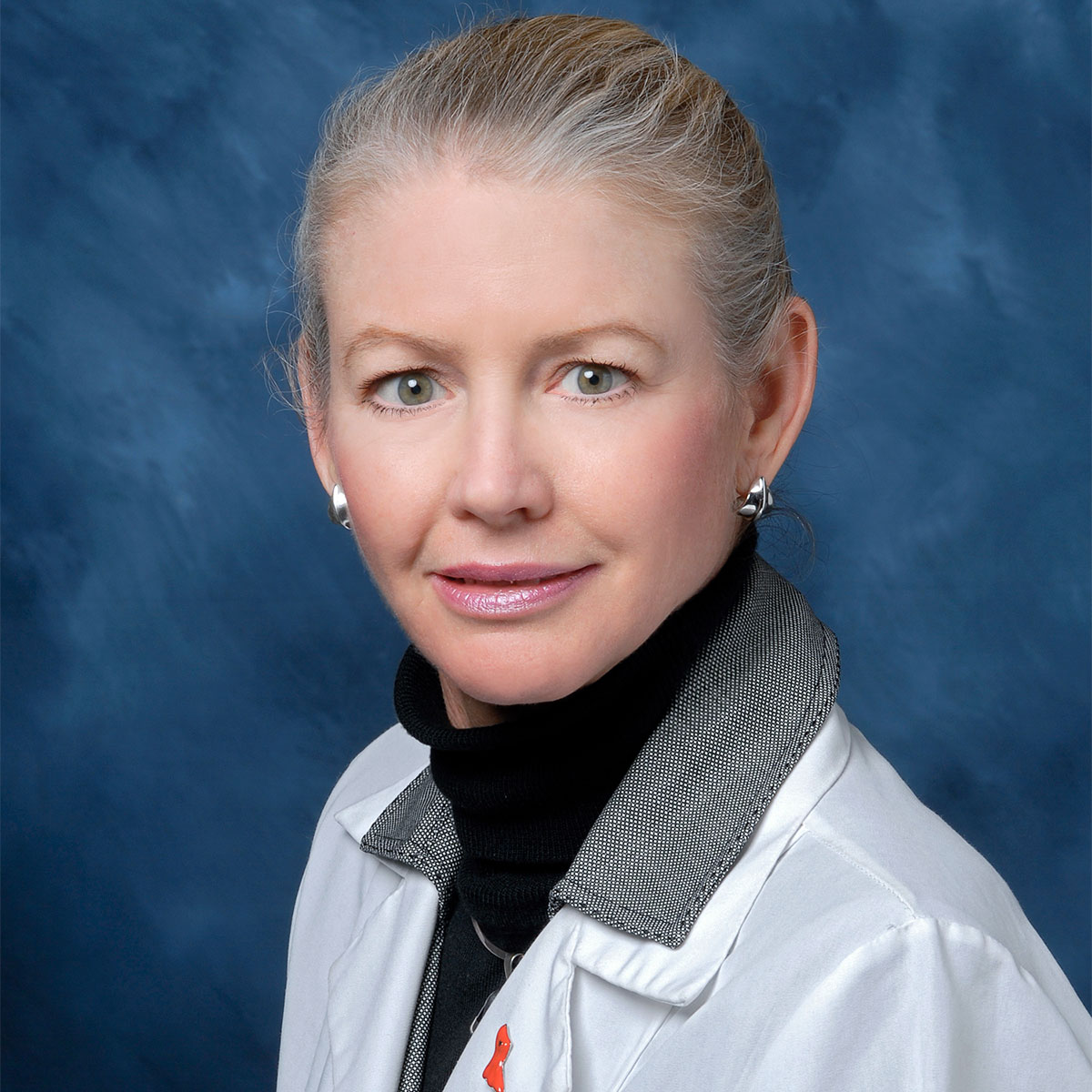 After an acute coronary syndrome, they are less likely to be prescribed guideline-directed medical therapy (GDMT), less likely to receive treatment in a timely fashion, and less likely to undergo revascularization. Women have higher rates of heart failure (HF) and are twice as likely to develop HF with preserved ejection fraction, a disease for which there are still no proven therapies.

Women also need more help with prevention: among other issues, they are less likely to get an adequate amount of physical activity, more likely to be obese, and less likely to quit smoking compared with men.

Greater awareness of these disparities is a critical first step to improving cardiovascular outcomes for women (infographic, below). The next step to closing the outcomes gap between women and men revolves around better research, greater engagement of women in the profession of cardiology, and utilization of GDMT and other evidence-based treatments.

Cardiology talked with C. Noel Bairey Merz, MD, FACC, a leading expert in women's heart health, about the contributors to this disparity in care and how it can be addressed by the cardiovascular community. Merz is the director of the Barbra Streisand Women's Heart Center and the Preventive Cardiac Center and professor of medicine at Cedars-Sinai Medical Center in Los Angeles, CA.

Why are the treatment differences between women and men so persistent? There are now sufficient data to support this clear-cut disparity. 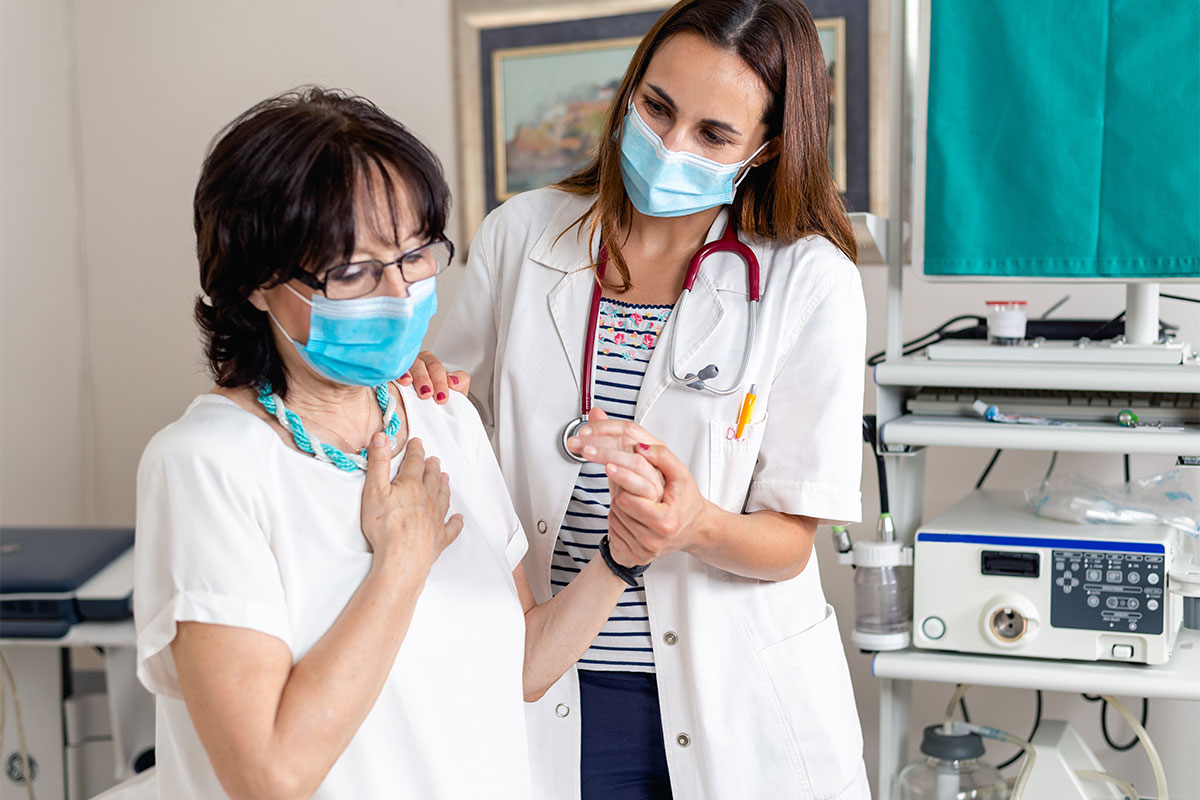 Bairey Merz: To every big problem, there's a simple answer that's usually wrong. It's probably overly optimistic to say there's one thing we can do to close the well-known gaps in the care of women with cardiovascular diseases.

Women can present differently than men with certain heart conditions. We have evidence to support this as an important contributor to the disparity in care. It starts with the training from medical school onward, where cardiologists are generally taught the male-pattern of heart disease, like for HF or myocardial infarction (MI).

Would you anticipate a similar performance from a female and a male cardiologist?

Bairey Merz: That's an interesting question. There are data to suggest that female emergency room physicians are better at recognizing, for example, female-pattern MIs. But they weren't trained to be cardiologists.

What is needed to close these gaps and which of these areas is of the most concern to you?

Bairey Merz: In rank order, coronary heart disease (CHD), HF and AFib, in terms of number of deaths and prevalence and incidence. 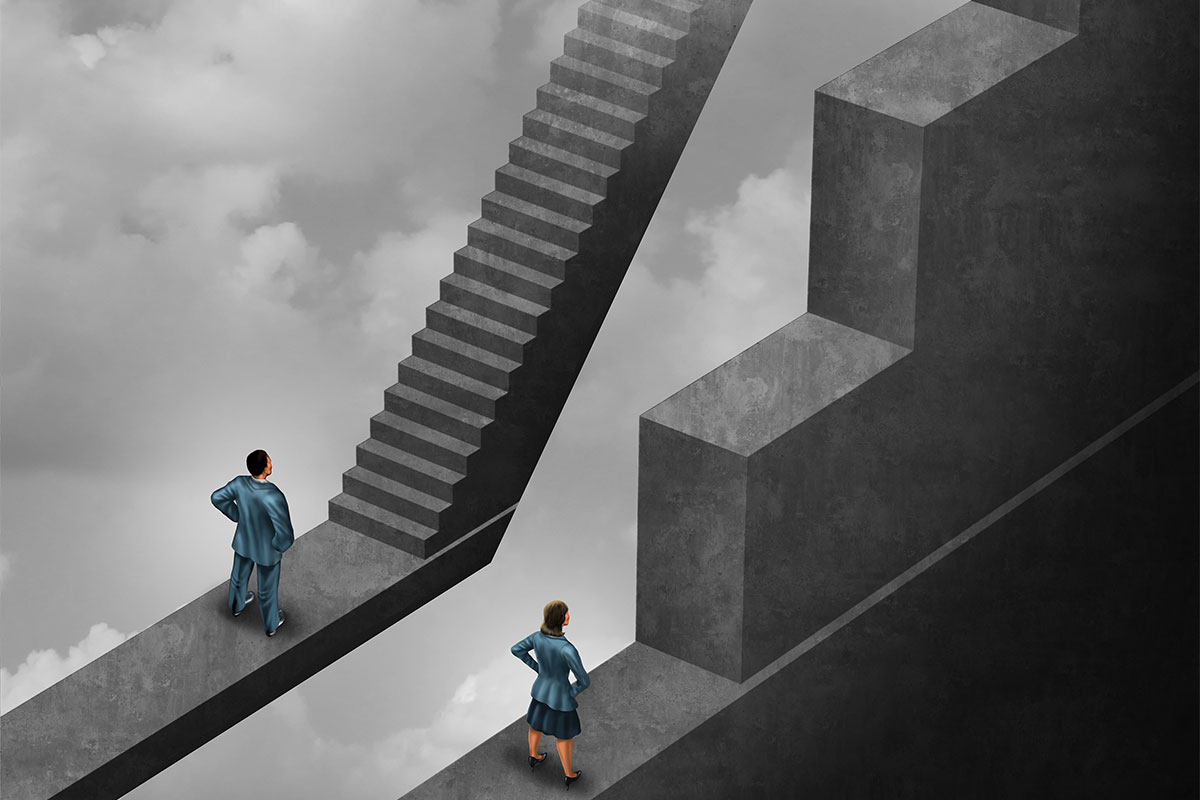 Let's think about just female-pattern CHD. A woman with chest pain and a man with general pain are referred to the cardiologist, who dutifully does some stress testing or a CT angio. The man is diagnosed with obstructive coronary disease, but the woman is not. She's dubbed a complainer and he has angina.

We've progressed from 25 years ago, when there was a big gap in stress testing for women compared with men with chest pain. The use of diagnostic testing is now fairly equal and physicians have absorbed the message that women die of heart disease too. But, what remains is the problem of missing the female-pattern heart disease.

This lack of recognition – which I think accounts for probably half of the disparities we see – of differing patterns of disease is true in CHD. It's also definitely true in HF, where women are more likely to have preserved ejection fraction and men reduced ejection fraction.

The problem goes beyond the clinic – and includes how we conduct our research. One analogy I've used is men are blue fish and women are red fish. If you say for a clinical registry or a clinical trial, you're going to enroll people who had a positive angiogram or have angina measured by a specific scale, then mostly blue fish (men) will be enrolled.

A few women will have a presentation like men and these metrics will not exclude them from the registry or trial. Nonetheless, the registry or trial has an inherent bias because of the inclusion criteria. This means the trial – hence treatment – is not representative of the red fish (women).

Why don't funders of studies insist on an equal number of women and men? 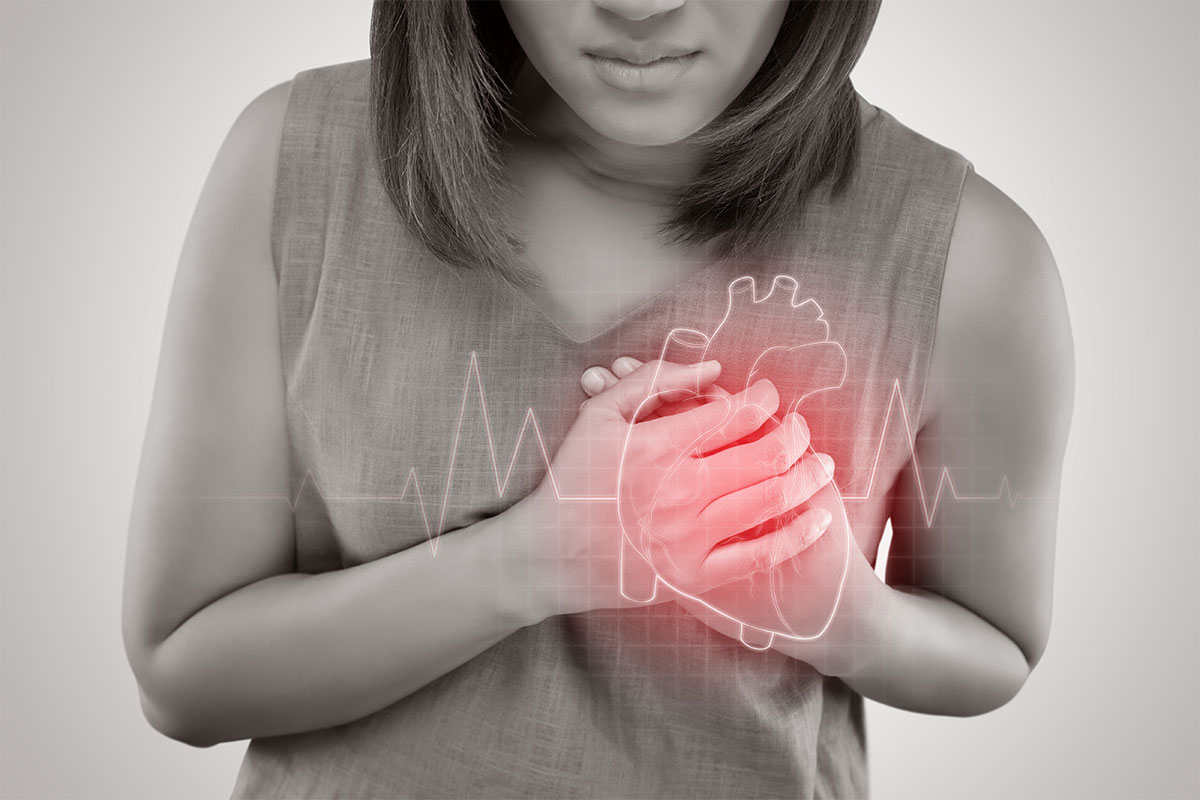 Bairey Merz: It is and it isn't. When Bernadine P. Healy, MD, FACC, was director of the National Institutes of Health (NIH) in the early 1990s she launched the Women's Health Initiative and she secured a congressional mandate that NIH would fund only clinical trials including both women and men if the condition affected both sexes.

Now about 30% of participants in clinical trials of heart disease are women.

The problem is we're stuck at 30%. There are a number of reasons – that are not evidence based – used to exclude women from enrollment and they continue to be underrepresented. This will continue until trials are designed to specifically include female-pattern disease.

The ISCHEMIA trial is an example of this dynamic in action. Of our over 500,000 CHD deaths every year, about half are women and half are men. So why were only 30% of the ISCHEMIA participants women? Because enrollment required a coronary angiogram showing obstructive disease. Women more often have nonobstructive disease. Women still die from their heart disease. But the ISCHEMIA trial tested an intervention that addresses only the male-pattern of heart disease.

We struggled to get the WARRIOR trial funded, which is much smaller and less expensive than ISCHEMIA. It is testing in a randomized controlled fashion intensive vs. usual care in just over 4,400 symptomatic women with signs or symptoms of ischemia but no obstructive disease. There's still a sense in the field that nonobstructive disease is a new entity. In truth, it's not. We simply haven't managed to change people's minds and integrate what we know into broad practice yet.

Do we need separate guidelines for women?

Bairey Merz: I'm not sure and this isn't something I've championed. Pediatricians lobbied for decades that children were not small adults, therefore the specialty of pediatrics was formed. Are women sufficiently different from men to require a separate discipline? That's a scientific question. I think we can agree women are not just small men. Then there is a feasibility question. How would we staff that? Already there aren't enough cardiologists.

Training and testing may be the best avenues to address this. Women's heart health is now included in medical exam boards, as well as the internal medicine and subspecialty boards. This is due to input from different organizations, including the ACC. Inclusion of test questions on these exams will require that women's heart health is part of the curriculum.

So, what's the answer? What technique do you recommend to help cardiologists better "mind the gap" and stop making these unforced errors?

Bairey Merz: First of all, follow the guidelines! I'm an advocate for guidelines, because we can narrow these health disparities if we're simply better at following the guidelines. Let's take the acute MI guideline as an example.

Every person – woman or man – who is diagnosed with an AMI leaves the hospital with the same medications prescribed: low-dose aspirin, statin, beta-blocker and, if indicated, an ACE inhibitor. Just follow the guidelines and shoot to hit the quality metrics and we're halfway there. 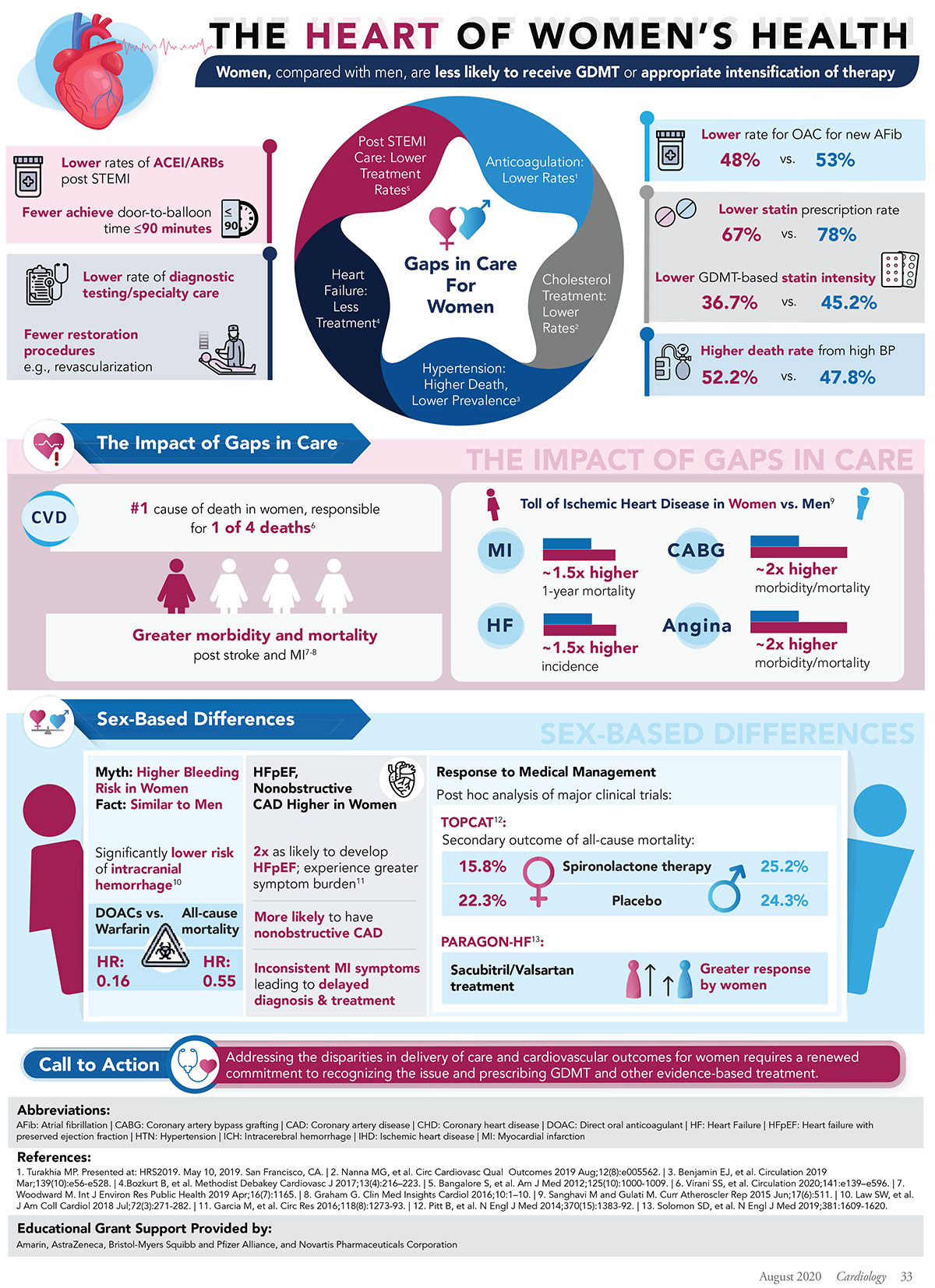 Click the image above to download a print-quality PDF of this graphic. Learn more on the disparities in care of women's heart health by visiting www.acc.org/spotlightwomenshealth.

YOU ARE HERE: Home > Latest in Cardiology > Feature | Cardiovascular Care of Women: Understanding the Disparities