Simon Dack Keynote: Don’t Let a Tragedy Dictate Who You Are At age 19, Roberto Canessa, MD, endured a plane crash in the Andes Mountains that killed 29 people and inspired the movie Alive. Over 72 days he had to eat human flesh to survive, was buried in an avalanche and hiked for 10 days through snow-covered mountains to get help for the other survivors. Over the last 46 years, he has not let that tragedy define his life.

Today, Canessa is a pediatric cardiologist who focuses on the treatment of newborns in Montevideo, Uruguay. When he presents the 2019 Simon Dack Keynote, Canessa will deliver a message about the importance of hope, endurance and the spirit of cooperation in pursuit of a fulfilling life. "I was desperate to go back to my everyday life. I didn't want to be a movie star or someone who was well known. I wanted to go back to what I fought for," Canessa says of his reaction to surviving the plane crash. "We survived because we were a team. We took chances and we worked together for the same objective."

The plane crash is just one of the forces that has driven Canessa's life. His ancestors emigrated from Italy to Uruguay and became physicians. Following medical school, he worked with his cardiologist father to implant the first stents in patients in his country. Eventually, he became involved in fetal cardiology and has traveled the world – including North America, Europe and Australia – to expand his knowledge of cardiology. He has raised money for the training of more physicians in South America, a goal he still pursues.

The 2019 Simon Dack Keynote, will take place today during the Opening Showcase Session from 8 – 9 a.m. today in the Main Tent (Great Hall).

Also don't miss "A Conversation with Dr. Roberto Canessa" today at 10:15 a.m. at the Heart 2 Heart Stage in the Lounge & Learn Pavilion.

Still, the plane crash is more than just part of Canessa's back story. Since 1972, he has written the book I Had to Survive, delivered lectures and been interviewed dozens of times about the experience.

"I will use video to show what happened," Canessa says of his lecture. "I will explain the decisions we made, the teamwork needed to achieve the results and how your soul gets to a thought. There are a lot of philosophical and religious feelings about the experience. I do not want to say what is good or bad. This is what happened to me. I was like a guinea pig there and these were my experiences."

"I am a regular person who faced troubling circumstances and was lucky enough to get an incredible result. We were not mountain climbers. We were average persons in a situation that could happen to anyone in the audience." Before the crash, Canessa was a medical student and a player on a rugby team that was flying to Argentina for an international tournament. After the crash, he tried to remain the same person by continuing his medical education and marrying the girl he met as a teenager.

"Every day I look in the mirror and thank God I am the same silly person I always was," he says. "We get more from life than we need and we do less than we can. Don't wait for your airplane to crash to realize how many good things you have for yourself and that you are not enjoying them. Don't wait for a helicopter to rescue you. We had to walk to search for help and tell them where our friends were stranded in the mountains."

During the keynote, Canessa will talk about these experiences and accomplishments. 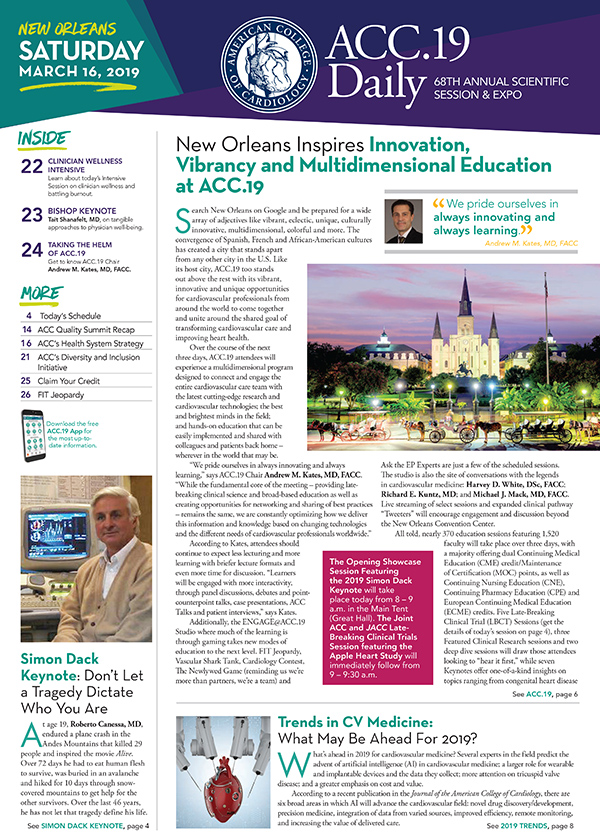 Simon Dack Keynote: Don't Let a Tragedy Dictate Who You Are

Trends in CV Medicine: What May Be Ahead For 2019?

FIT Jeopardy: The Classic Game Show With an FIT Twist

YOU ARE HERE: Home > Latest in Cardiology > Simon Dack Keynote: Don’t Let a Tragedy Dictate Who You Are