Cardiologists prescribing a diabetes drug? The concept seemed farfetched to me. Yet, somehow over the years, the paradigm for cardiovascular risk reduction has shifted more and more to embracing the concept of treating the patient, not the disease.

I got to the room early to get a seat in the front. Much to my surprise, even 25 minutes before the session started, the room was already about half full. Apparently, other attendees at ACC.19 were also yearning to learn more about the two new classes of drugs driving this transition – sodium glucose co-transporter-2 inhibitors (SGLT-2i) and glucagon-like peptide-1 receptor agonists (GLP-1 RAs) – and the evolving landscape that lies ahead.

It wasn't long before there were nearly no empty seats and people standing in the back. The session was designed to bridge the knowledge gap that prevents cardiologists from prescribing diabetes drugs – despite knowing cardiovascular outcomes are improved. Cardiovascular disease remains the leading cause of morbidity and mortality in patients with type 2 diabetes (T2D).

The prevalence of diabetes continues to grow. Intensive glucose control improves microvascular outcomes, but it doesn't seem to have the same demonstrable benefit on cardiovascular outcomes. Metformin and lifestyle changes are recommended as first-line interventions in T2D.

Until recently, we'd hit a wall with risk reduction in diabetes. But now, SGLT-2i and GLP-1 RAs have been shown to reduce cardiovascular events by mechanisms independent of glucose-lowering effects. This has led to a paradigm shift – from the traditional strategy of targeting glucose control to a more comprehensive overall cardiovascular risk reduction strategy in T2D.

…the paradigm for cardiovascular risk reduction has shifted more and more to embracing the concept of treating the patient, not the disease. We're no longer considered "internists," "cardiologists" or "endocrinologists." Instead, we've become true "physicians," crossing interdisciplinary lines and blurring boundaries between diseases.

What I found most "delicious" was the pun by the panel on finding the "sweet spot" between straddling cardiovascular and diabetes care, with an emphasis on a role for cardiovascular disease specialists in the co-management of patients with T2D.

While listening to the speakers, I couldn't help but think about the rapid rise to stardom of the SGLT-2i and GLP-1 RAs. Originally designed as classes of adjunctive diabetes drugs meant to reduce blood sugar in adults with T2D, they'd somehow made their way onto the ever-so-competitive scene of drugs that improve cardiovascular outcomes. The first SGLT-2i was a naturally occurring compound derived from apple tree bark, called phlorizin. However, this was very poorly tolerated with significant gastrointestinal side effects and poor oral bioavailability. Technology evolved over time and the tolerability and pharmacology of the drug favored its use.

The cardiovascular benefits are thought to be a result of the diuretic, natriuretic, blood pressure lowering and weight loss effects. There may also be favorable effects on the sympathetic nervous system, myocardial metabolism and cardiac remodeling.

Drugs in the SGLT-2i class include canagliflozin, dapagliflozin and empagliflozin, each administered orally. They can be used as monotherapy agents or in combination with other diabetes medicines, such as metformin, after benefit was demonstrated by large cardiovascular outcomes trials comparing the drug against placebo (Table 1).

SGLT-2i have shown efficacy – with significant reductions in hospitalizations for heart failure and progression of kidney disease. Modest effects also have been shown on major adverse cardiovascular events (MACE), including nonfatal myocardial infarction (MI), cardiovascular disease and stroke. Empagliflozin has been shown to significantly reduce cardiovascular and all-cause mortality. All of this benefit with SGLT-2i comes at the cost of an increase in genital mycotic infections. And in patients with severe peripheral arterial disease, a possible increase in risk of amputations, as observed with canagliflozin. The increased risk of amputations does not appear to be a class effect, as it was not seen with other SGLT-2i and the U.S. Food and Drug Administration (FDA) black box warning specifically addresses only canagliflozin.

In patients on diuretics, SGLT-2i can also increase the risk of volume depletion/hypotension. Per the FDA label, SGLT-2i should be discontinued in the setting of acute kidney injury or renal impairment, and diuretic doses may also need to be adjusted when starting SGLT2i therapy.

As the speakers talked about adverse effects of these drugs including genital mycotic infections, I chuckled to myself realizing that more of us cardiologists would now have to become comfortable treating candidal vaginitis in women and balanitis in men and we could no longer continue to "stay above the diaphragm." The other important class of glucose-lowering drugs changing the paradigm for cardiovascular risk lowering in T2D is the GLP-1 RAs. In certain individuals with T2D, the physiologic response to an oral glucose load, as mediated by the incretin system, is reduced.

This results in less of a GLP-1 effect, with an impaired capacity to secrete insulin, thereby increasing insulin resistance with a further decrease and resistance in GLP-1 receptor expression and its downstream action. GLP-1 agonists stimulate the GLP-1 receptors, counteracting these effects – resulting in increased insulin secretion and sensitivity, increased satiety, decreased body weight and lower HbA1c.

The first GLP-1 RA (exenatide) was approved in the U.S. more than a decade ago. Since then, more agents have been approved, with varying durations of action:

Each agent is administered subcutaneously.

Of the six FDA-approved GLP-1 RAs, only liraglutide and semaglutide have been definitively demonstrated to reduce cardiovascular events. In cardiovascular outcome trials, the GLP-1 RAs vs. placebo have resulted in consistent and significant reductions in three-point MACE (Table 2).

Notably, however, unlike with the SGLT-2i, no effect on heart failure was found with the GLP-1 RAs.

... how do we get providers to embrace these therapies and should they be "owned" by cardiologists, primary care, endocrinologists or embraced by all, regardless of their specialty?

However, due to their effects on slowing gastric emptying, GLP-1 RAs can result in an increase in nausea/vomiting and are not preferred in diabetic patients with severe gastroparesis. Side effects can usually be mitigated by eating smaller meals or gradual dose escalation.

Concern has been raised about the possibility of pancreatitis or pancreatic cancer, but this was not confirmed in FDA findings. There is a possibility of increased risk of retinopathy (as seen with semaglutide in SUSTAIN-6) but this did not appear to be consistently noted in the FDA database with other drugs in this class.1 Routine eye exams are recommended.

Both classes of agents have nonglycemic benefits on systolic blood pressure and weight loss and have a low risk of hypoglycemia on their own or when used with metformin and other oral glucose-lowering medications (except for insulin secretagogues).

Three main challenges continue to face us in this space:

To address these challenges, the ACC has released an Expert Consensus Document to support decision-making by cardiovascular professionals. The 2018 Expert Consensus Decision Pathway on Novel Therapies for Cardiovascular Risk Reduction in Patients with Type 2 Diabetes and Atherosclerotic Cardiovascular Disease,2 endorsed by the American Diabetes Association and published in the Journal of the American College of Cardiology, identifies three key areas where cardiovascular professionals are uniquely positioned to assist with the management of T2D patients:

As we move into the next era of cardiovascular care, as suggested by the shifting paradigm of diabetes care, cardiovascular professionals are now realizing risk reduction is no longer only about risk factor optimization. It is becoming expected that we must instead invoke a comprehensive patient-centric approach with engagement of many different specialists across interdisciplinary lines. 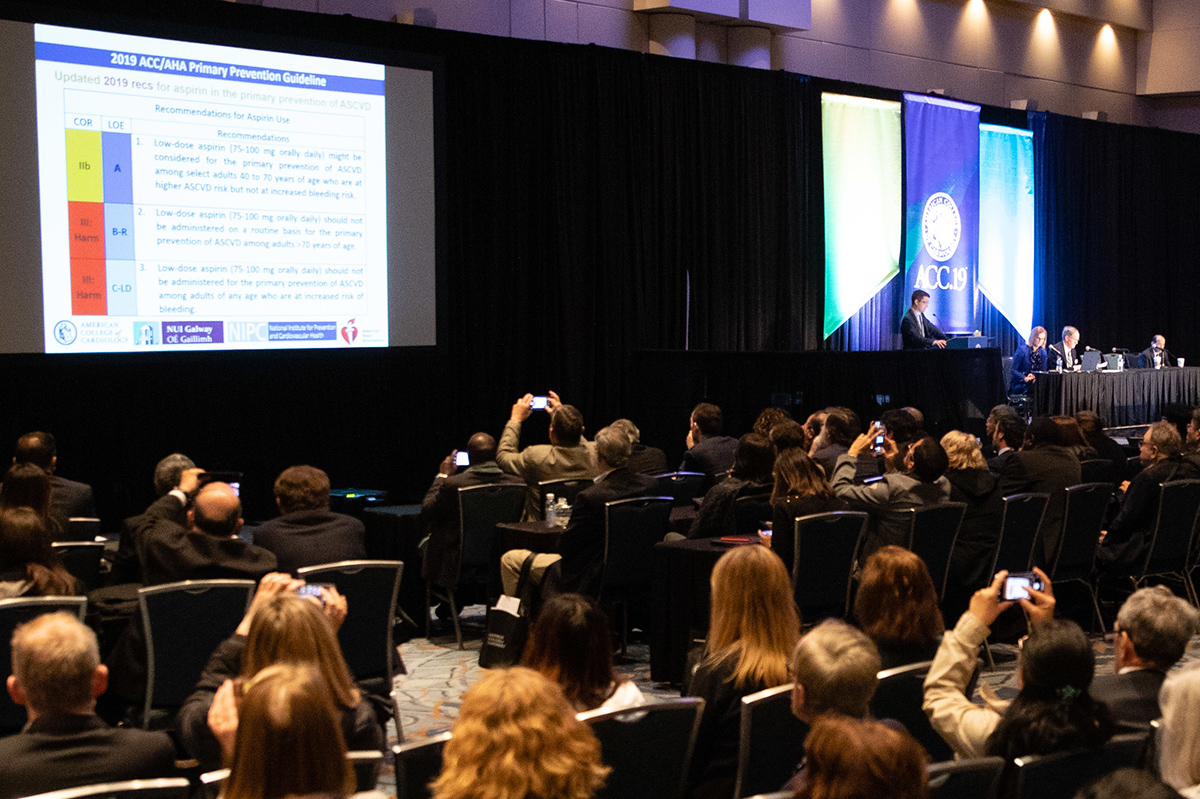 The 2019 ACC/AHA Guideline on the Primary Prevention of Cardiovascular Disease,3 released during ACC.19, has already embraced these recommendations, jumping in and now recommending either SGLT-2i or GLP-1 RAs as second-line therapy after metformin and lifestyle modifications in patients with T2D.

After the case presentations and discussion, the session left us all invigorated, ready to return to practice and start using these new medications in our patients with diabetes.

Armed with new knowledge about these novel agents, we also left with some unanswered questions, likely to be a topic of discussion at a future ACC Scientific Session, when the evidence becomes available from clinical trials. Resources at Your Fingertips

Walk on over – digitally – to the Succeed in Managing Cardiovascular Risk in Diabetes hub for clinician and patient education, tools and resources, including the new Type 2 Diabetes Cardiovascular Discussion Guide, a comprehensive toolkit to lead conversations with patients about heart-related benefits of SGLT-1 and GLP RAs along with six steps to improve their cardiovascular risk management. Visit ACC.org/CVRiD to learn more.

Tap into a video discussion about the key points of the Expert Consensus Document on cardiovascular risk reduction in diabetes between James L. Januzzi Jr., MD, FACC, and Brendan Everett, MD, FACC.

Earn CME/MOC and up your skills with the Lifting the Burden of CV Disease and Diabetes course. Learn about the interplay of therapies for both diseases; comorbidities and cardioprotective properties; tailoring treatments and educating patients; and guidelines and clinical trials. Click here to start learning and earning.

Keep the learning going with the ACC and Medscape: Cardiovascular Risk Reduction Center of Excellence, offering a range of educational and clinical content and tools with practical, actionable insights. Click here to learn more.