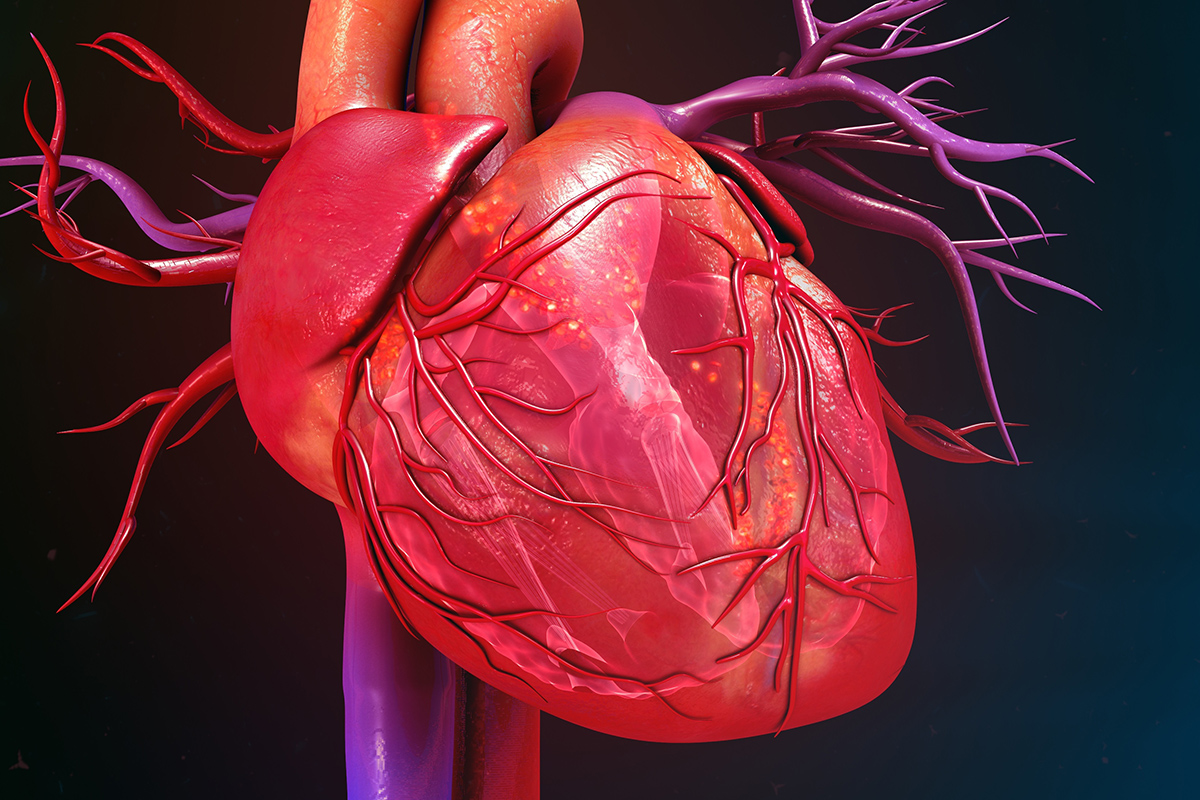 There are now multiple randomized trials supporting this treatment modality, demonstrating that it can reduce the frequency of VT episodes. The VANISH trial published, in 2016,1 demonstrated that catheter ablation was significantly more effective than antiarrhythmic drugs at reducing a composite endpoint of death, VT storm or ICD shocks.

However, VT ablation could be very challenging and complex. The success rate varies depending the nature of the disease and the substrate (ischemic vs. nonischemic). In general, trials have demonstrated that around 50 percent of patients treated with catheter ablation will remain free of VT for prolonged periods; most of the other half, while not achieving complete suppression, will see a marked reduction in the frequency of VT.

The complexity of catheter ablation for VT depends on the heterogeneous nature of the substrate. In the last few years, our understanding of the 3D spatial organization of the scar and its contribution to the VT has improved substantially.

In addition, the use of high-resolution mapping and the advances in cardiac imaging, incorporating cardiac magnetic resonance (CMR) with late gadolinium enhancement to our preprocedure evaluation, have allowed us to have a better understanding of the anatomy, substrate and mechanism of the VT.

Despite all these advances and technology, we still fail in treating some difficult substrates. This is usually because of the anatomy, and sometimes we just can't reach the circuit. This could be because its origin is intramural and can't be reached from either the endocardium or epicardium (Figure 1).

Figure 1: An example of a 63-year-old patient with nonischemic cardiomyopathy and systolic heart failure with very difficult intramural substrate. 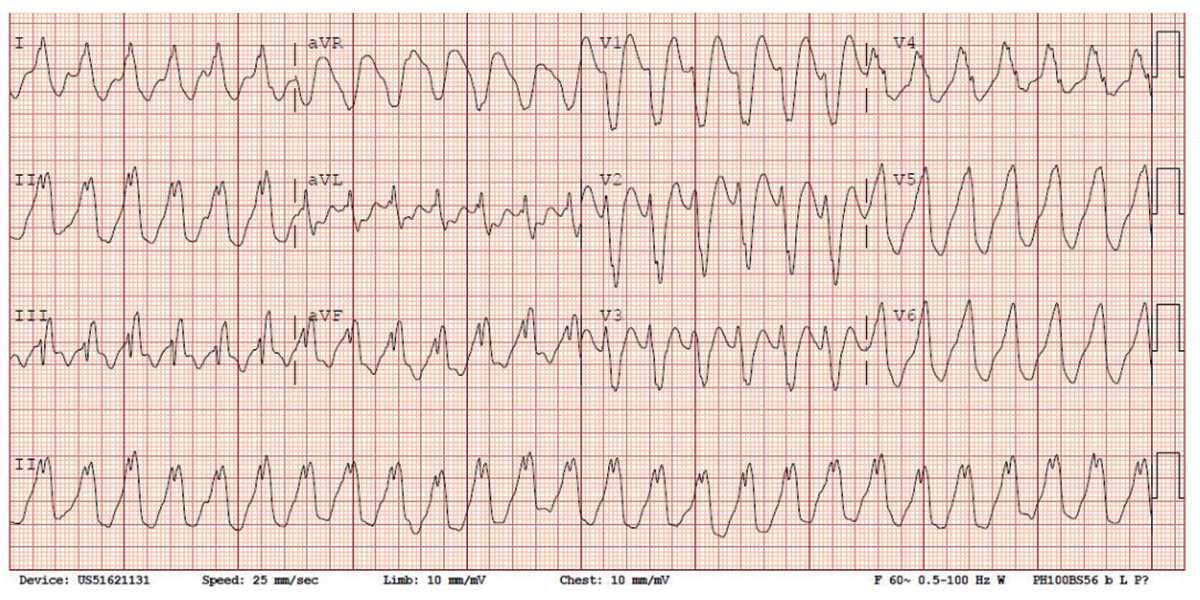 B) VT 2; note the similar LBBB morphology and precordial transition with inferior axis, with a positive deflection in III suggestive of a higher exit site.

C) CMRI showed mid-wall late gadolinium enhancement involving the basal and mid septum and basal anterior wall, which is consistent with a nonischemic pattern of enhancement. D) Bipolar LV map with no significant scar. E) Unipolar scar showing abnormal septal voltage, suggestive of a deeper substrate. F) RV-LV endocardial unipolar map demonstrating diffuse septal scar likely intramural. G) Pace maps showing best correlation all over the septum from both LV and RV. We performed ablation from both side of the septum with good results and noninducibility at end of study.

Approaches have been suggested such as: 1) needle ablation; 2) changing the osmotic concentration of the solution to half normal saline to allow deeper penetration; 3) bipolar ablation for septal intramural origins; and recently 4) the use of noninvasive stereotactic radioablation – the focus of this article.

The idea of performing a noninvasive VT ablation is highly attractive, especially for high-risk patients with increased risk of complications with any invasive procedure approach.

The feasibility of noninvasive stereotactic radioablation was reported in a paper published in the New England Journal of Medicine.2 The technique involves the identification of the arrhythmogenic scar regions by combining anatomical imaging (mainly CMR) with noninvasive electrocardiographic imaging during VT that is induced by means of an ICD. Once the target region is identified, radiation is planned.

This initial feasibility study only included five patients, but data were very impressive, generating a lot of interest in our field. For example, in patients who were treated with a single fraction of 25 Gy while awake, the mean noninvasive ablation time was 14 minutes – leading to an impressive reduction in VT burden of 99 percent from baseline after the blanking period. Although promising, the main concern was safety, because of the potential off-target ablation exposure of, for example, the coronary arteries, cardiac valves and lungs.

A total of 19 patients were enrolled in ENCORE VT, with remarkable results of VT burden reduction. The median number of VT episodes decreased from 119 in the six months before ablation to three in the six months after ablation.

ICD shocks and antitachycardia pacing therapies were also significantly reduced after ablation – from a median of four to zero ICD shocks and 81 to 3.5 pacings. For 2/19 patients treated for PVC-induced cardiomyopathy, PVC burden was reduced significantly as well.

The results of the ENCORE VT trial replicated and extended the previously reported case series results by this group: demonstrating feasibility, reproducibility and a reasonable safety profile, making this new therapeutic approach a very attractive one for high-risk patients with refractory VT.

The SBRT therapeutic approach is very similar to tumor radiotherapy, which has been well studied in radiation oncology for decades. SBRT is now widely used in oncology for different types of malignancies. Although it is a fast, noninvasive and attractive therapy, it is important to monitor for side effects from radiation to the target organ and adjacent tissues.

Several side effects were observed in the ENCORE VT trial, predominantly due to radiation-induced inflammation to the adjacent organs. This included pneumonitis, pericarditis and asymptomatic pericardial effusions. Most of these side effects were steroid responsive and gradually resolved during follow-up.

The results of this small prospective trial are very promising, and this new partnership between oncology and cardiac electrophysiology is here to stay. We anticipate that it will grow over time, creating a new era in the field of electrophysiology and this is just the beginning.

Now we need a larger prospective randomized trial to answer a range of questions. What is the optimal radiation dose for cardiac therapy? How do we minimize the volume exposed? What are approaches to specifically target the culprit areas? Are there different therapeutic algorithms and standardized protocols for both oncology and electrophysiology?

The future is very promising for electrophysiology. I can see my patient (in Figure 1) coming back for a 15-minute SBRT treatment while awake and walking back home the same day. No groin access or big sheaths. This will certainly impact the way we treat our patients and perhaps lead to more cost-effective treatment. 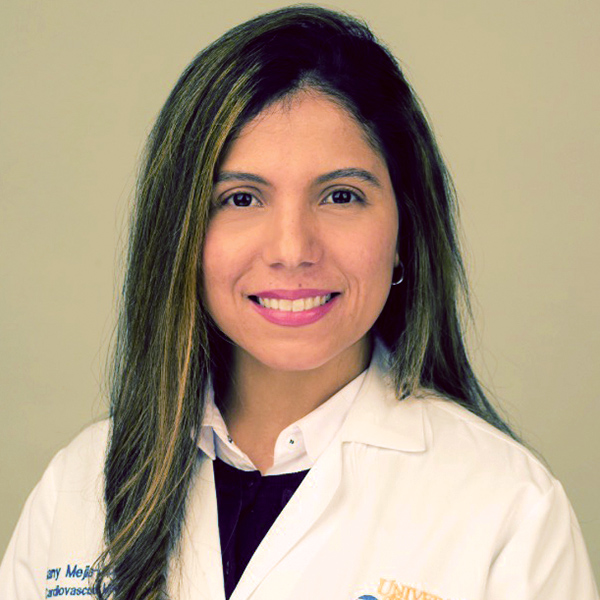 This article was authored by Eliany Mejía-López, MD, a fellow in training in the Cardiac Electrophysiology program at the University of Virginia Medical Center, Charlottesville, VA. Reach out to her on Twitter @MejiaEliany.

She thanks Andrew E. Darby, MD, and Rohit Malhotra, MD, FACC, who provided insights and expertise that greatly assisted the work and case reviewed here.

B) VT 2; note the similar LBBB morphology and precordial transition with inferior axis, with a positive deflection in III suggestive of a higher exit site.

C) CMRI showed mid-wall late gadolinium enhancement involving the basal and mid septum and basal anterior wall, which is consistent with a nonischemic pattern of enhancement. D) Bipolar LV map with no significant scar. E) Unipolar scar showing abnormal septal voltage, suggestive of a deeper substrate. F) RV-LV endocardial unipolar map demonstrating diffuse septal scar likely intramural. G) Pace maps showing best correlation all over the septum from both LV and RV. We performed ablation from both side of the septum with good results and noninducibility at end of study.

YOU ARE HERE: Home > Latest in Cardiology > Focus on EP | Noninvasive Ablation for Ventricular Arrhythmias