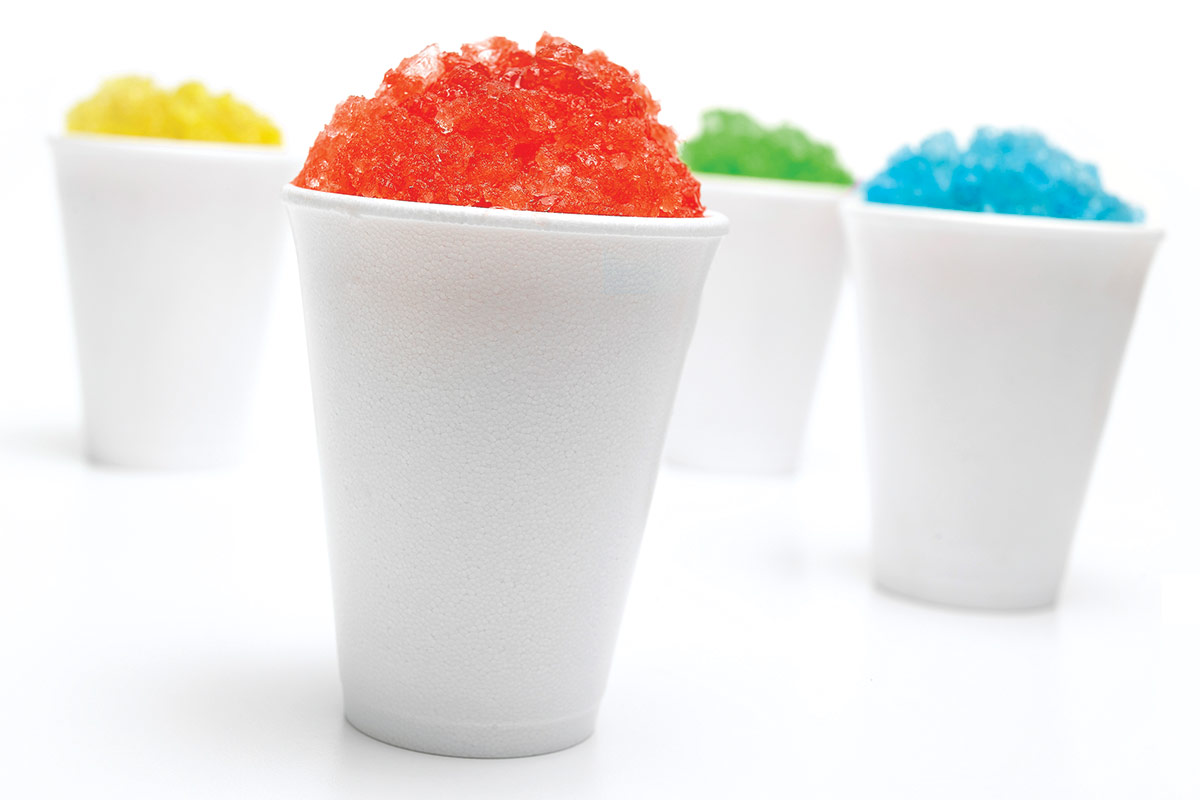 As a child I remember being taught by my Chinese parents that every ailment was the consequence of some lifestyle decision. If I sneezed or sniffled, it was because I wasn't wearing enough clothes to stay warm (even if it was summer in Florida). If I felt run down or tired, it was because I hadn't gotten a good night's sleep (not because I had a long day). If I had an upset stomach after a meal, it must have been because I ate too fast (not because the food was exotic or due to a potential allergy). Over time and especially after I became a physician, I came to realize that many of these Eastern-medicine type practices were likely superstitious and without much scientific merit. Needless to say, as an adult, I became more and more rebellious towards my parents "misfounded" lifestyle edicts.

Ironically, literature in the management of arrhythmias, particularly for atrial fibrillation (AFib), has begun to increasingly focus on the importance of lifestyle. In the 2019 AHA/ACC/HRS Focused Update on AFib management, weight loss reduction and lifestyle modifications to address obstructive sleep apnea (OSA), alcohol intake and tobacco use were given a class I recommendation.1 More recent studies on triggers for AFib have revealed that other lifestyle stressors including noise pollution and living environment may also be associated. In this piece, I explore several emerging lifestyle exposures that have been associated with AFib (much to the delight of my parents). 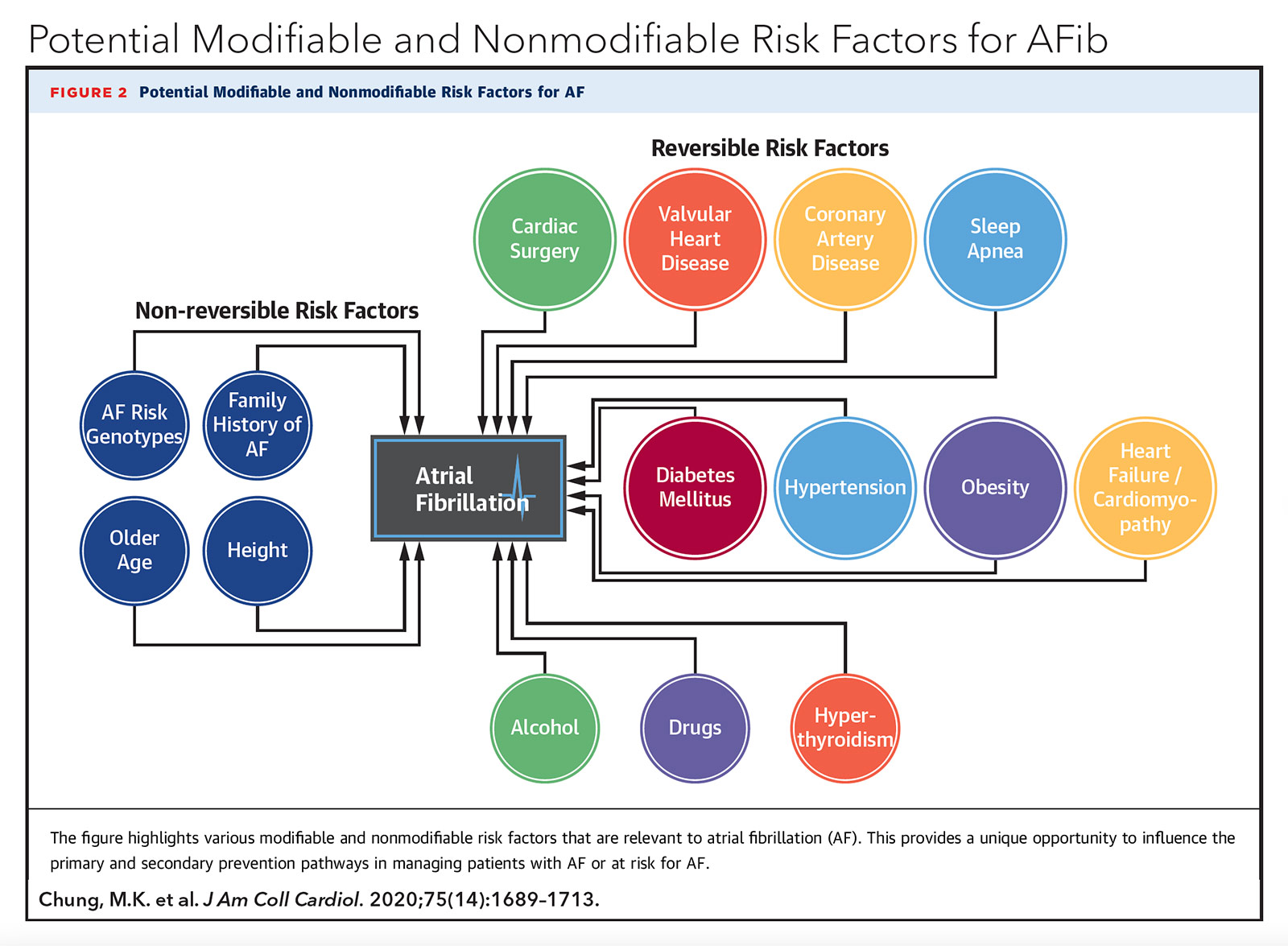 A 2019 study examined 501,690 adults without AFib and categorized their weekly physical activity as inactive (no leisure time physical activity), insufficiently active (1-500 MET-minutes/week), active (meeting the target recommendation of 500-1000 MET-minutes/ week) and highly active (>1000 MET-minutes/week).2 Diagnosis of AFib was determined by ECG. Over a median four years of follow-up, the incidence of AFib per 1,000 person-years across the four groups was 2.27, 1.52, 1.56 and 1.91 (in ascending physical activity level), resembling a U-shaped curve. The active group experienced a significant 12% reduction in AFib compared with the inactive group (hazard ratio [HR], 0.88; confidence interval [CI], 0.80-0.97), but this benefit was attenuated in the insufficiently active group (only 6% AFib reduction) and the highly active group (only 7% AFib reduction).

Taken altogether, these results suggest a moderate level of physical activity affords the greatest protection from developing AFib and deviations from moderation can be harmful.

While OSA is associated with incident AFib, the impact of other forms of impaired sleep quality on AFib remains poorly understood.

A 2018 study evaluated the impact of sleep characteristics on the development of AFib in 4,533 patients from the Health eHeart Study (online survey data), 5,201 patient from the Cardiovascular Heart Study (CHS, Medicare outcomes data), and 14,330,651 patients from the California Healthcare Cost and Utilization Project (HCUP; ambulatory outpatient, emergency room and inpatient data).4 In each cohort, multivariate analysis was performed to adjust for the presence of OSA. In the Health eHeart Study cohort, incident AFib was significantly associated with increased sleep latency (OR, 1.17; 95% CI, 1.03-1.32; p=0.01) and frequent nighttime awakenings, defined as >3 nighttime awakenings per week (OR, 1.47; 95% CI, 1.14-1.89; p<0.01). In the subset of patients from CHS who underwent a home sleep study, incident AFib was significantly associated with less REM sleep (HR, 1.18; 95% CI, 1.00-1.38; p=0.05). In the HCUP cohort, incident AFib was significantly associated with a diagnosis of insomnia (HR, 1.36, 95% CI, 1.30-1.42; p<0.001).

A more recent 2021 study further evaluated the development of AFib or atrial flutter in 403,187 adults without a history of arrhythmias who self-reported sleep behavior on chronotype (morning vs. evening person), sleep duration, insomnia, snoring and excessive daytime sleepiness.5 These five parameters were then used to categorize overall sleep patterns as healthy, intermediate or poor. Furthermore, all patients underwent genotyping to determine whether they had low, intermediate or high genetic predisposition to developing AFib. On multivariate analysis, protective sleep patterns against incident AFib included achieving seven to eight hours of sleep per night (HR, 0.92; 95% CI, 0.89-0.96; p<0.001), absence of insomnia (HR, 0.88; 95% CI, 0.84-0.92; p<0.001) and lack of frequent daytime sleepiness (HR, 0.81; 95% CI, 0.74-0.89; p<0.001).

Taken altogether, these studies suggest sleep quality and quantity have a significant impact on the development of AFib that is independent of a diagnosis of OSA. 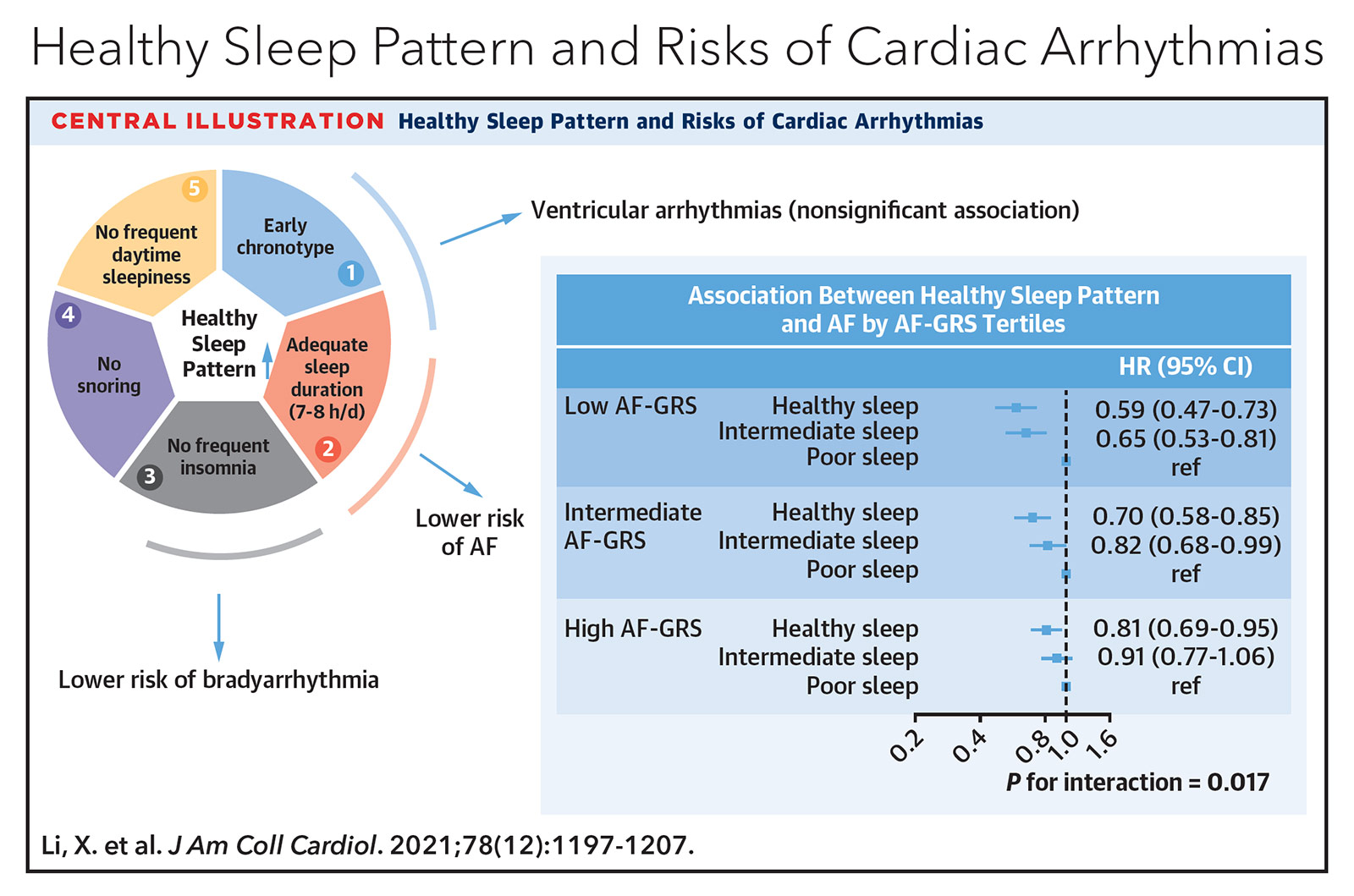 The type and pattern of food and beverage consumption are one of the most cited yet least understood triggers of AFib. In a recent survey of 2,246 patients with paroxysmal AFib from the Heart eHealth Study, more than half of the top 15 reported AFib triggers were associated with dietary exposures or gastrointestinal discomfort.6 Some triggers, such as alcohol and caffeine, have been thoroughly investigated in large studies whereas other triggers, such as certain foods, cold beverages and abnormal eating patterns, have yet to undergo thorough investigation.

Chocolate is a favorite food indulgence that has come under scrutiny as an AFib trigger. However, a 2017 study of 55,502 adults from the Danish Diet, Cancer, and Health Study found that chocolate consumption was inversely related to the risk of developing AFib.7 Compared with adults who consumed less than one serving of chocolate a month (approximately 1 ounce or 30 grams), those who consumed one to three servings a month had a lower AFib risk (HR, 0.90; 95% CI, 0.82-0.98) and those who consumed two to six servings a week had the lowest AFib risk (HR, 0.80; 95% CI, 0.71-0.91). The investigators theorized that certain ingredients in chocolate, such as cocoa, flavonoids and magnesium, may have antioxidant, anti-inflammatory and anti-arrhythmic properties.

Cold beverages are another frequently reported dietary AFib trigger. One case report described a 79-year-old father and his 42-year-old son, both without significant cardiac disease, who separately developed new onset, symptomatic AFib after rapidly ingesting a snowball (flavored shaved ice dessert).8 Both converted to sinus rhythm after treatment with anti-arrhythmic agents. Another case reported on a healthy 29-year-old who developed a brain freeze (headache) as well as symptomatic AFib after ingesting a slushy ice drink and subsequently required electrical cardioversion.9 A third case report detailed a healthy 35-year-old athlete who would routinely develop AFib-related palpitations after swallowing ice cold water after physical activity.10 He stopped swallowing ice-cold water and became free of palpitations over the next year of monitoring. These accumulating anecdotes of cold drink-induced AFib have now led to the aptly named condition known as "cold drink heart."11

In some instances, the dietary AFib trigger may not be what is eaten but when it is eaten. A 2014 study categorized 47,117 adults as late-night dinner eaters (those who ate dinner within two hours of bedtime at least three times per week), breakfast skippers (those who skipped breakfast at least three times per week), or both.12 After adjusting for other lifestyle habits and cardiovascular comorbidities, those who were both late-night dinner eaters and breakfast skippers were at nearly twofold risk of developing AFib (OR, 1.93; 95% CI, 1.23-3.04) compared with those who did not exhibit both behaviors. The authors theorized the AFib trigger may be related to untimely disruption in circulating blood and vagal tone related to gastrointestinal motility and metabolic function.

Now looking back perhaps my parents were right. Lifestyle still makes a difference, after all. 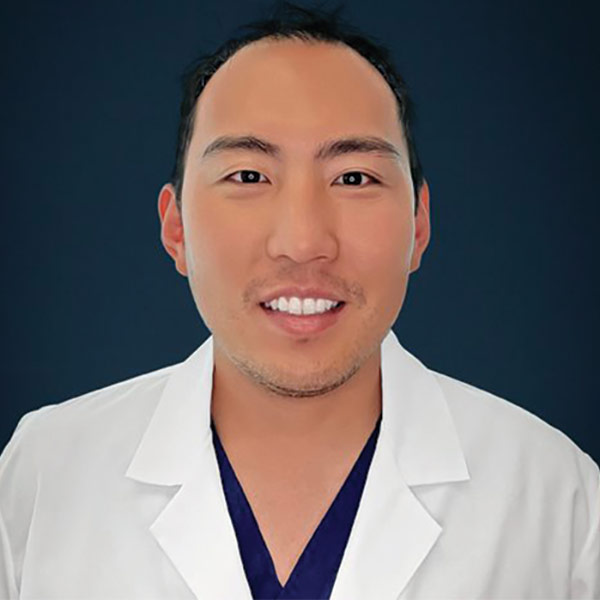 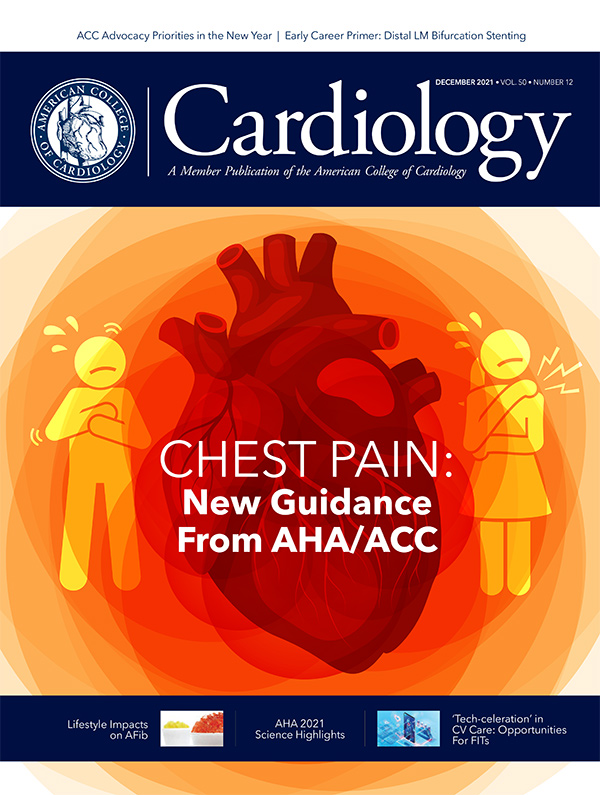 For the FITs | The Evolving Roles of Digital Health, Big Data and AI: "Tech-celeration" in CV Care

YOU ARE HERE: Home > Latest in Cardiology > Focus on EP | The Impact of Lifestyle on Atrial Fibrillation