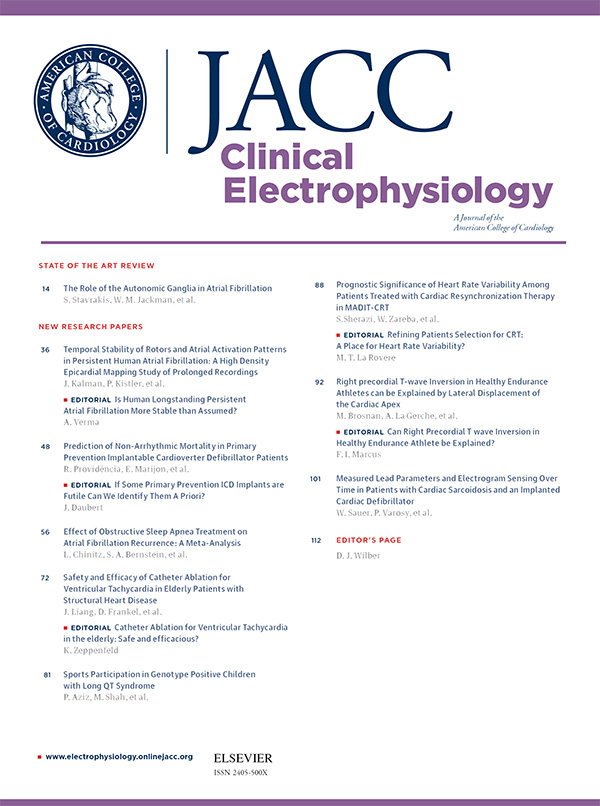 New research on the treatment of arrhythmias, including ablation techniques, novel catheters, mapping methods and more published May 7 in the Journal of the American College of Cardiology (JACC) and JACC: Clinical Electrophysiology, and were presented at the Heart Rhythm Scientific Sessions in San Francisco.

The majority of Medicare beneficiaries undergoing ablation for atrial fibrillation (AFib) do so at hospitals with on-site cardiothoracic (CT) surgery, according to a JACC research paper.

No significant association was seen between presence or absence of on-site CT surgery and cardiac perforation, CT surgery, rehospitalization or death.

Ablation guided by the Stochastic Trajectory of Ranked Signals (STAR) mapping method produced a favorable outcome in patients with AFib and the ablation response at early sites of activation (ESA) suggests they may be drivers of AFib, according to a JACC: Clinical Electrophysiology study by Shohreh Honarbakhsh, MRCP, BSc, et al.

A total of 35 AFib patients were included. After pulmonary vein isolation (PVI), an average of 2.6 ESA were ablated per patient with ablation response achieved in all patients. ESA was identified on 73.8 percent of the 86 STAR maps created post PVI. ESA that resulted in AFib termination was more likely to be identified on both pre- and post-PVI maps vs. those associated with cycle length slowing (23/24 vs. 16/49; p<0.001).

During a follow-up of 18.5 months, 28 (80 percent) patients were free from atrial tachycardia or AFib. The researchers conclude these findings warrant testing in a randomized controlled trial.

In patients with suspected intramural septal VAs, mapping of the septal coronary veins may be helpful to characterize the arrhythmia substrate, identify ablation targets and guide endocardial ablation, according to a JACC: Clinical Electrophysiology study by David F. Briceño, MD, et al.

A novel catheter for very high power-short duration (vHPSD) ablation was shown to be clinically feasible and safe for the treatment of paroxysmal AFib, according to a first-in-human JACC: Clinical Electrophysiology study by Vivek Y. Reddy, MD, et al.

A total of 52 patients underwent ablation. PVI was achieved in all patients using the study catheter alone, with total procedure and fluoroscopy times of 105.2 and 6.6 minutes, respectively. Most patients were in sinus rhythm at three months.

There were no deaths, stroke, atrioesophageal fistula, pulmonary vein stenosis, or unanticipated adverse device effects. Larger trials are ongoing to confirm safety and long-term effectiveness of this strategy.

In a comparison of eight prognostic scores, the Seattle Heart Failure Model (SHFM) and PAINESD risk scores were the most accurate in predicting recurrent ventricular tachycardia (VT) and death or transplant in patients with nonischemic dilated cardiomyopathy (NIDM) and VT undergoing catheter ablation, according to a JACC: Clinical Electrophysiology study by Daniele Muser, MD, et al.

The basal inferoseptal left ventricular (BIS-LVe) region is an uncommon but increasingly recognized site of origin of idiopathic ventricular arrhythmias (VAs), and it is important to distinguish the BIS-LVe region from the inferobasal crux (IBC) for procedural planning and ablation success, according to a JACC: Clinical Electrophysiology study from Jackson J. Liang, DO, et al.

Pulsed field ablation (PFA) rapidly and efficiently isolated pulmonary veins "with a degree of tissue selectivity and a safety profile heretofore not described for cardiac ablation," said researchers presenting findings at HRS 2019. The study, simultaneously published in the Journal of the American College of Cardiology, also suggests PFA can achieve a high degree of durable pulmonary vein isolation (PVI).

Results found that durability at three months improved with successive waveform refinement from 18 percent to 100 percent of patients with all PVs isolated. Researchers noted that with the exception of one procedure-related pericardial tamponade, there were no additional primary adverse events over 120-days median follow-up, including: stroke, phrenic nerve injury, PV stenosis and esophageal injury.

"PFA preferentially affected myocardial tissue, allowing facile ultra-rapid pulmonary vein isolation with excellent durability and chronic safety," said Reddy and colleagues. "Although this is only a two-center study of a relatively modest number of patients, the major safety and efficacy issues relevant to PFA have been addressed. It would be appropriate to now commence a larger multicenter study of PFA – preferably in comparison to standard thermal ablation."

A novel procedure in which permanent coils are implanted into both common carotid arteries (CCAs) to capture emboli >1.4 mm diameter was feasible and safe in a small cohort of patients with atrial fibrillation (AFib) at high risk of stroke. Findings from this first-in-human study were presented at HRS 2019 and simultaneously published in the Journal of the American College of Cardiology.

The CAPTURE study, conducted by Vivek Y. Reddy, MD, et al., assessed 25 patients with AFib who were unsuitable for oral anticoagulation and with CHA2DS2-VASc score ≥2. The primary safety endpoint was device or procedure-related major adverse events (MAE) at 30 days. The primary feasibility endpoint was procedure success along with proper filter positioning in each CCA, also at 30 days.

Additionally, the filter captured six thromboemboli in four patients, none of whom developed stroke symptoms.

Researchers noted an overall per-patient procedural success rate of 92 percent and an 84 percent rate of successful filter deployment. At 30 days, the MAE rate was 0 percent, with minor adverse events occurring in five patients (20 percent). "During an average follow-up of 6 months, there was no evidence of in situ thrombus formation or CCA stenosis," researchers said.

Moving forward, Reddy and colleagues said the CAPTURE findings suggest "deployment of a permanent coil filter in the human CCA is feasible and safe." However, they note the small sample size with only a few operators are limitations to the study.

His-CRT did not demonstrate significant improvements in electrocardiographic or echocardiographic parameters compared with biventricular pacing (BiV) CRT, according to research presented at HRS 2019 and simultaneously published in the Journal of the American College of Cardiology.

Crossover was mandated in patients in the His-CRT group who did not achieve QRS narrowing by >20 percent, QRS width of ≤130 ms or who demonstrated high correction thresholds (>5V@1 ms). While crossover was permitted in patients randomized to BiV-CRT when an LV lead could not be placed, LV lead delivery into the anterior interventricular or middle cardiac veins was discouraged.

Overall results showed no differences in baseline characteristics across the two groups, with the exception that left ventricular ejection fraction (LVEF) was significantly lower in the His-CRT group (median 26.3 percent) vs. the BiV-CRT (30.5 percent).

In other findings, at a median follow-up of 6.2 months, improvements in LVEF relative to baseline were observed in both groups. Overall event rates were also low across both groups (six cardiovascular hospitalizations, two deaths).

Additionally, QLV was reported in 20 of 24 patients receiving BiV across both arms. Patients in the His-CRT group had higher pacing thresholds (median 1.7 V vs. 0.9 V), but not pulse width (median 1 ms vs. 0.5 ms), compared with BiV-CRT patients. His corrective capture thresholds remained stable in up to 12 months of follow-up.

Tung and colleagues noted the study was underpowered to detect differences <10 percent between groups and a type II error cannot be excluded. They suggest that "improved patient selection may decrease crossover rates and larger prospective studies may be useful to assess for smaller differences in effect size between CRT modalities."

Can a Novel Hemodynamic Index Identify AR After TAVR?

The dicrotic notch index (DNI) – a novel hemodynamic measure – may be used after transcatheter aortic valve replacement (TAVR) to identify patients with aortic regurgitation (AR), according to research presented at the Society for Cardiovascular Angiography and Interventions (SCAI) 2019 Scientific Sessions and simultaneously published in JACC: Cardiovascular Interventions.

For each measurement, the researchers obtained and analyzed offline angiographic tracings. Transfemoral access was obtained in 86.2 percent of patients, balloon post-dilation was performed in 43 cases and a valve-in-valve in five cases.

The authors conclude DNI may become an additional tool that, along with transthoracic echocardiogram, can help identify patients who require corrective measures such as balloon post-dilation, valve-in-valve or repositioning when possible.

"While echocardiography after TAVR remains the gold standard for diagnosis of AR, hemodynamic measures such as the DNI allow for simple intra-procedural methods for identifying patients with AR," they write.

Nonselective-His bundle pacing (NS-HBP) was associated with similar outcomes of death or heart failure hospitalizations (HFH) when compared with selective (S)-HBP in patients with ≥20 percent ventricular pacing burden, based on findings presented at HRS 2019 and simultaneously published in JACC: Clinical Electrophysiology.

Researchers, led by Pugazhendhi Vijayaraman, MD, FACC, analyzed 640 patients from the Geisinger and Rush University HBP registries who underwent successful HBP. Patients were categorized into S-HBP (n=118) or NS-HBP (n=232) groups based on QRS morphology at the programmed output at three-months follow-up. The primary outcome was a combined endpoint of all-cause mortality or HFH.

Results found the NS-HBP group, compared with the S-HBP group, had a higher number of men (64 vs. 50 percent) and greater incidences of infranodal AV block (40 vs. 9 percent), ischemic cardiomyopathy (24 vs. 14 percent) and permanent atrial fibrillation (18 vs. 8 percent).

The primary endpoint occurred in 35 percent of patients in the NS-HBP group vs. 19 percent in the S-HBP group. Researchers noted that further subgroup analyses of patients at higher pacing burden or lower left ventricular ejection fraction revealed no incremental risk with NS-HBP.

Looking ahead, Vijayaraman and colleagues recommend additional randomized or risk-matched multicenter studies with long-term follow-up to confirm the clinical benefits of S-HBP vs. NS-HBP in patients needing ventricular pacing.

REVELATION: DCB Noninferior to DES in STEMI For FFR

In the setting of STEMI, a drug-coated balloon (DCB) strategy may be noninferior to a drug-eluting stent (DES) in terms of fractional flow reserve (FFR) at nine months, according to results from the REVELATION trial presented at EuroPCR in Paris and simultaneously published in JACC: Cardiovascular Interventions.

At nine months, the mean FFR value was 0.92±0.05 with DCB and 0.91±0.55 with DES. One abrupt vessel closure requiring treatment occurred in the DCB group. Two patients required nonurgent target lesion revascularization (one in each group). There were no deaths.

The researchers conclude DCB strategy was "safe and feasible." Further, DCB angioplasty "may represent a valuable alternative strategy by which the purpose of truly leaving nothing behind can be accomplished without compromising results."

ACC.org Editor-in-Chief Kim A. Eagle, MD, MACC, adds that due to the small sample size, a much larger study is needed to assess this question.

An abluminal groove-filled biodegradable polymer sirolimus-eluting stent (FIREHAWK) may be as safe and effective as a durable polymer everolimus-eluting coronary stent (XIENCE) at two-year follow-up, according to the TARGET All Comer study presented at EuroPCR in Paris and simultaneously published in JACC: Cardiovascular Interventions.

At the two-year follow-up, target lesion failure occurred in 8.7 percent and 8.6 percent of the FIREHAWK and XIENCE group, respectively. Event rates of individual components of the primary endpoint were also comparable between groups.

Furthermore, landmark analyses between the one- and two-year follow-up revealed there was no statistically significant difference in target lesion failure for the FIREHAWK vs. XIENCE stent. However, beyond one year, very late definite or probable stent thrombosis occurred in three patients in the FIREHAWK group and seven patients in the XIENCE group.

In an editorial, Michael Joner, MD, and Salvatore Cassese, MD, PhD, note that "by now, we must realize that the ambition to detect incremental clinical benefit of one drug-eluting stent over the other is slowly but surely fading with contemporary clinical trial design."

They add, "Yet, our mission to improve patient care will hopefully drive innovation and guide us into a novel era of personalized medicine with well-adapted clinical, scientific and financial incentives."