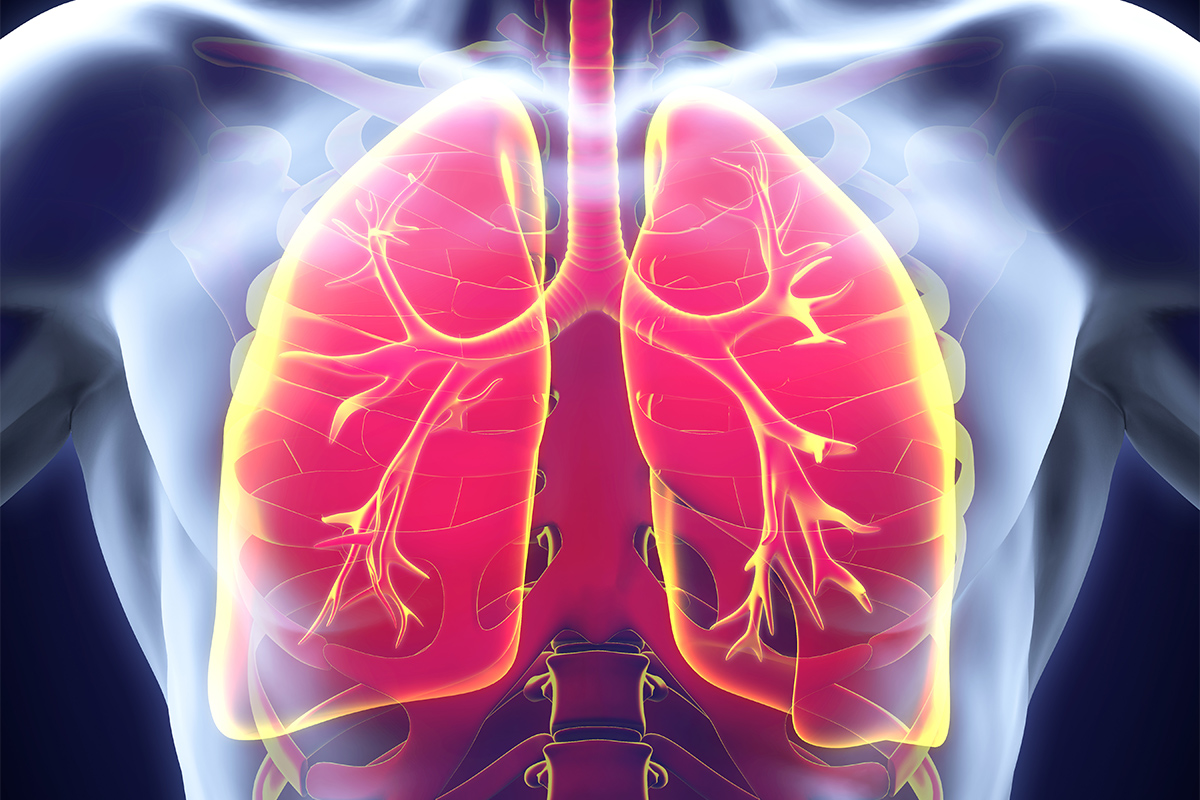 Chronic thromboembolic pulmonary hypertension (CTEPH) is a rare, progressive form of pulmonary vascular disease associated with significant morbidity and mortality.1 Classified as Group 4 within the existing clinical definition of pulmonary hypertension (PH), CTEPH is generally triggered by one or multiple episodes of acute pulmonary embolism (PE) that have not resolved despite ≥ three months of therapeutic systemic anticoagulation.2,3

Incidence rates of CTEPH range between 0.4% to 9.1%, with an annual rate of 3 to 5 cases per 100,000 in the U.S. and Europe.4 In a prospective, long-term follow-up study of 314 patients, about 4% developed CTEPH within two years after a first episode of symptomatic PE.5

The pathophysiology of CTEPH is multifactorial, but thought to be due to a failure of thrombus resolution after an episode of PE.6 When comparing pathology specimens from patients with acute PE and CTEPH, the first consisted of nonadherent, red clots and the second with adherent, yellow clots obstructing blood flow through the pulmonary arteries.6

These chronic clots are highly organized and fibrotic and described as "bands and webs" on pulmonary angiography.7 Previous studies have shown that although mechanical obstruction of proximal pulmonary arteries is often the initial trigger for developing CTEPH, some patients also have pulmonary small-vessel disease with associated vascular remodeling (Figure 1).8 These changes ultimately lead to PH and right heart failure (RHF).9 Patients with CTEPH frequently present with progressive dyspnea and exercise intolerance.4 Due to the high risk of progression to RHF, patients may also have NYHA functional class III to IV symptoms.4

The natural history of acute PE treated with anticoagulation is thrombus resolution within three to six months; a thorough diagnostic workup for CTEPH is warranted if symptoms continue or manifest after this period.10

Due to the nonspecific nature of symptoms and physical findings, the disease is often diagnosed at an advanced stage. In the European CTEPH registry, a median time of 14.1 months elapsed from time of clinical presentation to diagnosis.11

To diagnose CTEPH, clinicians must have a high index of suspicion. A first line screening test is lung ventilation-perfusion scintigraphy, which has a sensitivity of 96-97% and specificity of 90-95%.12-16 This can be supplemented with other imaging modalities such as pulmonary angiography (PA), computed tomography pulmonary angiography (CTPA), and MRI.

PA is considered the gold standard for diagnosis and particularly useful for evaluating the location and extent of small vessel disease.10 It can be combined with right heart catheterization to evaluate mean pulmonary artery pressure (mPAP) and pulmonary capillary wedge pressure, which is defined as ≥25 mm Hg and 15 in this disease, respectively.4

CTEPH is managed using a therapeutic decision-making tree as described by Kataoka et al. (Figure 2).7 After establishing an initial diagnosis, a team of CTEPH experts is ideally tasked with determining if the disease is technically operable or inoperable. 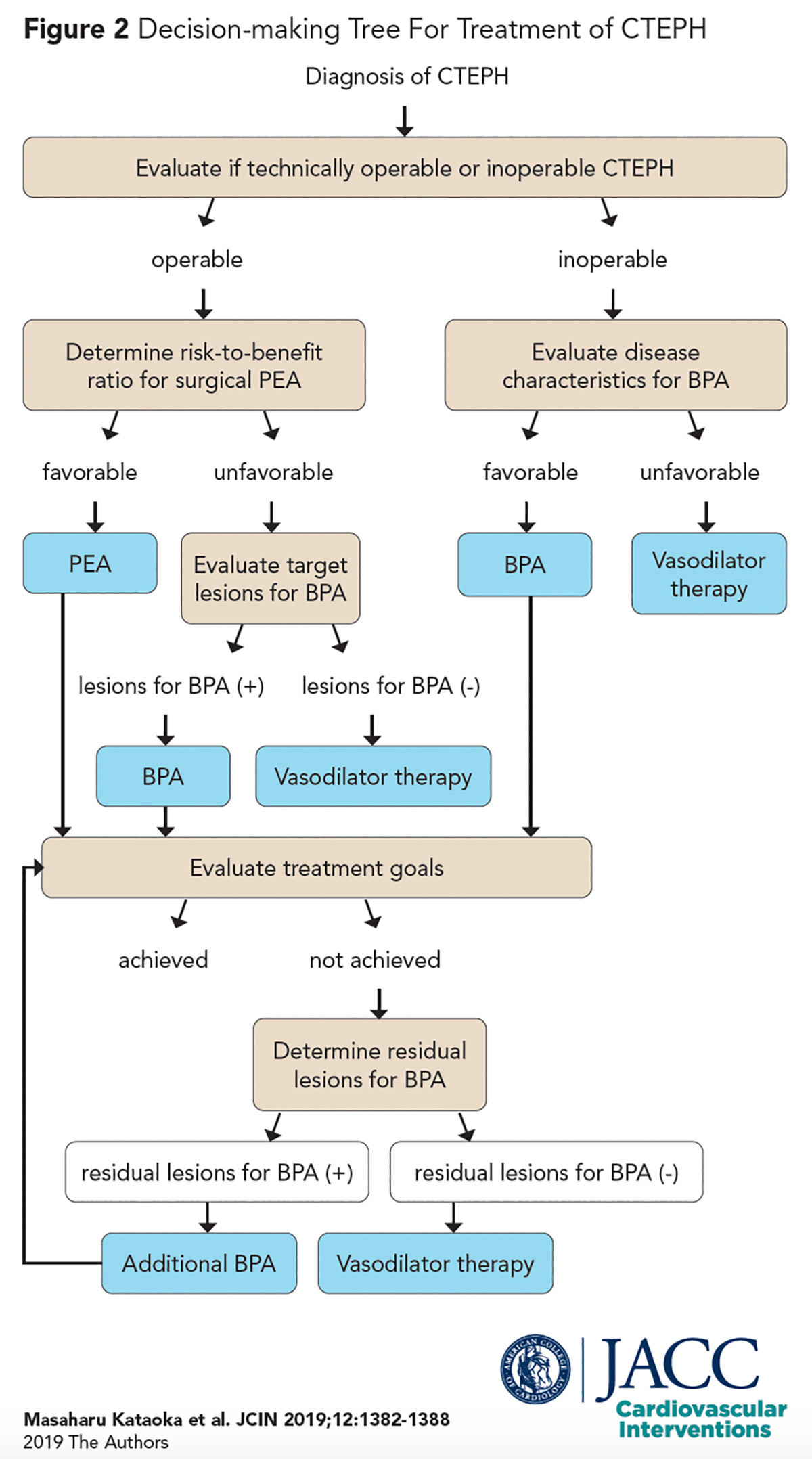 Operability is based on whether there is adequate surgically accessible thromboembolic disease located proximally in main, lobar or segmental arteries, and a lack of extensive distal disease in subsegmental vessels.7

The only established and potentially curative treatment for operable CTEPH is pulmonary endarterectomy (PEA), a highly specialized procedure that involves extricating obstructive emboli from pulmonary arteries.17

Prior to undergoing surgery, preoperative risk stratification is performed by the surgeon, which accounts for factors like patient comorbidities or the disease process itself (e.g., few lesions with severe hemodynamic compromise).7

Data from an interna-tional registry found that 63% of the patients with CTEPH were deemed operable, 36% inoperable due to distal lesions, and of those operable, 57% underwent surgery.11

In a prospective study of 314 patients who survived PEA, 31% had persistent, severe PH defined as mPAP of ≥30 mm Hg.18,19 This is thought to be attributed to coexisting small-vessel arteriopathy that is not addressed by PEA.8 However, the conditional survival rate at five years in these patients was 90%.18

Another prospective study evaluating 157 patients post PEA reported a similar cumulative survival rate of 84% at five years.20 This is a significant improvement from the 30% survival rate in untreated patients.19

Despite its efficacy, PEA is only an option for approximately 60% of patients who lack distal lesions or prohibitive comorbidities.11

Moreover, there is a steep learning curve and the operation is technically challenging, thus limiting its use to highly experienced centers with case volumes of >1,000 operations; in the U.S., the most surgical experience comes from the University of California, San Diego.25

To address these issues, balloon pulmonary angioplasty (BPA), also known as percutaneous transluminal pulmonary angioplasty, was introduced. This minimally invasive treatment uses a balloon catheter to dilate pulmonary stenoses, and it is useful for distal segments left unaddressed by PEA or for persistent/recurrent PH after early failure of PEA.7 It was initially described in 1988 by Voorburg who treated four stenoses by BPA in a single patient.26

As a result of this study and others that reported similarly high rates, BPA did not receive widespread attention.

BPA only reemerged as a viable therapeutic strategy after refinement of the procedure at specialized centers in Japan and Europe, where novel imaging methods and a cautious, stepwise approach were incorporated to optimize outcomes.28-31 With these advances, case series demonstrated efficacy closely matching that of PEA.

Periprocedural mortality also improved in recent years from 3-10%9,28,31,32 to 0–1.5%.33-36 In 2016, the European Society of Cardiology and the European Respiratory Society published guidelines accepting BPA as a therapeutic strategy for patients with technically inoperable disease or with unfavorable risk-benefit ratios (Class IIb recommendation).37

In 2017, the first multicenter study was conducted in Japan and consisted of 308 patients with CTEPH treated with BPA between 2004 and 2013. The study demonstrated improved hemodynamics and decreased pulmonary vascular resistance by over 50% (Figure 1).38 They also found a comparable survival rate to PEA, although the complication rate remained relatively high, with 17.8% of patients experiencing some form of pulmonary injury.38

Since the study by Feinstein et al., there have been few studies on BPA procedures performed at U.S. medical centers. Anand et al., recently published their experience treating 31 patients at Mayo Clinic between 2014 and 2018.27,39

In the first contemporary example of successful BPA performed in the U.S., the study found significant improvements in hemodynamics and pulmonary vascular resistance and demonstrated a low complication rate of 4.0%, with only one patient developing reperfusion injury.

In line with the recommendations from Kataoka et al. to minimize compli-cations, the authors identified precise target lesions by angiography and avoided chronic total occlusions in which anatomic information is lacking about distal vessels.7,39

They also managed activated clotting time closely and performed procedures over multiple sessions to avoid excess use of contrast and reduce radiation exposure. Many of their patients were also on vasodilators, which may improve outcomes for procedures like BPA and PEA.39

In particular, riociguat, a stimulator of soluble guanylate cyclase, is the only PH-specific medication approved by the U.S. Food and Drug Administration.40

It has been shown to be effective in improving hemodynamics and exercise capacity, and is generally used in inoperable/residual CTEPH or as a bridge to surgery in high-risk cases.40,42

The treatment of CTEPH has evolved over the past decade. PEA is considered the only curative therapy for the disease, while medical therapy is used for patients in whom definitive treatments fail. BPA has recently emerged as a minimally invasive alternative to PEA for patients with multiple contraindications.

Single- and multicenter studies around the world have demonstrated the effectiveness and safety of BPA for the treatment of CTEPH. However, there still exists a need for larger, randomized controlled studies evaluating the superiority of BPA over medical therapy for inoperable CTEPH.

There is also a lack of information about the prognosis and long-term outcomes of this procedure, including hemodynamics, functional capacity, survival past five years, risk of restenosis and need for stents. Ultimately, CTEPH registries should be created to gather patient data with the goal of developing and validating objective risk scores to better identify candidates for BPA.

As technology advances, BPA-specific improvements to devices, such as guidewires and balloon catheters, should be made. Finally, standardized approaches to minimize complications will be required, so BPA can be more widely performed and offered as an alternative to patients with otherwise inoperable or residual disease. This article was authored by Aishwarya Raja, BSc, a medical student at the Icahn School of Medicine at Mount Sinai in New York, who is completing a Sarnoff Cardiovascular Research Fellowship at the Smith Center at Beth Israel Deaconess Medical Center (BIDMC) in Boston; and Eric A., Secemsky MD, MSc, FACC, director of Vascular Intervention in the CardioVascular Institute at BIDMC, and assistant professor at Harvard Medical School, and the Smith Center for Outcomes Research in Cardiology at BIDMC.