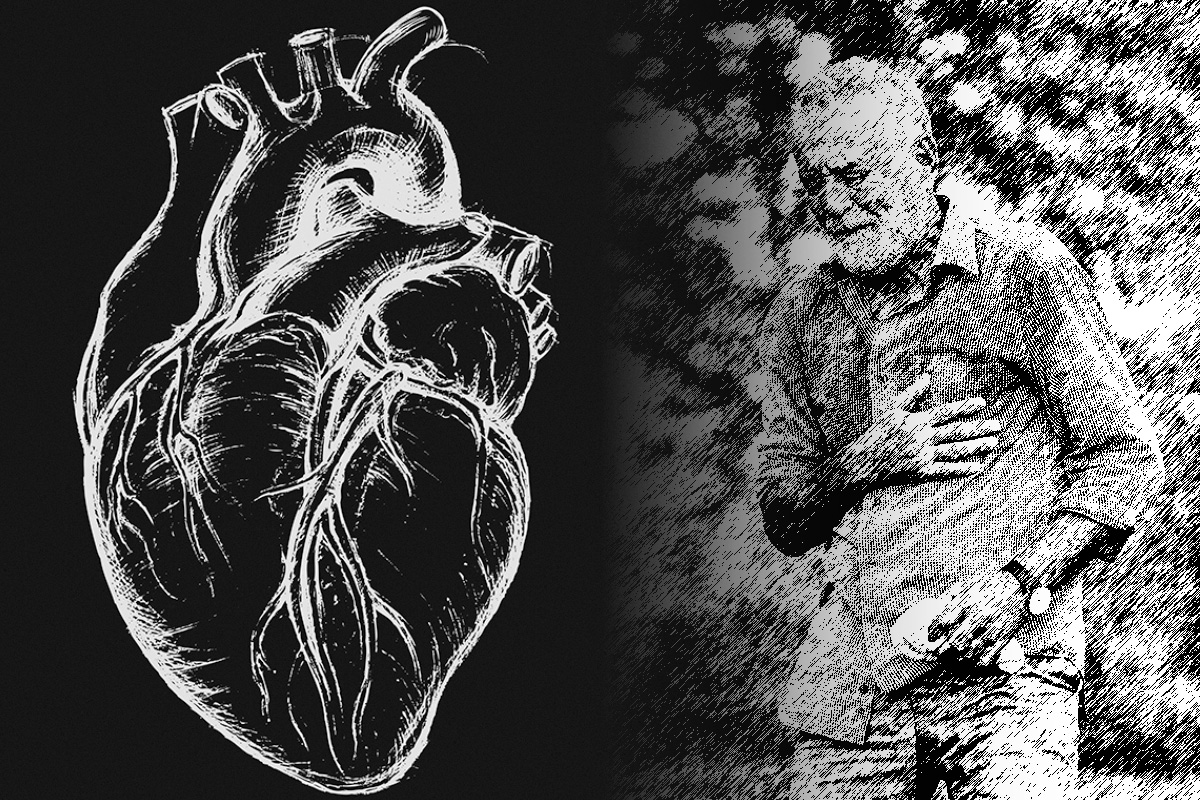 In adults, sudden onset chest pain and palpitations have often heralded impending cardiovascular demise. However, when this presentation is seen in a young, anxious female, the symptoms often become less alarming. Such is the case of mitral valve prolapse (MVP) syndrome, an entity first described in the 1960s that has become associated with prominent features including atypical chest pain, anxiety and MVP.1

Despite the association with sudden cardiac death (SCD), MVP syndrome has largely been viewed as a benign condition and contemporary management continues to advocate reassurance and lifestyle changes.2

For individuals who suffer from the recurrent, disabling symptoms of MVP syndrome and fear its potentially lethal consequences, these medical recommendations have been confusing and insufficient, leading patients to publish their own experiences as they explore unconventional treatment strategies.3

The historically scant literature on MVP syndrome and the associated risk of SCD is likely related to its low prevalence: MVP is estimated to affect only 1% to 2% of the general population and the annual incidence of MVP-related SCD is <1%.4,5

However, over the last decade new multi-modality observations on the structure and function of the mitral valve apparatus have revealed a potential underlying mechanism for the arrhythmic manifestations in MVP syndrome. This new entity, termed arrhythmic MVP or malignant MVP, is associated with biphasic or inverted T waves in the inferior ECG leads, complex or pleomorphic premature ventricular contractions (PVCs), and PVC-triggered ventricular fibrillation (VF).6,7 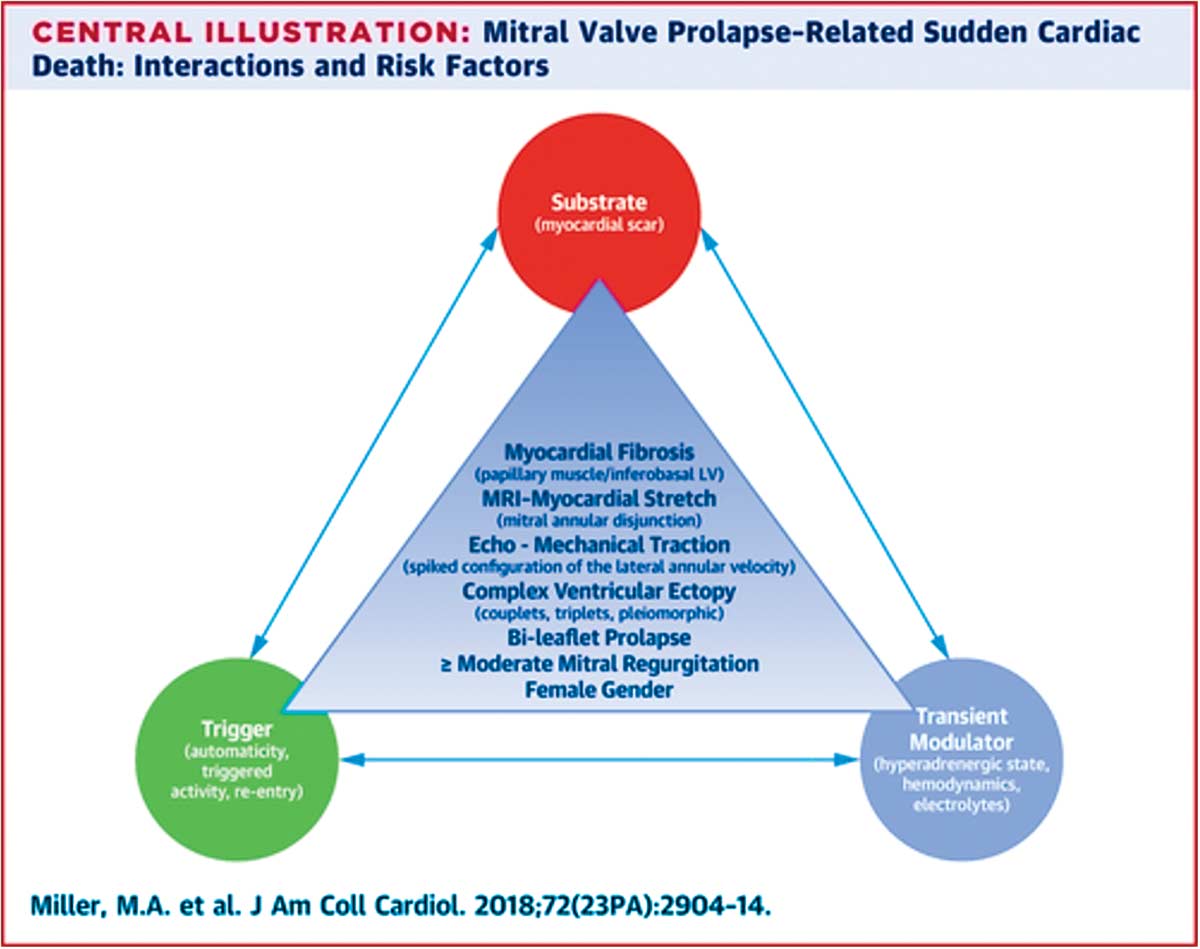 On cardiac MRI, late gadolinium enhancement consistent with fibrosis has been demonstrated around the endocardial region of the mitral annulus and papillary muscles.

In the subset of MVP syndrome patients who have undergone electrophysiology study (EPS), fractionated, split and delayed signals were detected from diseased Purkinje tissue adjacent to papillary muscle fibrosis, providing a target for catheter ablation (Figure 2).8

Overall, these findings suggest that the risk of sudden cardiac death in arrhythmic MVP is likely related to the interaction between a diseased underlying myocardium, an arrhythmic trigger, and a transient systemic state.6 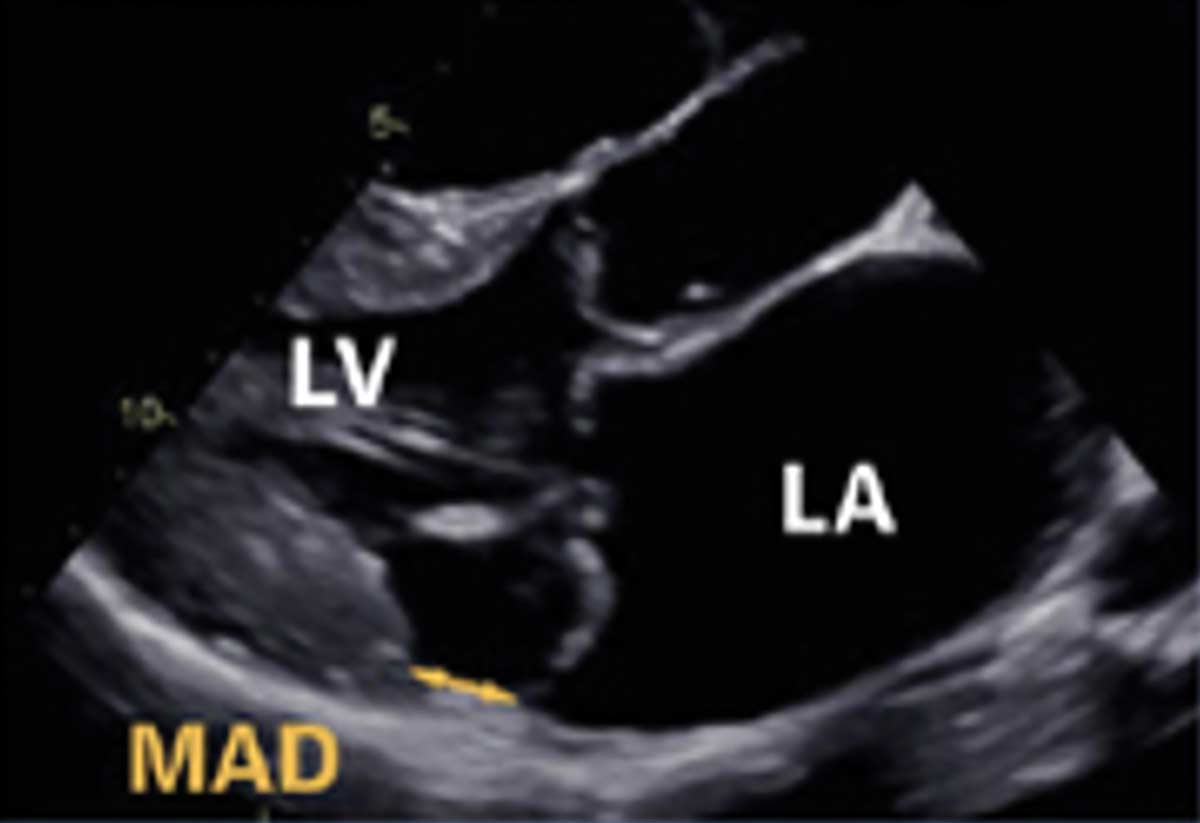 A potentially associated condition with arrhythmia MVP is mitral annular disjunction (MAD). MAD was first described in 1981 and, like MVP, has been linked to an increased risk of ventricular arrhythmias and was a poorly understood disease process until the last several years.9

MAD is characterized by abnormal atrial displacement >1 mm of the hinge point of the mitral valve away from the ventricular base (Figure 3). This displacement can either be focal, scattered around the mitral annulus, or continuous along a circumferential segment.

A recent study revealed that 10% of patients with MAD demonstrated severe ventricular arrhythmias, including aborted cardiac arrest and sustained ventricular tachycardia (VT). Similar with arrhythmic MVP, MAD was more frequently seen in young, healthy individuals and the risk of ventricular arrhythmias in MAD was related to PVC burden and papillary muscle fibrosis.

However, 22% of MAD patients did not have MVP and the presence of MVP in MAD was not associated with severe ventricular arrhythmias. This dispelled the notion that arrhythmogenesis required the presence of MAD and MVP, but it did suggest that one entity could be a precursor to the other.10

Despite the increased awareness of SCD in MVP, the management of arrhythmic MVP remains unclear beyond surveillance with advanced imaging and extended telemetry monitoring, and initial treatment with beta-blocker therapy. Invasive strategies to reduce SCD, particularly for primary prevention, have not been validated by large-scale trials or guidelines, but have been described in the literature.

In high-risk patients with a history of suspected arrhythmic syncope, frequent PVCs, and localized myocardial scar, an EPS with reproducible induction of sustained ventricular arrhythmias can identify individuals who could benefit from ICD implantation.

For individuals with recurrent PVC-triggered VF, an electrophysiology study may localize the triggering PVC to the papillary muscles or adjacent areas of scar, and highlight a focal substrate that is amenable to catheter ablation (Figure 4). 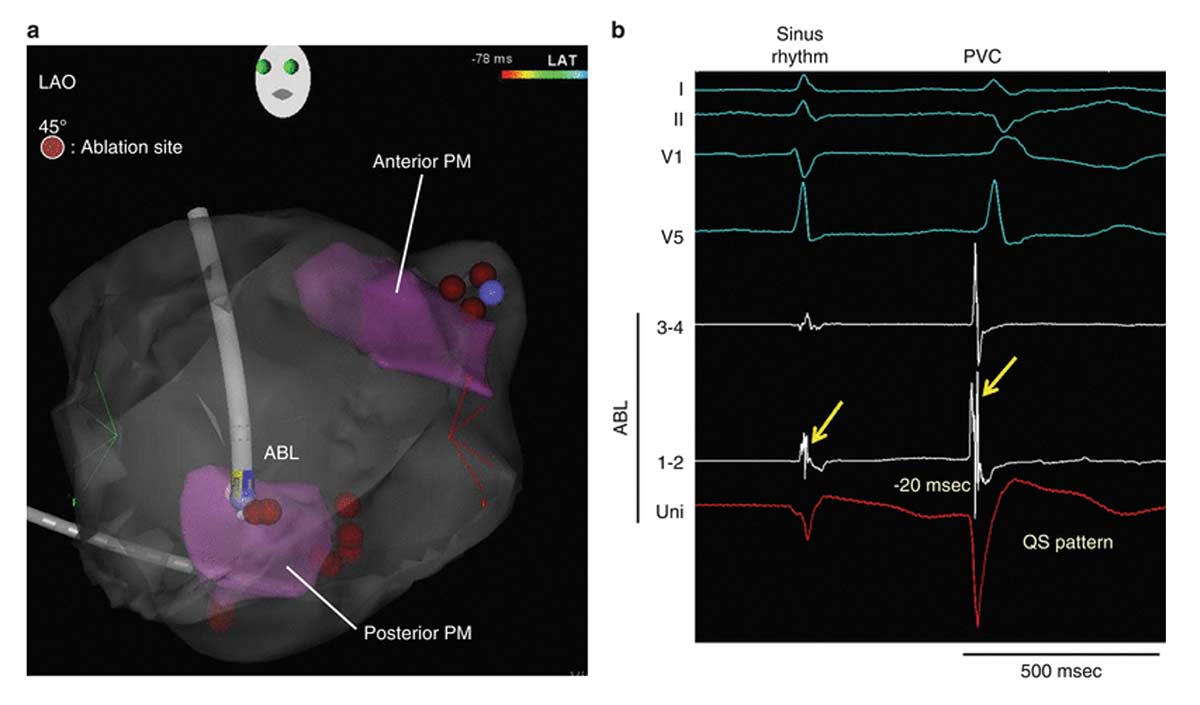 Premature ventricular contractions (PVCs) arising from the left ventricular (LV) posterior papillary muscle. (a) Intracardiac echocardiography- deﬁned LV endocardial surface and papillary muscles integrated into the 3-dimensional electroanatomical mapping (CARTO3®, Biosense Webster). The ablation catheter (ABL) is positioned at the base of the posterior papillary muscle. (b) Intracardiac recordings at the ablation sites. The earliest activation during the PVC was found near the base of the posterior papillary muscle. The local activation time during the PVCs preceded the QRS onset by 20 ms. After 28 applications of radiofrequency energy at and around this site, no further PVCs spontaneously occurred. The ablation catheter was an irrigation catheter (ThermoCool®SMARTTOUCH™, Biosense Webster). The energy and duration were 30–45 W and up to 70 s for each application. In total, 28 radiofrequency energy applications were required for a cure.

In patients with significant MVP and mitral regurgitation, mitral valve repair has been hypothesized to reduce the risk of SCD by not only addressing the underlying substrate to promote ventricular remodeling but also alleviating myocardial distention as an arrhythmic trigger.6

On the Road to a Treatable Entity 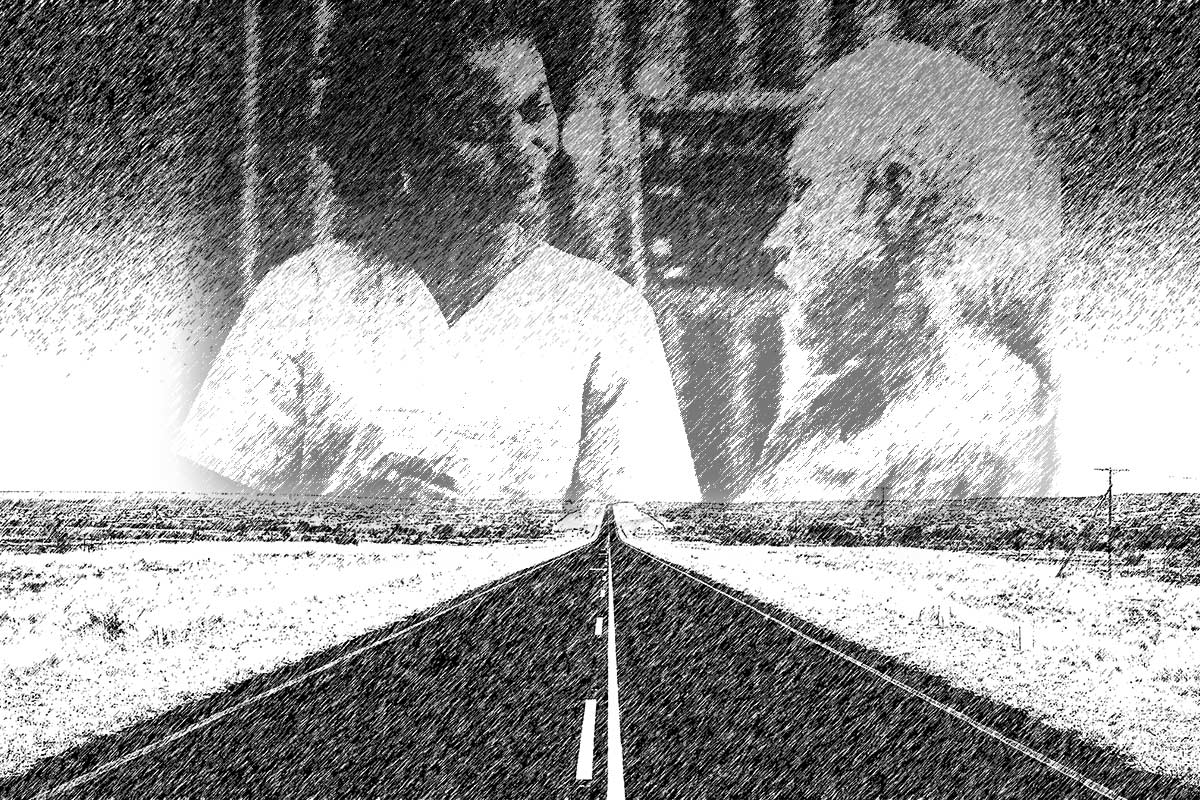 Although our understanding of MVP remains incomplete, we have come a long way in appreciating the interplay of the electrical, mechanical, and systemic drivers that contribute to the development of MVP-related SCD. The entity arrhythmic MVP acknowledges that MVP is unlikely a primarily psychiatric condition with cardiovascular overtones but instead a cardiovascular condition likely contributing to psychological distress.

Ongoing investigations are occurring at the basic science level to explore the genetic basis for arrhythmic MVP, at international conferences such as VT Symposium 2020 to discuss novel catheter ablation strategies to address arrhythmic MVP, and at dedicated institutional programs such as the Mitral Valve Repair Center at Mount Sinai Hospital to evaluate surgical treatment options for MVP. Similar with inappropriate sinus tachycardia, arrhythmic MVP may one day become a treatable condition with a clearly identifiable arrhythmic substrate and targeted interventions to provide relief for afflicted individuals.

YOU ARE HERE: Home > Latest in Cardiology > Mitral Valve Prolapse Syndrome: Once Benign and Now Malignant