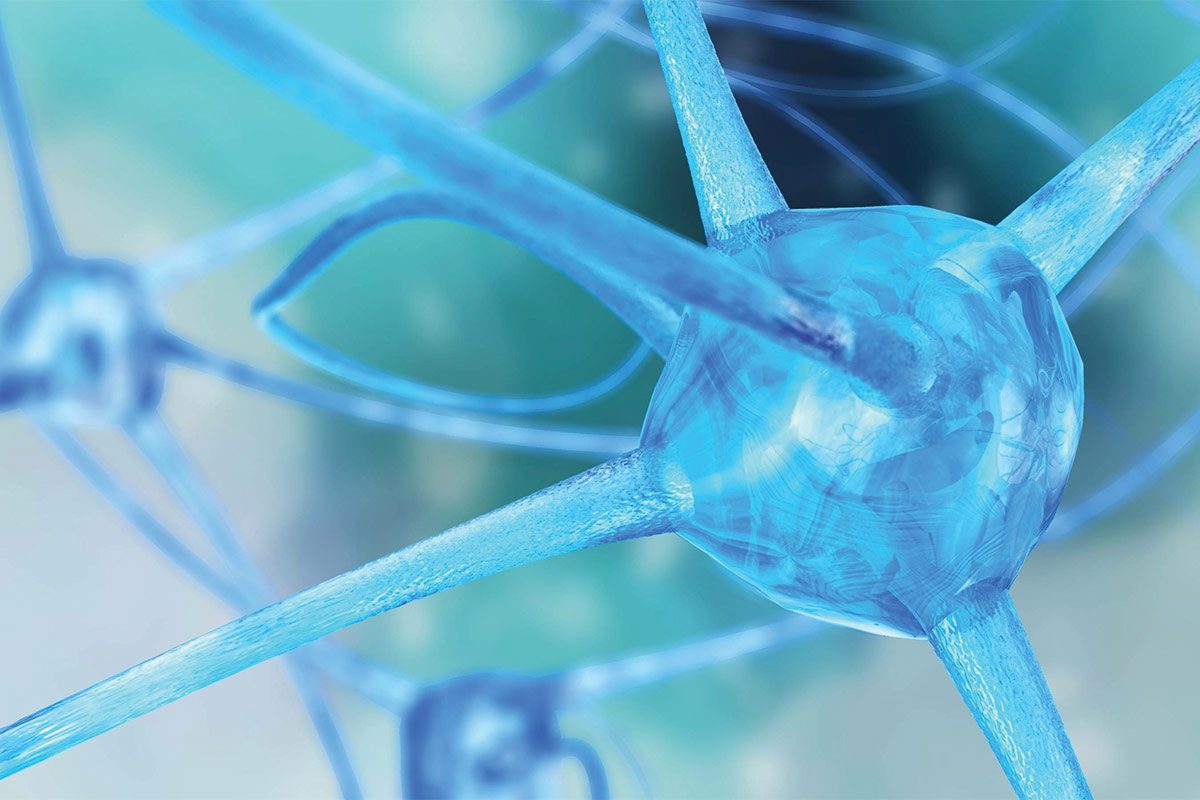 As a cardiac electrophysiologist my most satisfying procedural outcomes have always involved ablation of a discrete anatomical substrate, such as the cavotricuspid isthmus in patients with typical atrial flutter, an accessory pathway in patients with atrioventricular (AV) reentry tachycardia or the earliest site of electrical activation in an outflow tract premature ventricular contraction. In each of these instances, successful injury to the relevant cardiac tissue is sufficient to prevent arrhythmia recurrence.

However, for some arrhythmias the anatomical ablation strategy may not adequately suppress arrhythmia recurrence, such as with pulmonary vein isolation (PVI) in paroxysmal atrial fibrillation (AFib), or the target area for ablation may be undesirable, such as the sinus node in inappropriate sinus tachycardia. In other conditions, such as cardioinhibitory vasovagal syncope (VVS), a relevant ablation site may not be apparent.

The common denominator in these challenging arrhythmia cases is often the involvement of the autonomic nervous system (ANS). It is now understood that dysregulation of either end of the ANS, whether extreme vagal tone or extreme sympathetic surge, can be proarrhythmic. In some circumstances, the underlying cardiac tissue may appear anatomically normal but the functional response of the tissue to neural regulation can be diseased.

Anatomy of the Cardiac ANS

The afferent and efferent neural connections between the head and the heart can be organized into three anatomical levels: the brainstem and spinal cord, extracardiac-intrathoracic ganglia and the intrinsic cardiac nervous system (ICNS).

The efferent neural connections are further categorized as sympathetic or parasympathetic. The sympathetic pathway includes the stellate ganglion, a fusion of C8 and T1 ganglia, and the paravertebral ganglion, residing between T2 and T4 of the spinal vertebrae, which relay signals between the spinal cord and the ICNS. The parasympathetic pathway utilizes the vagus nerve to relay signals between the brainstem and the ICNS. The ICNS is composed of a network of ganglionated plexi (GP) that are scattered through each cardiac chamber and are capable of not only relaying signals to and from the remote extracardiac ganglia but can also independently regulate local neurologic responses. The left atrium notably contains five GP, with one GP located near the ostium of each of the four PVs and an additional GP associated with the ligament of Marshall.

The increasing recognition of the ANS in arrhythmia management has renewed interest in the field of cardiac neuromodulation. Historically, cardiac neuromodulation had been employed as rescue therapy in patients with electrical storm (ES) from ventricular tachycardia (VT) refractory to AV nodal agents, antiarrhythmic medications and heavy sedation. These individuals were often either too sick to tolerate VT ablation or VT ablation had already failed. In such cases, stellate ganglion blockade (SGB), thoracic epidural anesthesia and cardiac sympathetic denervation were considered to further reduce sympathetic input to cardiac tissue.

In a systematic review of 38 patients with ES, SGB led to a significant reduction in ventricular arrhythmias (12.40 ± 8.80 episodes/day vs. 1.04 ± 2.12 episodes/day; p<0.001) and a significant reduction in external or ICD-delivered shocks (10.00 ± 9.10 shocks/day vs. 0.05 ± 0.22 shocks/day; p<0.01). In a similar fashion, interference of sympathetic signaling with thoracic epidural anesthesia and cardiac sympathetic denervation also have been reported to significantly reduce ventricular arrhythmia burden in patients with ES.1 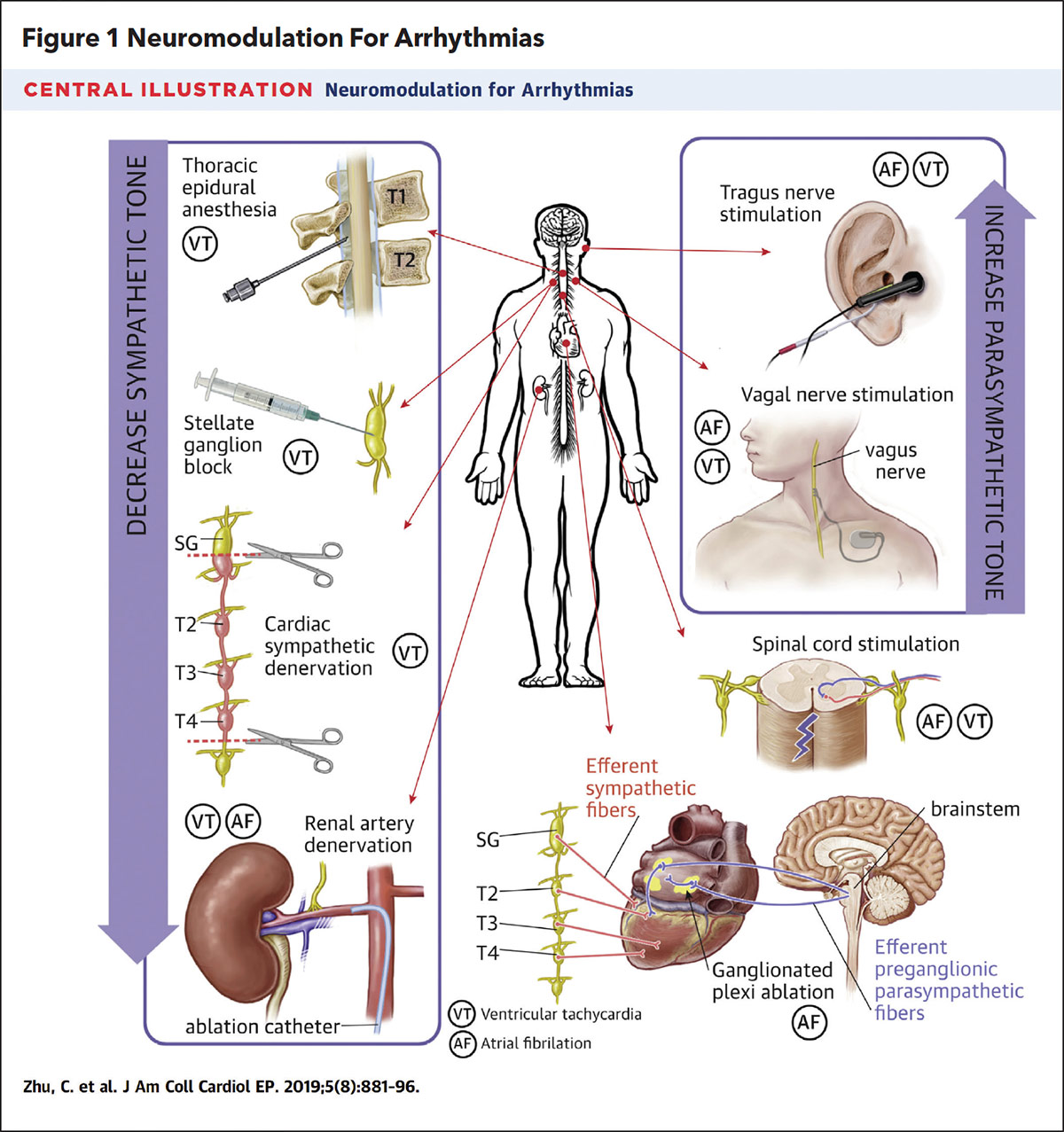 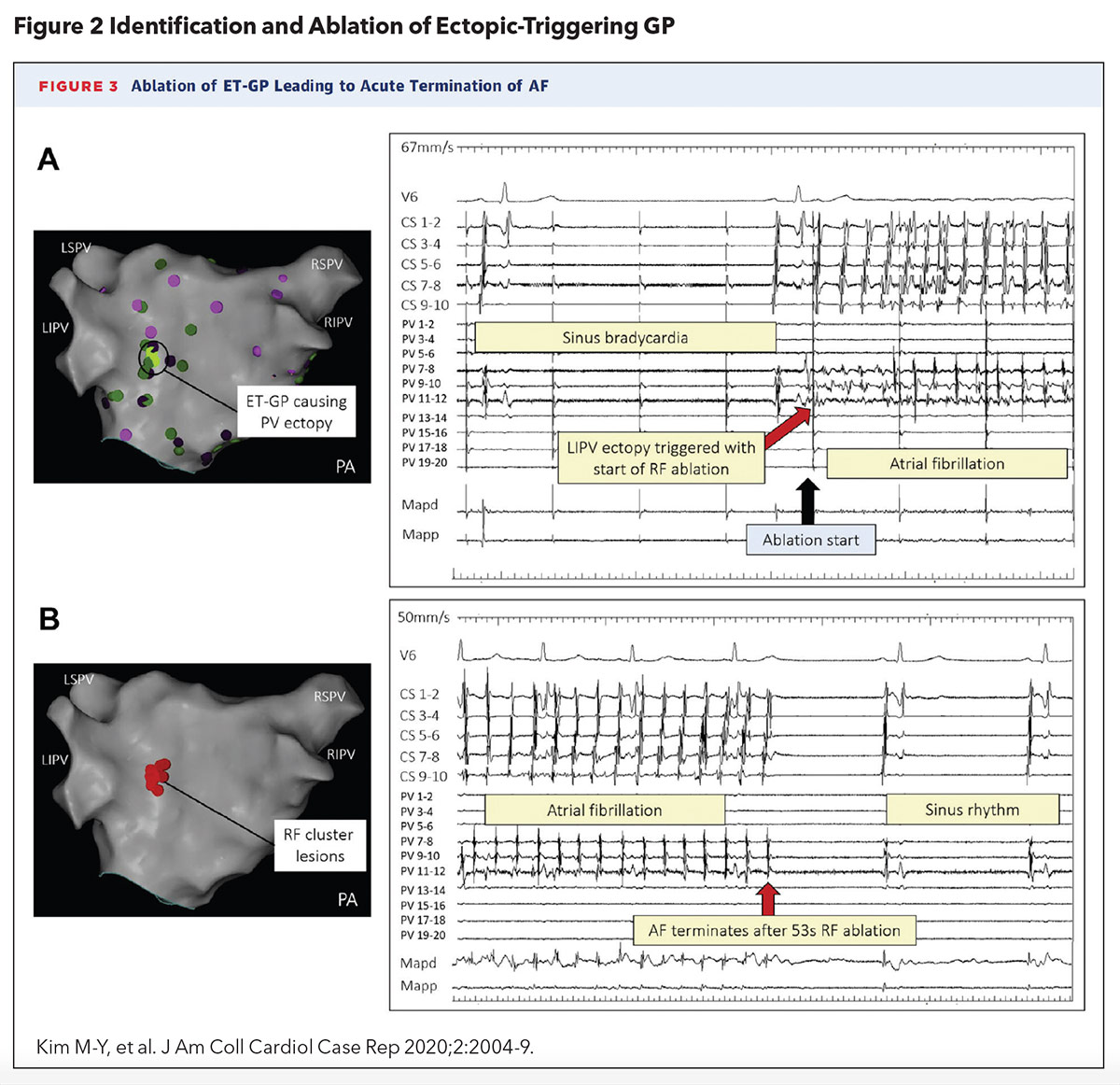 For atrial arrhythmias, cardiac neuromodulation has focused on suppression of the parasympathetic tone from the GP of the ICNS using catheter ablation (cardioneuroablation; Figure 1). In animal studies, parasympathetic stimulation via the vagus nerve or from cholinergic administration was associated with shortening of atrial tissue refractoriness, shortening of the atrial propagation wavelength and increased inducibility of sustained AFib.1

A 2020 case report by Kim, et al., was the first to describe the successful localization and ablation of a single ectopy-triggering GP to suppress AFib in a 58-year-old woman with drug-refractory paroxysmal AFib (Figure 2). The approach utilized an ablation catheter to deliver high-frequency stimulation (HFS) to the left atrial endocardium to identify AV-dissociated GPs during AFib (defined as causing asystole or >50% prolongation in the average R-R interval during HFS) and ectopy-triggering GPs during sinus rhythm.

An ectopy-triggering GP near the ostium left inferior PV was found to reliably initiate AFib and ablation of this culprit GP led to termination of AFib. Interestingly, PVI was not necessary to suppress further AFib.2

The subsequent 2021 GANGLIA-AF study, a randomized clinical trial conducted by the same research group, assigned 102 patients with paroxysmal AFib to either GP ablation alone or PVI. At 12 months, there was no significant difference in freedom from atrial arrhythmia recurrence between patients who had undergone GP ablation alone and PVI (50% vs. 64%; p=0.09). The average procedure time was significantly longer for GP ablation compared with PVI (181.3 ± 33.5 vs. 127.5 ± 33.2 minutes; p<0.0001) but the average ablation time was significantly shorter for GP ablation compared with PVI (22.9 ± 9.9 minutes vs. 38.0 ± 14.4 minutes; p<0.0001).3

Cardioneuroablation is also emerging as a therapy for VVS. VVS is a manifestation of the Bezold-Jarisch reflex, which leads to excessive parasympathetic tone stimulation and/or sympathetic suppression and results in bradycardia, AV block and/or hypotension. Experimental studies have revealed that radiofrequency ablation of the culprit GPs in the atrium can lead to vagal denervation and successfully prevent recurrent syncopal episodes.

A 2020 case report by Lu, et al., was the first in the U.S. to describe the successful localization and ablation of AV-dissociated GPs to prevent syncopal episodes, in a 52-year-old woman with recurrent VVS, confirmed by tilt-table testing, that was refractory to medical, behavioral and pacemaker therapy (Figure 3). This approach also utilized an ablation catheter to deliver HFS to the left and right atrial endocardium to identify AV-dissociated GPs (defined as causing AV block, asystole or >50% prolongation in the average R-R interval). Six culprit GP sites were identified and ablated. No prodromal or syncopal episodes were reported at 18 months of post procedure follow-up. Repeat tilt-table testing at one month and one year post procedure failed to provoke syncope as well.4 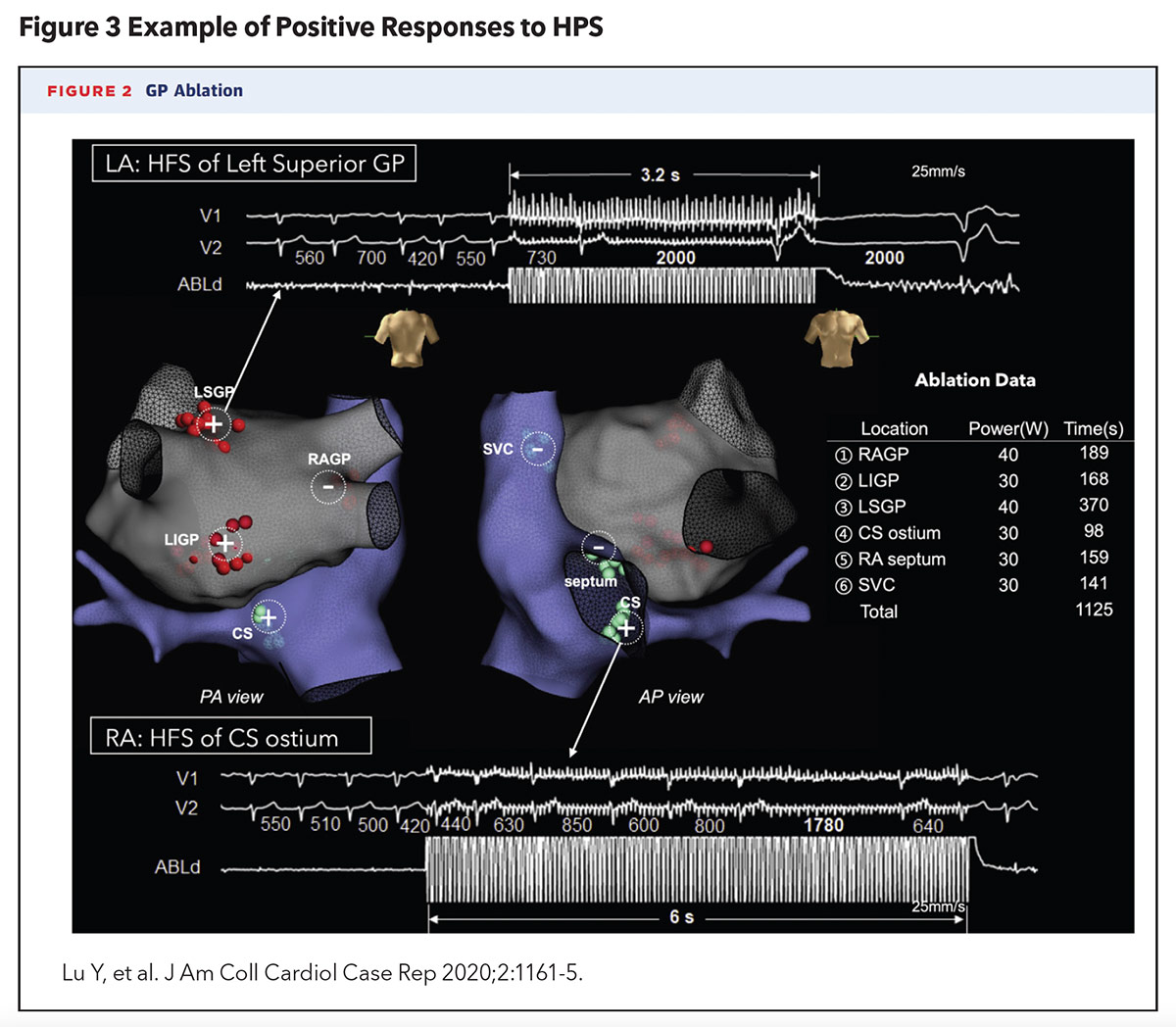 If cardioneuroablation proves to be as effective as it is touted to be, it will revolutionize the management of dysautonomia-associated arrhythmias. The subset of patients with refractory symptoms who continue to suffer from conditions such inappropriate sinus tachycardia and VVS may finally have a definitive treatment to look forward to. Eventually, perhaps, even everyday stressors that cause performance anxiety, palpitations or chest discomfort could be  amenable to neuromodulation. With cardioneuroablation, we may all be able to have nerves of steel one day.

YOU ARE HERE: Home > Latest in Cardiology > Focus on EP | Head to Heart: A New Frontier in Arrhythmia Management