One of the most anticipated trials of revascularization in stable coronary artery disease (CAD) was presented at AHA 2019. ISCHEMIA enrolled 5,179 patients with stable CAD and moderate-to-severe ischemia on either stress imaging or exercise tolerance test and preserved ejection fraction.

Patients were randomized to a strategy of invasive coronary angiography followed by revascularization on top of optimal medical therapy (OMT) vs. an initial conservative strategy of OMT alone.

In the median 3.3 years of follow-up – and up to five years – overall there was no difference in survival. However, patients with angina at baseline and randomized to the invasive strategy reported they felt better.

In my view, the most practical part of the study was that the majority of patients was not that symptomatic and reported angina symptoms only once or twice a month. Yet they had stress imaging or exercise tolerance testing that showed severe (50 percent), moderate (33 percent) or mild (12 percent) inducible ischemia with a normal ejection fraction.

I'd like to start by saying that ISCHEMIA is not a negative trial or a positive trial. It's a trial that takes us one step closer to understanding patients with stable CAD. It validates what the majority of us have been practicing – a focus on patient symptoms – and highlights the importance of shared medical decision-making between physicians and patients.

Randomizing patients prior to the invasive coronary angiography was an important step to eliminate potential treatment bias. This is one of the major differences in design between the ISCHEMIA and COURAGE trials.

Indeed, had the cardiologists seen the angiogram prior to randomization, they likely would have changed the management plan and randomization, especially for patients with severe CAD by sending them to the invasive arm.

I was hoping to see that every enrolled patient received coronary CTA; however, creatinine clearance was a limitation in a quarter of patients. This becomes more important after knowing that 8 percent of the CTA cohort was not randomized due to severe LM disease! Moreover, the rate of LM disease may be higher in patients who did not undergo CTA due to chronic kidney disease.

ISCHEMIA confirms what previous trials have shown: OMT is safe and essential to help patients with stable CAD improve their quality of life (QoL), with or without early intervention. The findings also are reassuring regarding the early invasive strategy, because it showed that early revascularization is safe for patients who have limited tolerance to medications or those who have persistent symptoms despite medical therapy.

My personal approach to stable CAD patients after the ISCHEMIA trial findings is:

It is important to note that ISCHEMIA results do not apply to patients with class III or IV angina, accelerating angina or those presenting with acute coronary syndrome. Also, since ISCHEMIA included only patients with normal ejection fraction, the findings of this trial do not apply to patients with heart failure or reduced ejection fraction, or those with LM disease. The recommended treatment strategy for this cohort of patients continues to be early intervention plus medical therapy.

GALILEO is another important trial with findings that are very relevant to daily practice. The trial intended to answer a clinical question related to the role of anticoagulation post transcatheter aortic valve replacement (TAVR) given the risk of leaflet thrombosis seen on CTA performed within the TAVR trials. GALILEO was stopped early for safety issues.

Among patients who underwent successful TAVR and were not on chronic oral anticoagulation, a 10 mg daily rivaroxaban-based antithrombotic strategy in GALILEO was associated with higher risk of death or thromboembolic events and bleeding compared with antiplatelet therapy.

The findings of this study confirm the importance of inflammation as an underlying process for atherosclerosis. Whether colchicine should be used routinely post MI is yet to be confirmed by other trials.

I don't think the current acute coronary syndrome (ACS) guidelines will implement colchicine based on one trial. However, it is one step closer to understanding the importance of inflammation as one of the main mechanisms for atherosclerosis. It also emphasizes the importance of powerful lipid-lowering drugs and powerful anti-inflammatory drugs in patients with high plaque burden or those post ACS. 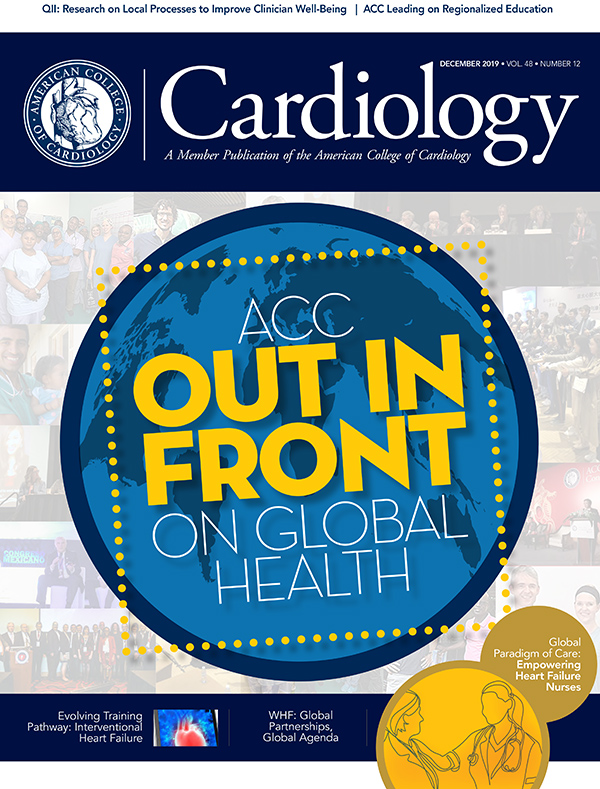 YOU ARE HERE: Home > Latest in Cardiology > Feature | AHA 2019: My Top Interventional Takeaways